The aim of this section of the website is to remember the men and women of the county of Pembrokeshire who gave their lives during both World War 1 and World War 2.

This site is mostly geared up toward men who fought in the Great War, due to the tremendous amount of research material available, but the men of World War II are not forgotten, being also remembered on this website, and more information will be added as it becomes available. These men are harder to research, as their Service Records are not yet available to the general public, so this will be an ongoing project. 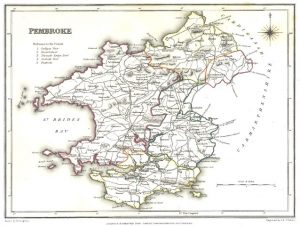 Estimated Casualty Figures For The County

The Men of Pembroke (County) War Memorial in Haverfordwest was erected at Salutation Square in Haverfordwest, in honour of the 1,300 men of the County who gave their lives during the Great War of 1914-1918. The memorial was moved to its present location near County Hall some years ago, due to redevelopment. Ensuing research has uncovered many more, so these extra men and women will be listed on the pages of the village where they had connections to, and their omission from the memorials will be noted.

To see details about each war memorial please click on the relevant link below: