Crundale is a small village situated along to the B4329 road to Fishguard, a mile north of Haverfordwest. The men of the village who fell during both World Wars are commemorated on a stone tablet which is set into the wall of a private house in the village. There are also several memorials inside the Church, which commemorate these men. The same men are also commemorated on the War Memorial at nearby Rudbaxton. The photographs of all of the memorials were kindly sent in by Mike Berrell. 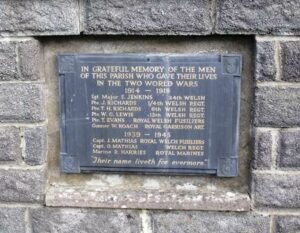 Edwin Jenkins, Company Sergeant Major, 320011, Welsh Regiment. Edwin was born at Walwyn’s Castle, and enlisted at Haverfordwest into the Pembroke Yeomanry prior to the war, with the service number 133. The Pembroke Yeomanry formed at Tenby for war on 4 August 1914, before moving to the Norfolk coast as a Garrison unit. During March 1916 the battalion sailed for Egypt, where the South Wales Mounted Brigade became absorbed in 4th Dismounted Brigade. On 2 February 1917 the battalion merged with the 1/1st Glamorgan Yeomanry, and formed the 24th (Pembroke and Glamorgan Yeomanry) Battalion, Welsh Regiment in 231 Brigade, 74th Division. The Division then took part in the Palestinian campaign, and was present at the Battle of Gaza, and the capture of Jerusalem in December 1917. In May 1918 the Division moved to France, and took the line on the Lys. Later that year it moved to the Somme, and took part in the Battle of Épehy, where the 24th Welsh was tasked with the capture of the Hindenburg Outpost defences at Gillemont Farm on 21 September 1918. Edwin must have been one of the many casualties suffered by the battalion that day. He died of wounds on 26 September 1918 at a Casualty Clearing Station, and is buried at Honnechy British Cemetery, France, in Grave II. C. 50. 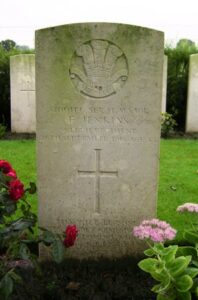 Walter George Lewis, Private, 54170, Welsh Regiment. Walter was the son of Thomas and Ellen Lewis, of Poyston Cross, Haverfordwest. He enlisted at Haverfordwest into the army, and was posted to the 13th Battalion, Welsh Regiment, which was in France as part of 114 Brigade, 38th (Welsh) Division. The Division had been in France since December 1915, and had been initiated into trench warfare in the Fleurbaix Sector. In June 1916 it moved to the Somme, where it took part in the famous capture of Mametz Wood between 7-11 July 1916. After a month in reserve at Hebuterne, the Division moved to Ypres, where it was to hold the line at Boesinghe for the next year, taking part in the opening of the Battle of Passchendaele, when the Welsh captured Pilckem Ridge. After spending the winter at Armentieres, the Welsh were moved back to the Somme in March 1918, and took the line at Aveluy Wood, north of Albert. From here on 22 August 1918 the Division launched their drive across the old battlefields of 1916, towards the mighty Hindenburg Line. Walter was killed just over a week into the great offensive, during the Battle of Morval on 1 September 1918. He was just 19 years old, and is buried at Morval British Cemetery, France, in Grave Ref. A. 18. 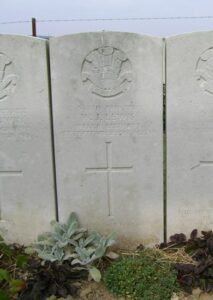 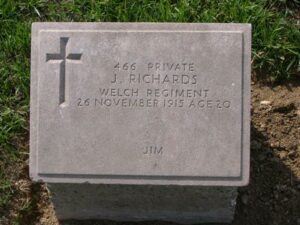 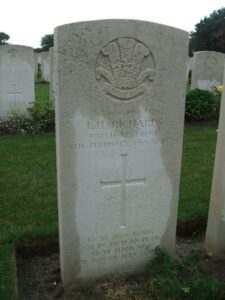 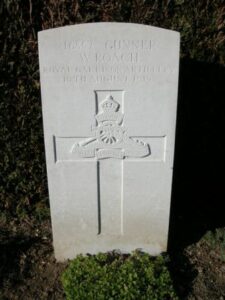 Redvers Joseph Harries, Marine, PO/X105411, Royal Marines. Redvers was born on 27 March 1921, the son of Benjamin John Harries and Martha Ann Harries (nee Sinnett), of Crundale. He served with the Portsmouth Division, Royal Marines, but at present little else is known of him. Redvers died of injuries sustained following a fall at Winchester on 23 April 1943, at the age of 22, and is buried at Crundale Congregational Chapelyard, in the North east corner. 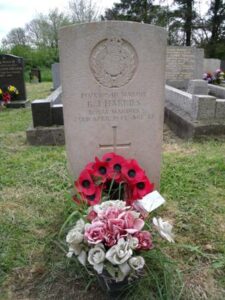 John Percival Mathias, Captain, 177652, Parachute Regiment. John was the son of Thomas Henry and Maggie Mathias, and the husband of Gladys Emma Mathias, of Milford Haven. He originally served with the 10th Battalion, The Royal Welch Fusiliers, which was converted to the 6th Battalion, The Parachute Regiment. John took fought with the battalion in North Africa, and took part in the landings at Sicily, and was killed on 10 September 1943 during the invasion of mainland Italy, when HMS Abdiel was bombed and sank in Taranto Harbour. He was 30 years old, and is commemorated on the Cassino Memorial, Italy.

Owain Ernest Mathias, Lieutenant, 117951, Glider Pilot Regiment. Owain was the son of Lieutenant-Colonel Thomas George Mathias, DSO, and Mrs. Mathias, of Crundale, Pembrokeshire. He was originally commissioned into the Welch Regiment on 10 February 1940, before being attached to the King’s Shropshire Light Infantry. From there, Owain volunteered for service with the 1st Glider Pilot Regiment, where he embarked on a 12 week course to become a pilot, followed by another 12 weeks training on the Hotspur Glider. The 1st Glider Pilot Regiment was then sent to the Mediterranean, where they took part in the invasion of Sicily, called Operation Husky, and it was here, during the opening of the assault, that Owain was killed on 9 July 1943, when his glider became one of 69 to crash into the sea. He was 23 years old, and is commemorated on the Cassino Memorial, Italy, on Panel 12.