Nevern is a small village in North Pembrokeshire, situated off the A487 between Fishguard and Cardigan. The village has ancient origins. The Church is named after St. Brynach, and its churchyard contains a legendary bleeding Yew tree, several ancient Celtic stones, and a fine Celtic Cross. The Nevern War Memorial takes the form of a brass plaque, which is fixed next to the organ inside the Church and commemorates those who fell and also those who survived. The plaque was presented to the Church during Easter 1920 and was unveiled by the Bishop of St. David’s on 11 November 1920. 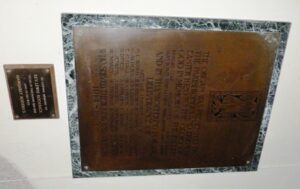 Alan Bowen, Lieutenant, Manchester Regiment. Alan was the son of Essex Bowen and Edith Ann Bowen (nee Melhuish). His father was from Nevern, but Alan had been brought up in Cheshire, and resided at 8, Princess Terrace, Oxton, Birkenhead prior to the war, where he worked for the Liverpool London & Globe Insurance Company. He was commissioned into the 8th Battalion, Manchester Regiment on 18 August 1914, which was being formed at Ardwick, as part of Manchester Brigade, East Lancashire Division. The division was sent to the Mediterranean to counter the threat from the Turkish forces in the Middle East, and landed at Alexandria on 25 September 1915. On 6 May 1915 the 8th Manchesters landed on Gallipoli, and became part of 127 Brigade, 42nd (East Lancashire) Division. The battalion remained here over the coming months, and it was on Gallipoli that Alan was killed in action on 7 August 1915. He was listed in the London Gazette as promoted Temporary Captain on 8 August 1915, just a day after his death. Alan was 36 years old, and is commemorated on the Helles Memorial, Gallipoli. 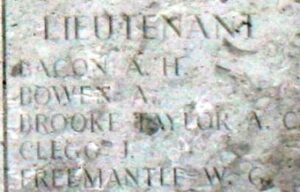 Eynon George Arthur Bowen, Lieutenant, Royal Flying Corps. Eynon was born on 19 August 1893, the son of Eynon George Rice Bowen and of Georgina Catherine Bowen, of Troedyraur, Cardiganshire. He had been a Scholar at Sherborne School, and had later attended the Royal Military Academy at Woolwich as a Cadet, before being gazetted Second Lieutenant into the Royal Garrison Artillery in December 1913. Eynon went to France with the RGA during June 1915, then volunteered for service with the Royal Flying Corps just two months later, qualifying first as an Observer, then as a Pilot on 6 March 1916. When he returned to the front he was posted to 22 Squadron. On 8 September 1916, Eynon was flying his FE2b, Serial 4921, with Lieutenant Robert Macallan Stalker acting as Observer, over Flers on the Somme Battlefield, when they unfortunately became a target for the German Ace, Oswald Boelcke, the man who trained Baron Manfred von Richtofen. Boelcke in his more able aeroplane shot down Eynon’s aeroplane in flames, killing both Eynon and Robert. As with so many other men of the RFC shot down in flames, their bodies were never recovered, and both men are commemorated on the Arras Flying Services Memorial, France. Eynon was 23 years old, and Robert was 25. Earlier that year, on 26 March 1916, Eynon’s father had passed away at the family’s home at Hambrook, near Bath, after being discharged from the Army, where he had served as a Lieutenant with the Army Service Corps Remounts Section, due to ill health, but is not commemorated on the Nevern War Memorial. 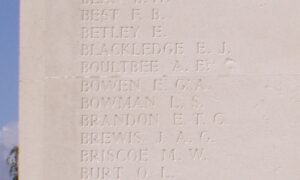 Richard Thomas Cole, Private, 17635, Essex Regiment. Richard was born at Chelmsford in 1891, the son of Richard Thomas Cole and Jane Louise Cole (nee Bradley). He was working at Nevern prior to the war as a horseman for the Davies family at Rhydymaen Velindre, and married Mary Elizabeth Jenkins in 1913, the couple setting up home at 4, Goat Street, Newport, Pembrokeshire. RIchard enlisted at Clydach Vale into the army, and was posted to the 1st Battalion, Essex Regiment, which was attached to 88 Brigade, 29th Division. On 21 March 1915 the battalion sailed from Avonmouth for Gallipoli, via Egypt and Mudros, and landed at Cape Helles on 25 April 1915. From here on the 29th Division was to gain a tremendous reputation, taking part in a terrible campaign. Richard was wounded at Gallipoli in November, and died of his wounds on 22 November 1915, aged 23. He is buried at Hill 10 Cemetery, Gallipoli. 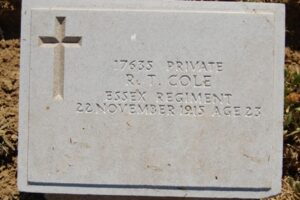 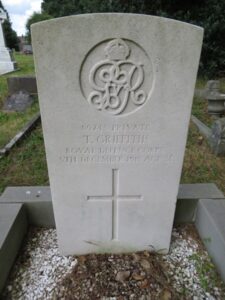 Harry Llewellyn Hughes-Jones, Lieutenant, Middlesex Regiment. Harry was the son of the late Reverend I. Hughes-Jones, Vicar of Nevern, and Mrs Lily Hughes-Jones, of 52, Minster Road, West Hampstead. He had been commissioned into the Middlesex Regiment, serving with their 11th Battalion, attached to 36 Brigade in 12th (Eastern) Division. The Division landed at Boulogne on 31 May 1915, and took over the line at Ploegsteert Wood. They then moved south and fought in the Battle of Loos, and the subsequent actions of the Hohenzollern Redoubt, and it was at Loos that Harry was killed on 3 March 1916. He was 26 years old, and is commemorated on the Loos Memorial, France. Harry is not commemorated locally. 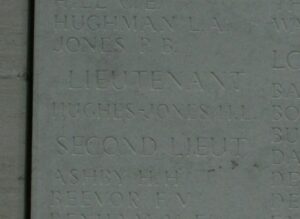 James Jones, Private, 204719, Royal Welsh Fusiliers. James was born at Nevern in 1892, the son of Thomas and Mary Jones. The family later resided at Penveidir Isaf, Pontfaen, Fishguard. He enlisted at Carmarthen into the Welsh Regiment, but later transferred into the 17th Battalion, Royal Welsh Fusiliers, which was attached to 115 Brigade, 38th (Welsh) Division. The Division had been in France since December 1915, and in July 1916 had famously captured Mametz Wood. After suffering heavy casualties at Mametz, the Division moved via Hebuterne to Boesinghe, north of Ypres, where they remained until taking part in the Battles of Pilckem Ridge and Langemarck in July and August 1917. The Division was then posted to a quieter sector around Armentieres, where it wintered, and it was here that James was mortally wounded. He Died of Wounds on 3 March 1918, aged 25, and is buried at Merville Communal Cemetery Extension, France. His brother Walter also fell, but neither are commemorated at Nevern. 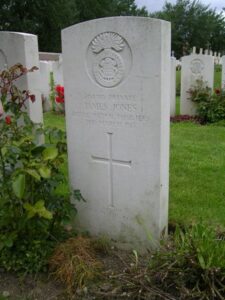 Walter Jones, Private, 33961, Welsh Regiment. Walter was born at Nevern in 1898, the son of Thomas and Mary Jones. The family had moved to Penveidir Isaf, Pontfaen, Fishguard before the war, and Walter enlisted there into the 13th Battalion, Welsh Regiment. The battalion was attached to 114 Brigade, 38th (Welsh) Division, and had been in France since December 1915, and had fought in Flanders, at Mametz Wood on the Somme, and at Pilckem Ridge during the Battle of Passchendaele. In April 1915 the division had been moved to positions north of Albert on the Somme, and remained there until the launching of the great offensive of August 1918. Walter was wounded at Aveluy Wood just before the opening of the Battle of Albert. He died of wounds on 23 August 1918, aged 20, and is buried at Varennes Military Cemetery, France. His brother James Jones also fell. Neither of the brothers are commemorated at Nevern. 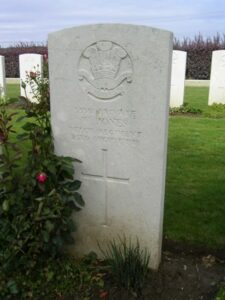 Walter Charles Little, Private, 320352, Welsh Regiment. Walter was the son of Walter and Mary Ann Little. His father died in 1900, and his mother remarried, moving to 3, Badeley Square, New Street, Chelmsford. Walter worked as a farm servant at Glandwr, Nevern prior to the war, and enlisted at Carmarthen into the Pembroke Yeomanry, with the Service Number 4688. The Pembroke Yeomanry formed at Tenby during August, 1914 as part of the South Wales Mounted Brigade, 1st Mounted Division. In 1916 they were sent to Egypt and guarded the Suez Canal Defences, but early in 1917 was disbanded, with the Battalion merging with the Glamorgan Yeomanry to form the 24th Battalion, Welsh Regiment, attached to 231 Brigade, 74th (Yeomanry) Division. The Division had formed in Egypt in January 1917 and had fought through the Palestinian Campaign, at the Battles of Gaza and the Battle and capture of Jerusalem. Due to the terrible casualties suffered by the British on the Western Front in March and April 1918 the Division was recalled to the Western Front, and arrived at Marseilles during May 1918. It fought at the Second Battle of Bapaume during the great offensive, and fought in Flanders before returning to the Somme and fighting at the Battle of Epehy, as part of the offensive towards the Hindenburg Line. Walter was wounded here, and evacuated to the Casualty Clearing Station at Doingt, where he sadly died of his wounds on 21 September 1918. He is buried at Doingt Communal Cemetery Extension, France. 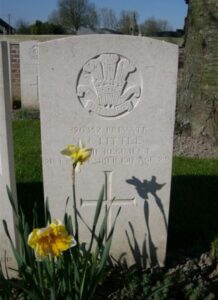 John Llewellyn Marsden. John was born at Llangennech in 1879, the son of James and Martha Marsden. By 1901 the family had moved to Ffynonddofn, Nevern, Martha’s family home. John served with the Mercantile Marine, as Third Engineer aboard the S.S. Romford. He had been visiting his cousin, Martha Jones, at 28, Beauchamp Street, Cardiff on 4 December 1917, while his ship was anchored in Barry Docks. He went missing that night, and his body was found floating near his ship the following morning. A subsequent inquest failed to discover how he had got into the water, but another sailor had heard someone crying out in distress that night, but with just his oil lamp to search, could see nothing. John was 38 years old when he died that night, and was buried at Nevern on 22 December 1917. He is not commemorated by the CWGC.

Henry Martin, Private, 94265, Royal Welsh Fusiliers. Henry was born at Hastings. He had lived at Nevern prior to the war, and enlisted at Carmarthen into the Monmouthshire Regiment, with the service number 60770. Henry was then transferred into the 17th Battalion, Royal Welsh Fusiliers, which was part of 115 Brigade, 38th (Welsh) Division. The division had been in France since December 1915, and had fought in Flanders, at Mametz Wood on the Somme, and at Pilckem Ridge during the Battle of Passchendaele. From 24 August 1918 onwards they advanced from positions on the Somme towards and through the Hindenburg Line, towards the Foret de Mormal, which is where Henry was killed on 4 November 1918, during the fighting for the forest. He is buried at Englefontaine British Cemetery, France. Henry is not commemorated locally. 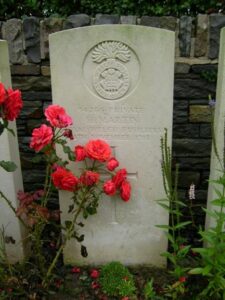 Harold Riddle, Private, G/4557, Royal Sussex Regiment. Harold was born at Hastings in 1894, the son of Albert Riddle. He resided at Nevern prior to the war, working as a cowman at Rhydymaen Velindre for James and Mary Davies. Harold enlisted at Cardigan into the Royal Fusiliers on 10 November 1914. On 31 August 1915 Harold was posted to France, becoming attached to the 9th Battalion, Royal Sussex Regiment, which was part of 73 Brigade in 24th Division. The Division had moved to France during August 1915 and marched to positions near Loos, where they took up reserve positions for the main Battle of Loos. They were sent into battle on the 25 September 1915 at Loos and suffered terrible casualties due to not being properly trained for battle, and were pulled from the line until the following year. Harold was reported as wounded and missing at sometime between 25 September 1915 and 28 September 1915, aged 21. His grave was never identified, and so he is commemorated on the Loos Memorial, France. 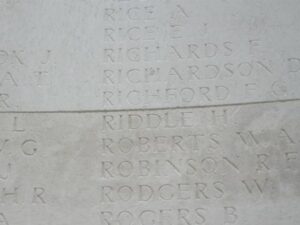 The War Memorial is also engraved with the names of the men of Nevern Parish who served and survived the Great War, with any extra information which can be traced. These men were: