Pembrokeshire Constabulary was the original police force in the county, up until the creation of the Dyfed-Powys Police Force in 1968. Situated within its former headquarters at Haverfordwest are two memorial plaques which commemorate the former Pembrokeshire policemen who fell during both of the world wars, three in WW1 and one in WW2. Another Pembrokeshire Policemen also fell during the Great War, but for some reason is not named on the memorial, so all of these men have been shown below. The photograph of the memorial has been kindly supplied by Kevin Smith, whose passion for the fallen members of Dyfed Powys Police has led to the unveiling of a new war memorial at the Dyfed Powys Police HQ, at Llangunnor, Carmarthen. 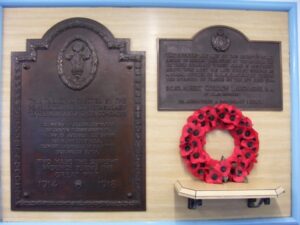 George William Henry Bodman, Private, 2060, Welsh Guards. George was born in Narberth, but resided in Velfrey Road, Whitland prior to the war. George enlisted at Cardiff into the newly formed Welsh Guards. The Welsh Guards were raised after the Royal Warrant of 26 February 1915. After being formed, they became part of the 3rd Guards Brigade, Guards Division, which was formed in France in August 1915. Their first taste of battle was at Loos, before being brought south to the Somme in 1916. During the Somme Offensive the Division fought at the Battle of Flers-Courcelette, and this is where George was Killed in Action on 16 September 1916. George’s body was lost on the battlefield and never recovered, and so he is remembered on the Thiepval Memorial. 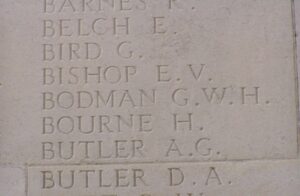 Thomas Henry Coffey, Private, 31843, South Wales Borderers. Thomas was born in Bedwas in 1886, the son of George John Coffey and Mary Coffey (nee Morgans). Thomas had married Ethel Annie Fairfax in 1905. He had returned to his mothers native Pembrokeshire to serve as a Police Constable, first at Pembroke, and then at Tenby, taking his wife and five children. Thomas enlisted at Aldershot into the Military Foot Police, and later transferred into the 8th Battalion, South Wales Borderers, which was attached to 67 Brigade, 22nd Division. The Division landed at Boulogne on 6 September 1915, but were almost immediately ordered to proceed to Marseilles, embarking there on 30 October for Salonika. They remained here for the duration of the war, fighting in a disease ridden climate. Thomas died of dysentery at the 42nd General Hospital, Salonika on 6 September 1918, aged 32. He is buried at Salonika (Lembet Road) Military Cemetery, Greece. 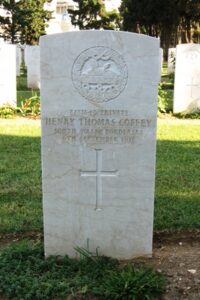 Arthur Edwards, MM, Bombardier, 64876, Royal Field Artillery. Arthur was born at Dale in 1893, the son of John and Catherine Edwards, of Hayguard Bay. Arthur served with Pembrokeshire Constabulary prior to enlisting at Cardiff into the Royal Field Artillery on 21 April 1911. At the outbreak of war was posted to France with the 112th Battery, 24th Brigade Royal Field Artillery, which was attached to the 6th Division. On 10 September 1914 the Division landed at St Nazaire and moved to reinforce the hard-pressed BEF on the Aisne, before the whole army was moved north into Flanders. Here the Division took part in the Action of Hooge during June 1915, and in 1916 moved to the Somme, where it fought at the Battle of Flers-Courcelette, the Battle of Morval and the Battle of Le Transloy. The following year saw it at Arras, where it fought at the Battle of Hill 70. Arthur came home on leave in the summer of 1917, and married Annie May Griffiths at Pembroke on 23 July 1917. He rejoined his unit in time to take part in the Battle of Cambrai later in the year. In the spring of 1918 the Division was one of those hit by the German Offensive on the Somme, which had been launched on 21 March 1918, and the Division took part in the Battle of St Quentin. Arthur was killed during the next few days terrible fighting around Achiet-le-Grand on 25 March 1918, aged 24. He has no known grave, and is commemorated on the Arras Memorial, France. Arthur had won the Military Medal for Bravery in the Field during his time on the Western Front, and the award was published in the London Gazette of 6 August 1918. 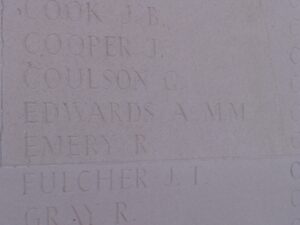 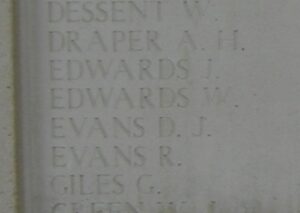 Albert Gordon Laugharne, B.A., Sub-Lieutenant, Royal Naval Volunteer Reserve. Albert was the Son of Albert and Rose Laughame, and the husband of Rosamond Mair Laughame, of Ammanford. He served in the RNVR aboard H.M.S. Blackwood, which was an American Lend-Lease Destroyer that had been taken over by the Royal Navy on 27 March 1943. After over a year spent carring out escort duties with the Atlantic Convoys Blackwood was torpedoed by U-764 off Portland Bill on 15 June 1944, and sank the next day under tow. Albert was killed in the initial torpedo strike and was 27 year old. He is remembered on the Plymouth Naval Memorial. 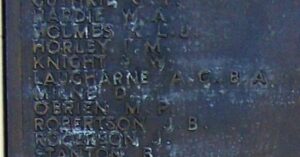 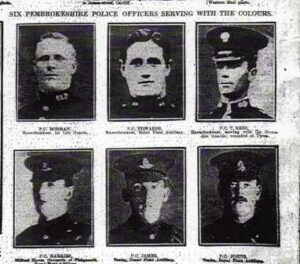 Below is a scan of a newspaper clipping, which depicts six Pembrokeshire Policemen who were serving with the forces. One of these men was killed, and is commemorated above.