Rhoscrowther is a small village located just over five miles west of Pembroke, near the south shore of Milford Haven. The ancient church is dedicated to Saint Decuman, but had been locked up since an explosion at the nearby Texaco Refinery in 2011 which damaged its roof structure and forced the evacuation of the few remaining dwellings in the village. Inside the Church is a single war memorial to Frederick Thomas, of the Parish, who fell during World War One. Also on this page are details of all of the known men from the Parish who fell during both World Wars but who are not commemorated here. 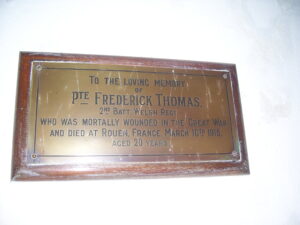 William James Evans, Gunner, 371314, Royal Garrison Artillery. William was born in Rhoscrowther in 1898, the son of David and Ellen Evans. The family later resided in 18, Nelson Street, Pennar Court, Pembroke, where William’s father worked in the Dockyard. William enlisted in Neyland into the Pembrokeshire Battery, Royal Garrison Artillery and was posted to France, joining the 185th Siege Battery, Royal Garrison Artillery, which was equipped with the 9.2” Howitzer. William was killed in action just over two weeks before the Armistice, on 24 October 1918, aged 20. He is buried in Wassigny Communal Cemetery, France. There are a number of gunners there who were killed on the same date, suggesting a disaster to a gun crew. 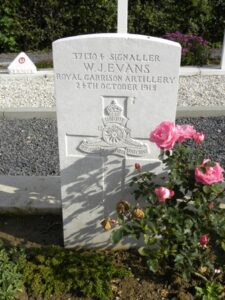 Edmond Talbot Stanley, Major, Devonshire Regiment. Edmond was born at Rhoscrowther in 1858, the third son of Edmond Stanley, J.P. and Anne Stanley. He was educated at Victoria College, Jersey and joined the army in 1875, gaining a commission into the 11th Foot (Devonshire Regiment) before sailing for India. In 1884, he married Alice Mary Crocker, and the couple had three daughters. Edmond held positions around the Empire over the coming years and served during the Boer War of 1899-1902. He retired soon afterwards but rejoined the army at the outbreak of the Great War and served for the duration. By the end of the war he was second in command of the 11th Battalion, Devonshire Regiment and died at Rouen on 27 February 1919, aged 60. He is buried in St. Sever Cemetery Extension, Rouen, France. 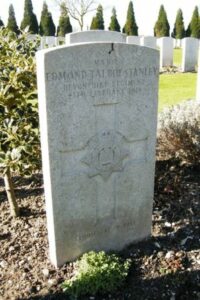 Frederick Thomas, Private, 27342, Welsh Regiment. Frederick was the son of James and Annie Thomas, of Upper Lodge, Castle Hall, Milford Haven. He enlisted at Pembroke into the Welsh Regiment, and was posted to France to join the 2nd Battalion, Welsh Regiment, attached to 3 Brigade, 1st Division. The Division had been one of the first in France, fighting at the Battle of Mons, and the retreat to the Marne, where the Germans were stopped. They then fought at the Aisne, before being moved north to Ypres. Here they fought at the First Battle of Ypres, where they again stopped the German Offensive, before wintering in Flanders. The following year saw them in action again at the Battle of Aubers, before moving South to Loos, where they fought during the Battle of Loos, and the action at the Hohenzollern redoubt. Frederick was wounded at Loos in March 1916, and sent to the Base Hospital at Rouen. He died there on 10 March 1916, aged 18, and is buried at St. Sever Cemetery, Rouen, France. 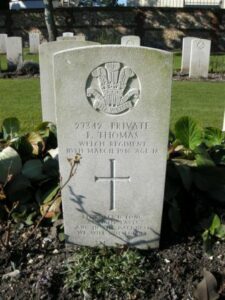 Albert John Price, Gunner, 1119610, Royal Artillery. Albert was the son of Joseph and Esther Price and the husband of Winifred Price, of Rhoscrowther. He served with the 130th Field Regiment, Royal Artillery, which was a Territorial unit, attached to the 36th Indian Division in India. Little is known of Albert but he died in Burma on 4 January 1943, aged 31, and is commemorated on the Rangoon Memorial. The photograph is courtesy of Tony Beck. 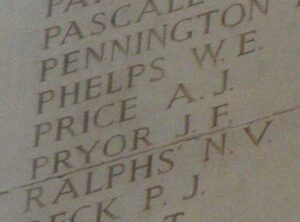