Llys-y-Fran is today better known for being the location of a large reservoir which supplies drinking water throughout much of Pembrokeshire. At the south eastern edge of the reservoir is the small village of Llys-y-Fran, which gives the water its name. There does not appear to be a war memorial in the village, or more accurately there is none inside St. Meilyr’s Church, so the details below are of men known to have been from the immediate area. If details of any more men come to light, they will be added below. 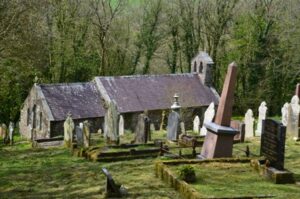 David Rees Evans, Private, 1968, Welsh Guards. David was the son of Benjamin Evans and Dinah Evans (nee Rees), of Post Office, New Moat. He had worked as a steelworker at Gowerton prior to the war, and enlisted at Swansea into the Welsh Guards. The regiment had been raised by Royal Warrant on 26 February 1915, and its 1st Battalion embarked for France on 17 August 1915, joining the 3rd Guards Brigade, Guards Division. The newly formed regiment saw its first major action during the Battle of Loos, and wintered at Ypres before moving to the Somme in the summer of 1916. The division saw heavy fighting on the Somme, taking part in the Battle of Flers-Courcelette and the Battle of Morval in September, and famously captured the village of Lesbouefs. David was wounded at Flers, and evacuated to a Casualty Clearing Station near Albert, where he died of his wounds on 17 September 1916, aged 28. David is buried in Grove Town Cemetery, Méaulte, France. 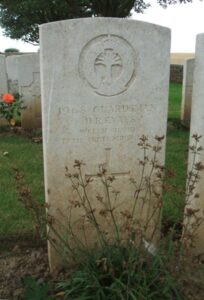 Frederick Lloyd Phillips, Private, 45045, Welsh Regiment. Frederick was born at New Moat, the son of Thomas and Margaret Phillips. His parents were from Llys-y-Fran, but later resided at Penbrist, Rosebush. Frederick enlisted at Carmarthen into the army, and was posted to join the 15th (Carmarthen) Battalion, Welsh Regiment, which was in France attached to 114 Brigade, 38th (Welsh) Division. The Division had fought at Mametz Wood and Passchendaele, capturing the Pilckem Ridge, and played a major part in the defence of the Somme Sector in 1918 at the time of the German Offensive. From 21 August 1918 onwards the 15th Welsh crossed the River Ancre, and began its part in the great offensive which was to win the war. It was during the Second Battle of Bapaume that Frederick was wounded. Frederick was evacuated to the base hospital at Rouen where he died of wounds on 5 September 1918, aged 29. He is buried in St. Sever Cemetery Extension, France. Frederick is commemorated at Clynderwen. 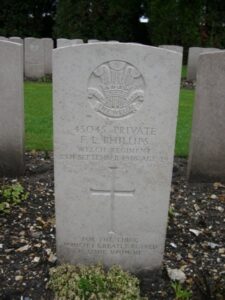 James Thomas, Private, 1913, Welsh Guards. James was born at Llys-y-Fran, the son of Morris and Martha Thomas. His parents later resided at Portis, Llangolman. James enlisted at Neath into the 1st Battalion, Welsh Guards, part of 3rd Guards Brigade, Guards Division. James survived the carnage of the Battle of Loos during September 1915, and was with the Division when they moved south to the Somme area. At the Somme, the Division fought in the Battle of Morval, and it was here that James was killed in action on 25 September 1915, aged 32. He is remembered on the Thiepval Memorial, France. As far as is known, James is not commemorated anywhere locally. 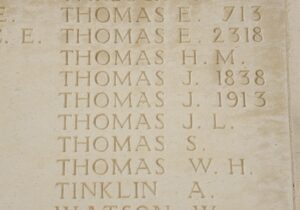 Philipp Harries Lewis, Junior Engineering Officer, Merchant Navy. Philipp was the son of John Harries Lewis, and of Letitia Ann Lewis, of Llys-y-Fran. He lived at Robeston Wathen prior to the war and served with the Merchant Navy aboard the SS Casanare (Liverpool). On 3 November 1940, Casanare was torpedoed by the German submarine U-99. The stricken ship triggered off a chain of events which led to the U99 torpedoing two other ships which came to her rescue, HMS Laurentic, and HMS Patroclus. Laurentic was the next ship to be torpedoed, and while attempting to rescue the survivors of the Casanare, Patroclus was torpedoed and sank. Philipp was among the many men killed that day. He was 22 years old, and is commemorated on the Tower Hill Memorial, London. Philipp is commemorated on the Robeston Wathen Memorial. 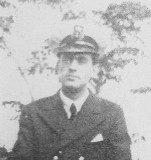 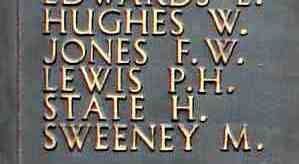 According to the 1918 Absent Voters List, there were also several other local men who were serving, all of whom survived the war:

William Lewis Bowen, Corporal, 320012, Welsh Regiment. William was the son of William Lewis Bowen and Jane Bowen, of Llys-y-Fran. He worked on his father’s farm prior to the war, and enlisted into the Pembroke Yeomanry. William embarked for Egypt with the Yeomanry in 1916, and was still with the regiment when it merged with the Glamorgan Yeomanry to form the 24th Battalion, Welsh Regiment in January 1917. William survived the war, returning to West Wales, and probably died in 1961, aged 74.

John Evans, Driver, 169950, Army Service Corps. John was the son of Edward and Rebecca Evans, of Gwastad, Llys-y-Fran. His parents had moved to Fishguard by 1911, but John and his brother Thomas remained in Llys-y-Fran, residing at Pantyreglwys. He served as a Driver with the Motor Transport, Army Service Corps in France.

Thomas Evans, Stoker, Royal Navy. Thomas was the son of Edward and Rebecca Evans, of Gwastad, Llys-y-Fran. His parents had moved to Fishguard by 1911, but Thomas and his brother John remained in Llys-y-Fran, residing at Pantyreglwys. He served as a Stoker with the Royal Navy, at HMS Pembroke II.

Griffith Howell Jones, Private, 266508, Welsh Regiment. Griffith was the son of John and Eleanor Jones, of Southfield Villa, Llys-y-Fran. He was an apprentice Carpenter before enlisting into the 4th Battalion, Welsh Regiment at Haverfordwest on 12 May 1915. He served in Palestine with the 4th Welsh, which was attached to 158 Brigade, 53rd (Welsh) Division, until contracting dysentery, and was hospitalised in August 1917. After he had recovered, Griffith was transferred to the 1/7th Battalion, Royal Welsh Fusiliers. He survived the war, and died in Carmarthen in 1968, aged 70.

John Harries Lewis, Engineer, Mercantile Marine. John was the son of Peter and Mary Lewis, of Fishguard. He lived at Velindre, Llys-y-Fran, with his wife Anne, and served as an engineer with the Mercantile Marine throughout the war. John survived the war and died on 14 March 1942, aged 55. His son, Philipp Harries Lewis, was killed in World War Two.

J. Smith, Royal Field Artillery. This man was mentioned in a contemporary newspaper report as having enlisted, but cannot presently be further identified.

Hugh Harries Thomas, Private, 86156, Machine Gun Corps. Hugh was the son of John and Ann Thomas, of Velindre Farm, Penbrist. He enlisted at Haverfordwest on 19 February 1916 into the 4th Battalion, Welsh Regiment. Hugh transferred to the Machine Gun Corps on 13 February 1917, and was posted to their 62nd Battalion. He survived the war, and died in 1973, aged 78.