Croesgoch (Croes-goch) is a village in North Pembrokeshire, situated around five miles north east of St Davids on the junction of the A487 St Davids to Fishguard road with the B4330 Llanrhian to Haverfordwest. The members of Croesgoch Chapel who fell during the Great War are commemorated on a fine War Memorial which stands in the grounds of Croesgoch Baptist Cemetery, and takes the form of a granite column surmounted by the figure of a grieving woman. It was unveiled in May 1921. An extra panel was engraved following World War Two, to include the name of another member of the Chapel who fell during that later conflict. 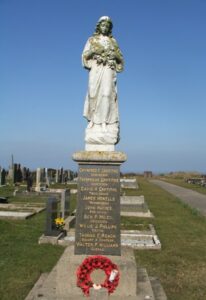 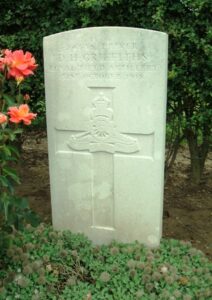 Gwynfred Ellis Griffiths, Private, 43837, Wiltshire Regiment. Gwynfred was the son of Joseph and Anne Griffiths (nee Morris), of The Post Office, Croesgoch, Letterston. Prior to the war, he lived with his wife, Alicia Griffiths, at Wedgwood House, Llandeilo. He enlisted at Ammanford into the army, and was posted to France, where he joined the 1st Battalion, Wiltshire Regiment, which had been there since the outbreak of war, attached to 7 Brigade, 3rd Division. Gwynfred probably joined the battalion in 1916, on the Somme. They fought throughout the Battle of the Somme, and at the end of October 1916 moved to Ploegsteert. In 1917 the Division fought through Third Ypres, at Messines and Pilckem, and then moved to Givenchy then Bullecourt. They were in positions north west of Bapaume when the German Spring Offensive hit on 21 March 1918. After suffering heavy casualties, they moved to Flanders at the end of March, but were again hit by the German Offensive in Flanders. The Division suffered terrible casualties, and moved to the Aisne to rebuild. Again, they were hit by a German Offensive on the Chemin des Dames at the end of May, and again they held firm. On 21 June 1918 the Battalion transferred to 110 Brigade, 21st Division, and they fought with the Division during the drive through the Hindenburg Line. Gwynfred was killed in action on 8 October 1918, aged 39. He is buried at Bois-Des-Angles British Cemetery, Crevecouer-Sur-L’Escaut, France. His brother Theophilus also fell. 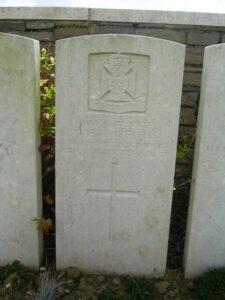 Theophilus Griffiths, Second Engineer, Mercantile Marine. Theophilus was the son of Joseph and Anne Griffiths (nee Morris), of the Post Office, Croesgoch, Letterston. He served as an engineer aboard the S.S. Bedale, a West Hartlepool registered cargo steamer. On 6 October 1917, Bedale was en-route from Cardiff to Berehaven, carrying a cargo of coal, when she was torpedoed by the German submarine U-96, and sank with the loss of three lives. Theophilus was 29 years old when he died that day, and is commemorated on the Tower Hill Memorial, London. His brother Gwynfred also fell.

James Howells, Private, 38169, Welsh Regiment. James was the son of Hugh and Elizabeth Howells, of Waunbeddau, St. Davids. He enlisted into the Welsh Regiment on 1 June 1915 and was posted to the 9th Battalion, Welsh Regiment, which was attached to 58 Brigade, 19th (Western) Division. The division moved to France in July 1915 and James took part in its costly assault during the Battle of Loos on 25 September. By January 1916 trench life had taken its toll on his health and James was hospitalised at Rouen. He was diagnosed as having contracted tuberculosis and returned to England, dying on 11 May 1916 aged twenty. James is possibly buried in Croesgoch. His case was forwarded to the CWGC by myself on 8 July 2015 and James was accepted for commemoration on Tuesday 27 October 2015. He is presently commemorated on panel 9 of the Brookwood Memorial, Surrey. 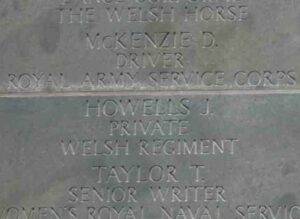 William Howells, Private, 29202, South Wales Borderers. Willie was the son of Benjamin and Mary Howells, of Waunbeddau. Willie enlisted on 8 December 1915 into the South Wales Borderers, but was placed on the reserve until being mobilised in January 1917. He was a ploughman, and was transferred to the 421st Agricultural Company, Labour Corps, at Warrington, before being posted to the 533rd Agricultural Company at Carmarthen. Willie never served overseas, and died of pneumonia at Waunbeddau on 26 November 1918, aged 23. He is buried at St. David’s (Berea) Congregational Chapelyard. His brother in law, John Hughes, also fell. 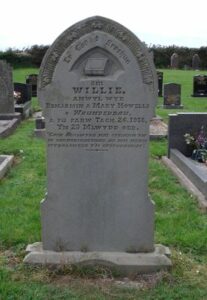 John Hughes, Private, 54156, Welsh Regiment. John was the son of John and Ann Hughes, of Porthgain. His father John was a slate worker who had moved to Pembrokeshire from North Wales and met and married their mother Ann locally. John worked as a haulier and had married Miriam Howells prior to enlisting at Swansea, into the 6th Battalion, Welsh Regiment and was posted to France in October 1916, joining the 13th Battalion, Welsh Regiment, which was attached to 114 Brigade, 38th (Welsh) Division. The Division had landed in France during December 1915 and moved to positions in the ‘Nursery Sector’ near Fleurbaix. In June they marched south, and took up positions on the Somme, where they were tasked with the capture of Mametz Wood. The first attack went in on 7 July 1916, and it was several days later that the wood finally fell to the Welsh, after they had suffered terrible casualties. The British High Command was unhappy at the time taken by the Division to capture the Wood, and so they were removed from the line and sent to hold the Canal Bank sector, north of Ypres, which is where John joined his battalion. By the beginning of December, the 13th Welsh was in the line in the Hill Top sector, repairing the trenches and carrying out nightly patrols. John was killed on 4 December 1916, when the Germans bombarded the line held by the 13th Welsh, in retaliation for a raid the previous night. The 25-year-old is buried in Essex Farm Cemetery, Belgium. His brother in law, William Howells, also fell. 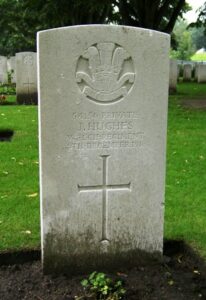 Benjamin Phillips Miles, Private, 52949, Welsh Regiment. Ben was the son of Thomas and Mary Ann Miles, of Croesgoch, Letterston. Prior to the war had been employed as a Teamster at Treglemais, and he enlisted at Carmarthen into the army. Ben was posted to France in the summer of 1916, where he joined the 14th Battalion, Welsh Regiment. The battalion was attached to 114 Brigade, 38th (Welsh) Division, and had taken part in the capture of Mametz Wood in July 1916, before being moved to Boesinghe, north of Ypres. The Division held the line here until launching an attack on Pilckem Ridge on 31 July 1917, and remained in the area during the resulting Battle of Langemarck. Ben was killed while acting as a stretcher-bearer at Langemarck on 23 August 1917. He was 28 years old, and is commemorated on the Tyne Cot Memorial, Belgium. 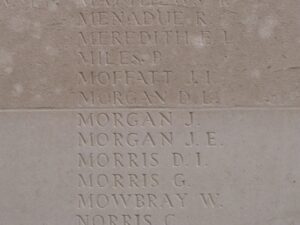 William James Phillips, Private, 201432, Welsh Regiment. William was the son of John and Mary Phillips, of Barry Terrace, Trefin. He enlisted at Mathry into the 1/4th Battalion, Welsh Regiment, which was the local Territorial Battalion, attached to 159 Brigade, 53rd (Welsh) Division. The Division landed at Cape Helles, Gallipoli, on 9 August 1915, and was immediately thrown into action, spending the next few days in isolated pockets, fighting against a Turkish counter-attack during the Battle of Sari Bair, and then at the Attack on Scimitar Hill. The Division remained here throughout the coming months, and suffered severe losses in manpower strength during the great November 1915 blizzard on Gallipoli, when its total strength was reduced to less than that of a full-strength Brigade. On 11 December 1915 the Division was evacuated to Mudros, and by 23 December 1915 were moved to Egypt. They remained on the Suez Canal Defences for the next twelve months, where it took part in operations against the Sultan of Darfur, and in March 1917 took part in the advance into Palestine. William must have been attached to the 8th Welsh, as he died in Mesopotamia on 10 October 1917, aged 20. He is buried at Baghdad (North Gate) War Cemetery, Iraq.

Thomas Evan Roach, Private, 94283, Royal Welsh Fusiliers. Thomas was born in 1898, the son of James and Emily Roach, of Square and Compass, Trevine. He enlisted at Carmarthen on 27 May 1918 into the Monmouth Regiment, and landed in France on 11 October 1918. Thomas was posted into the 17th Battalion, Royal Welsh Fusiliers, which was attached to 115 Brigade, 38th (Welsh) Division. The Division arrived in France during December, 1915 and fought at Armentieres before moving to the Somme, where they were decimated at Mametz Wood. After nearly a year rebuilding, they fought well at Passchendaele, and also played an important role in the battles of 1918, first during the desperate months of Spring 1918, trying to hold the aggressive German advance, and then later on in the great advance to the Hindenburg Line. Thomas was killed in action during the Battle of the Selle on 29 October 1918, aged 20. He is buried at Englefontaine British Cemetery, France. 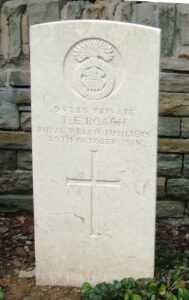 Walter Price Williams, Private, 201599, Welsh Regiment. Walter was born on 25 April 1895, the son of Owen and Mary Williams, of 4, Caerau, Llanrhian. He enlisted at St. David’s into the Welsh Regiment. Walter was probably posted to France early in 1917, and joined the 14th Battalion, Welsh Regiment, which was attached to 114 Brigade, 38th (Welsh) Division. The battalion was at Ypres, positioned at Boesinghe, along the Yser Canal. On 31 July 1917 the division made its famous successful assault on Pilckem Ridge, moving the front line forwards to the Steenbeek. Walter was killed in action at Langemarck on 5 August 1917, aged 23. He is buried in Welsh Cemetery (Caesar’s Nose), Belgium. 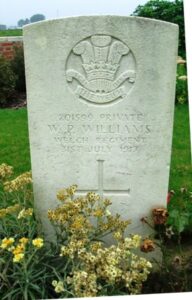 Aerwyn Thomas Rees, Driver, 225227, Royal Army Service Corps. Aerwyn was the son of William Thomas Rees and Margaret Rees, of Mesur-y-Dorth, Croesgoch. He served with the Royal Army Service Corps, and was based at Singapore prior to 1941. When the Japanese captured Singapore in December 1941, Aerwyn was taken prisoner, and was sent to Thailand with ‘H’ Force in May 1943. He suffered in captivity, and died at Malay Hamlet Camp, Kannyu of cholera on 27 June 1943, aged 29. Aerwyn’s remains were first buried in Kannyu Jungle Cemetery, but his grave was later moved to Kanchanaburi War Cemetery, Thailand. 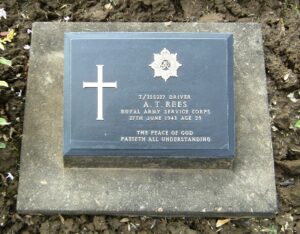