R.A.F. Dale was built between the villages of Dale and Marloes in 1941. It became operational in June 1942, initially it was to be named RAF Marloes. It was planned as a satellite to nearby RAF Talbenny, and was used by 304 Squadron from June 1942 until April 1943 flying the Wellington IC. Following the war, RAF Dale was decommissioned and the site became occupied by the Fleet Air Arm as R.N.A.S. Dale (aka H.M.S. Goldcrest).

Inside the Church of St. Peter’s, in nearby Marloes, is a framed war memorial scroll, which commemorates the members of 304 (Polish) Squadron, RAF, who died whilst based at Dale. 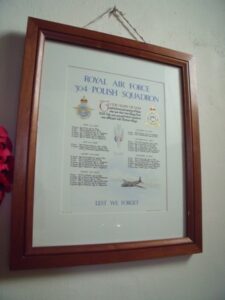 304 Squadron was formed at RAF Bramcote on 23 August 1940, then from 1 December 1940 it operated from RAF Syerston, as a part of No. 1 Bomber Group. On 24 April 1941 it was declared as operational, armed with Vickers Wellington Mk I medium bombers. On the night of 24/25 April 1941 two crews flew the squadron’s first combat mission against fuel tanks in Rotterdam.

The squadron conducted night bombing operations until April 1942 when, following heavy losses, it was transferred to RAF Coastal Command.

The squadron was initially based at RAF Tiree with its Wellingtons until moving to RAF Dale on 13 June 1942, under the command of Mjr nawigator Stanisław Poziomek, and began patrols over the Bay of Biscay. Seven crews took part in a thousand-aircraft raid at Bremen on 25/26 June 1942, losing one aircraft.

The squadron took part in many attacks on German U-Boats and on 13 August 1942 was credited with its first U-boat sinking. A number of gallant missions were carried out by 304 Squadron from RAF Dale, until it was transferred to RAF Docking on 30 March 1943, where the Squadron maintained its fine record.

The war memorial to the Polish men of 304 Squadron at Marloes commemorates 35 men killed during its time there: