The Parish Church at Manorbier contains a number of war memorials; to individuals such as Henry Ferguson Day Barclay; Captain D. A. N. Lomax; the Parishioners who served; and the Parishioners who fell. As well as the Parish War Memorial, there are fine leaded glass war memorial windows for those who served and those who fell, plus a simple brass memorial plaque to the men lost in the sinking of the Trident-class collier SS Satrap.

The crew of the Satrap are not commemorated as war casualties by the Commonwealth War Graves Commission as their ship foundered in heavy seas, and there is no evidence of it sinking due to enemy activity, however there was deep suspicion at the time that a German U-Boat caused the disaster, although several vessels were wrecked around the south-west coast of Wales due to heavy gales during the period, including a large Spanish vessel, an Admiralty Drifter and the Mumbles lifeboat.

This page of the website commemorates the lives of the 21 men lost as a result of the sinking of the SS Satrap off Manorbier on 31 December 1915. 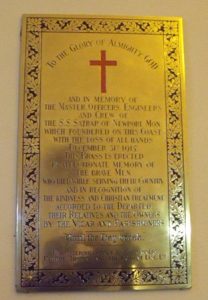 TO THE GLORY OF ALMIGHTY GOD AND IN MEMORY OF/ THE MASTER, OFFICERS, ENGINEERS/ AND CREW OF/ THE SS SATRAP OF NEWPORT MON./ WHICH FOUNDERED ON THIS COAST WITH LOSS OF ALL HANDS/ DECEMBER 31ST 1915/ THIS BRASS IS ERECTED/ IN AFFECTIONATE MEMORY/ OF THE BRAVE MEN/ WHO DIED WHILE SERVING THEIR COUNTRY/ AND IN RECOGNITION OF/ THE KINDNESS AND CHRISTIAN TREATMENT/ ACCORDED TO THE DEPARTED/ THEIR RELATIVES AND THE OWNERS/ BY THE VICAR AND PARISHIONERS/ “UNTIL THE BREAK OF DAY”/ THIS OFFERING IS MADE BY THE OWNERS/ PARDOE THOMAS AND THE TRIDENT LINE LTD

The Trident Line Collier, SS Satrap, was registered in Newport and was under the command of the vastly experienced Captain John Gray Chalmers, of Greenock. She had been requisitioned by the Admiralty.

On New Years Eve, Friday 31 December 1915, Satrap left Barry with a cargo of steam coal, bound for an unnamed Royal Naval base and reportedly carrying sealed government orders. The departure of the ship had been delayed for several days due to reported enemy submarine activity in the Bristol Channel and should have left Barry on Christmas Eve. The weather was exceptionally bad, with a gale force wind blowing and the ship steamed off into heavy seas. Entering the Irish Sea, Satrap was off the coast at Manorbier when it sank later that day, with the loss of all her crew of 21 men.

Over the coming days, realisation grew that Satrap was missing: The body of a man apparently 40 to 50 years of age washed ashore at Newgale on Sunday 2 January, 5 ft. 9 in. in height, with grey hair. There was a tatoo mark on the left forearm of a female figure holding up a flag. The index finger of the right hand was damaged, the top being missing. The body, which was naked, was almost headless. On the following day the body of a second man was recovered at Newgale, estimated at 20 years of age, naked and headless, 5ft. 1in in height.

That same afternoon another body washed ashore at Druidstone Sands, of a man between 30 and 36 years of age, 5ft. 6in. in height and of dark complexion, dark hair and moustache, round face. a tooth missing from the front upper jaw. It wore a pink under-vest, dungaree trousers, brown woollen socks, and had on a lifebelt, but there was no name, or marks, on the belt.

Two bodies were washed ashore at Swanlake Bay, Manorbier, on Tuesday 4 January. The bodies were identified as those of Chief Officer Harry Row and of Third Engineer Herbert May. Later that day a lifebelt was found in the bay marked ‘S.S. Satrap’. Another lifebelt was found which had been cut in half, creating further suspicion that the ship had been lost due to enemy action.

A few days later another body, of a man about 45 years of age, of dark complexion, black hair, dark whiskers, rather heavy build, height 5ft. 6in., with good teeth was recovered at Druidstone. He wore no clothing of any kind, but there was a leather belt with all iron buckle, round the waist.

A day later, washed ashore, at Manorbier, was the body of a man apparently of the age of 27, clean shaved, good teeth, heavy build, 5ft. 6in, whilst another body was recovered from Linney Head, Castlemartin just afterwards, in an advanced state of decomposition.

These are instances of just some of the bodies recovered from the sea in the locality over the coming weeks and they are probably buried in the local Parish Churches where they were recovered, as there were several meetings held by the Pembroke Board of Guardians in the coming weeks, where questions were asked of who should bear the expense of burying these poor souls.

The Crew of the SS Satrap

Chalmers, John Gray, Master, Mercantile Marine, S.S. Satrap (Newport). John, the Master of the Satrap, was the husband of Elizabeth Holmes Chalmers, of 10, Ardgowan Street, Greenock. He was 51 years old. John is commemorated on a grave in Greenock Cemetery, Scotland.

May, Herbert, Third Engineer, Mercantile Marine, S.S. Satrap (Newport). Herbert was born in Haslingden on 4 June 1893, the son of William Francis May and Susannah May (nee Pyle). His father was a mariner, and when Herbert was young the family had moved to 151, Gladstone Road, Barry Docks. Herbert was 22 years old. His brother, William James May, was killed on the Somme in the summer of 1916.