West Wales has a long and distinguished military history, with the Royal Dockyard at Pembroke, and the Army bases at Pendine, Penally and Castlemartin, for example, but the newest of the Armed Forces is the Royal Air Force, and during the 20th Century, twelve R.A.F. or R.N.A.S. bases were created throughout West Wales. There are a substantial number of aircrew buried throughout West Wales, most notably at Brawdy, Carew Cheriton, Dale, Haverfordwest, Pembrey and at Pembroke Dock Military Cemetery, while there are memorials to RAF Coastal Command in Robeston Wathen Church, plus several other memorials scattered around the area to commemorate aircraft crashes. 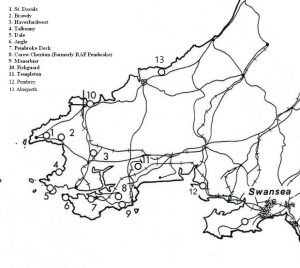 R.A.F. Brawdy was first occupied by 595 Squadron, who arrived on 1 December 1943, flying first the Henly III, then the Hurricane IIC, Martinet, Oxford, Hurricane IV, Vengeance IV, Spitfire VB, Spitfire XII, Spitfire IX, and finally the Spitfire XVI. They were joined at Brawdy on 1 February by 517 Squadron, flying the Halifax V.

R.A.F. Talbenny was opened in 1942, becoming the home to No 4 Armament Practice Camp from December 1942 until September, 1945. The base was occupied by 311 Squadron, flying the Wellington IC from June 1942 until May 1943. 248 Squadron also arrived here in September, 1942 equipped with the Beaufighter VIC, leaving just two months later. 304 Squadron flew the Wellington IC here for several weeks at the end of 1942, when 248 Squadron took over from them, flying the Beaufighter VIC from here for a month. No 303 Ferry Training Unit joined them in March 1943, also leaving during September, 1945, and Talbenny also became home to No 11 Ferry Unit from September 1944 until August 1945.  Talbenny came under No. 44 Group in 1944, and finally closed in 1946.

R.A.F. Dale was built between the villages of Dale and Marloes in 1941. It became operational in June 1942, initially it was to be named RAF Marloes. It was planned as a satellite to nearby RAF Talbenny, and was used by 304 Squadron from June 1942 until April 1943 flying the Wellington IC. Following the war, RAF Dale was decommissioned and the site became occupied by the Fleet Air Arm as R.N.A.S. Dale (aka H.M.S. Goldcrest).

R.A.F. Angle was opened in December 1941 as an R.A.F. Station, and was first used by 32 Squadron flying the Hurricane I. In November 1941 they were replaced by 615 Squadron, equipped with the Hurricane IIC. Several Squadrons followed in turn. 312 Squadron flew the Spitfire VB, 263 Squadron with the Whirlwind, then 152, 421 and 412 Squadrons occupied the base, flying the Spitfire VB. During September 1943 the R.A.F. swapped to the R.N.A.S. Station at Dale, with the R.N.A.S. taking their place at Angle. The base closed in early 1945.

R.A.F. Pembroke Dock was initially formed in 1931 when No. 210 Squadron RAF arrived, equipped with Southampton II’s flying boats. For almost 30 years the RAF were based at Pembroke Dock. The Squadron played host to a massive array of Squadrons during between 1931 to 1957, with 95, 119, 201, 203, 204, 209, 210, 228, 230, 240, 320, 321, 422 and 461 Squadrons being based here at some time, flying a range of aeroplanes of various marks, from the Catalina, Lerwick, Fokker T VIIIw/G, Anson, Scapa, London, Singapore, Stranraer, Southampton,  and most famously the Sunderland. During 1943, when home to the Sunderland Flying Boats, it was the largest operational base for flying boats in the world. During World War II Pembroke Dock was targeted by the Luftwaffe. On 19 August 1940 a Luftwaffe Junkers 88 bomber flew up the Haven waterway and bombed a series of oil tanks at Pennar, the fire that followed raging for 18 days. The R.A.F. left Pembroke Dock in 1957.

The original R.A.F. station here was named R.A.F. Pembroke, which operated from July 1918 until January 1919 when it was decommissioned. R.A.F. Carew Cheriton was built in 1938 on the site of the WW1 R.A.F. Pembroke, initially equipped with grass runways. The airfield was used as a support base for the flying boat operations at Pembroke Dock. Based here was ‘B’ Flight 1 A.A.C.U. and 595 Squadron Target Towing Flight, equipped with Hawker Henleys. On 15 April 1941 12 airmen were killed in an air raid which hit the sick bay. From 1939 to 1942 the Coastal Command Squadrons- 217, 48, 320, 321, 236, 248, 254, 500 flew patrols from Carew over the Western Approaches, raids along the French coast, the escort of the Irish mail steamer and also Douglas DC-3 passenger services. Also here between 1940 to 1941 the Coastal Command Development Unit was based here, and carried out trials of a new airborne radar equipment. The airfield stopped operational flying in 1942, but became home to No. 10 Radio School, with the training of wireless operators on the radio units. The airfield is disused, though much remains, and the Control Tower has been restored by the Carew Cheriton Control Tower Group, and can be visited. The control tower is adjacent to the Carew Cheriton Showground.

R.A.F. Manorbier was opened around 1943, coming under No. 11 Group in 1944. 595 Squadron was based here from 1 December 1943 until 27 April 1946, and flew a wide variety of aircraft, including the Henley III, Hurricane IIC, Martinet, Oxford, Hurricane IV, Vengeance IV, Spitfire VB, Spitfire XII, Spitfire IX, and Spitfire XVI.

R.A.F. Fishguard was built during the latter part of World War I, when a seaplane station was established at Fishguard Harbour, operated by 245 Squadron. The site chosen was three acres to the north of the railway station and work began early in 1917. The base came under the operational control of the Vice-Admiral, Milford Haven and, following the formation of the Royal Air Force in April 1918, it became a RAF station. Seaplanes operated at Fishguard included the Sopwith Baby and various versions of the Short 184. Their role was anti-submarine and maritime protection patrols over the Irish Sea and St George’s Channel, helping to protect merchant shipping and the ferries to Ireland. The aircraft were originally operated by No’s 426 and 427 Flights, which later became No 245 Squadron, RAF. In April 1917 a Sopwith Baby, piloted by a Flight Lieutenant Bush crashed into a cliff on take-off. He was injured in the fire that followed but remained fully conscious, but died the following Tuesday. 245 Squadron disbanded after the end of the Great War, and the base was closed. A slipway near the lifeboat station is all that now remains.

RAF Templeton opened in December 1942 under the command of No. 17 Coastal Command. From January 1943 to June 1943, 306 Ferry Training Unit formed here with Bristol Beauforts, before moving to Maghaberry in Ireland. Then until December that year, Coastal Command Avro Ansons of ‘O’ Flight, No. 3 Operational Training Unit arrived from Haverfordwest, and then moved to R.A.F. St. Athan.  Next came the 1st Gunnery and Tow Target Flight, VIII USAAF, from Warton with Westland Lysander and Miles Masters towing targets for the fighters at R.A.F. Atcham, in Shropshire. 1st G&TT Flight moved to Atcham during May 1944. The Airfield was then used by 595 Squadron target towing Spitfires from Aberporth. At the beginning of 1945 Spitfires and Mosquitos of ‘A’ Flight, No. 8 OTU from Haverfordwest, and then Templeton was used by 8 OTU for aircraft repairs until they moved to Benson, and the airfield was then closed, although No 74 Gliding School Air Training Corp continued to use part of the airfield as they had done since 1944. The Royal Marines took over the camp in 1945 and it was used as a holding camp prior to de-mobilisation for Royal Marines, returning from service throughout the world. The single seater Dagling Primary Glider was also operated by No.74 Gliding School at Templeton and Carew-Cheriton, towed by an RAF Beaverette armoured car.

RAF Pembrey started as a training base for anti-aircraft gunners in 1936, with 280 Ground Defence Squadron. In 1938 plans were drawn up for an airfield and the airbase was operational by 1939. Pembrey became a Battle of Britain fighter base, and formed part of 10 Group, Fighter Command. Pembrey was home to 92 Squadron from 18 June 1940, and then to 79 Squadron, from 8 September 1940. The area saw a great deal of action with both the airfield and the nearby Royal Ordnance Factory at Pembrey being major targets for German bombers, and it is believed that 25 official kills were accredited to aircraft flown out of Pembrey during this time. In 1941 Pembrey became an RAF Gunnery School, equipped with Vickers Wellington’s, Fairey Battles and Bristol Blenheim’s, using the airfield’s Spitfires as dummy targets to teach the crews how to shoot down enemy fighters. Wing Commander Guy Gibson, V.C., of ‘Dambusters’ fame was once stationed at Pembrey.

A noteworthy incident was the story of Oberleutnant Arnim Faber, Adjutant of III fighter Gruppe of JG2, who on 23 June 1942 had engaged Spitfires over the south coast of Britain and on heading towards Exeter, mistook the Bristol Channel for the English Channel. Being short on fuel, he landed at Pembrey believing it to be a Luftwaffe airfield in France. The Pembrey Duty Pilot, a Sgt. Jeffreys, grabbed a Very pistol and ran from the control tower and jumped onto the wing of Faber’s aircraft as it taxied in. Ironically, Faber was piloting the latest enemy fighter, the Focke Wulf 190A, a type the RAF had only ever seen flying over France. Below is a photograph of the actual aeroplane, courtesy of the Imperial War Museum.

In 1945 Fighter Command once again took over the base, and RAF Pembrey became home to 233 Operational Conversion Unit which flew De Havilland Vampires and Hawker Hunters. On its closure on 13 July 1957, Princess Margaret flew on the last Valetta aircraft to leave the runway. There were five huge hangers for bombers and a number of smaller blister-roofed hangers for fighter aircraft but these were taken down in 1962 and only two remain. There was an observation tower near Allt Cunedda Farm, a radio station on the Pinged Road and a domed star navigation building that still stands on the approach to the airfield. There were a series of anti-aircraft batteries and numerous pillboxes to defend the area, as well as numerous concrete anti aircraft emplacements used to train Gunnery crews. Along the railway line tank blocks protected against invasion and along the top end of Cefn Sidan, the stakes that defended against landings are still visible at low tide.

Pembrey has been host to many Squadrons and aircraft types over its time. The following were the main Squadrons stationed at Pembrey during its active history. Although not an extensive list, it gives an insight into the character of Pembrey during its service history:

Just after the outbreak of World War Two, the Air Ministry began the construction of two Type 2 hangars and their taxi aprons as well as two grass airstrips on the site originally known as RAF Blaenanerch. The airfield officially opened on 1 September 1940 and in November became re-named R.A.F. Aberporth, to reflect its association with the nearby Royal Aircraft Establishment.

R.A.F. Aberporth was first used by No 1 Anti-Aircraft Co-operation Unit, which was equipped with Westland Wallace and Hawker Henley aircraft which towed target drogues, providing training for ground batteries. The airfield continued in this training role throughout the war, operating further aircraft such as the de Havilland Queen Bee radio controlled drones, Miles Martinets, and Vultee Vengeances. The units based at Aberporth became known as 595 Squadron, Royal Air Force in December 1943.

RAF Rudbaxton was a satellite station of RAF Haverfordwest. It was most unusual in that it was a secret airfield, operating Westland Lysander aircraft in support of Special Operations Executive (SOE) and Special Air Service (SAS) operations in France. The Corner Piece pub on the main A40 road was the ‘Watch Office’ (i.e. Air Traffic Control).

RNAS Lawrenny Ferry (HMS Daedalus II) housed 764 Naval Air Squadron from October 1941 to the end of the war. It functioned as an Operational Conversion Unit, operating the Supermarine Walrus, Fairey Swordfish and Vought-Sikorsky Kingfisher floatplanes, and as a Care and Maintenance Unit from 24 October 1943. 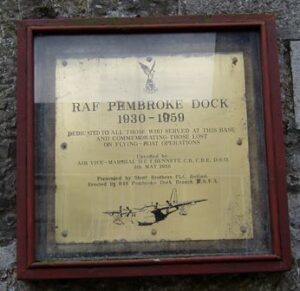 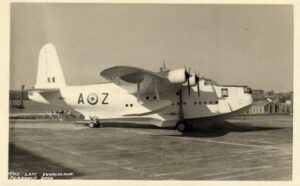 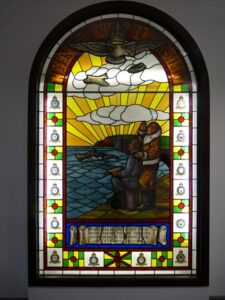 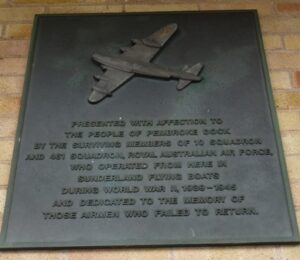