After the outbreak of the Second Boer War in South Africa in 1899, the idea was muted in Wales that the Principality should form and finance a Welsh Hospital in South Africa, to care for wounded and sick soldiers. The idea was passed onto the prominent Welsh Doctor, John Lynn Thomas, of Milford Haven, who telegraphed the eminent Welsh Doctor, Professor Alfred Hughes, to ask him to become the Secretary. Fundraising events then began around the country, with the wealthy North Walian magnate, George Douglas-Pennant, Lord Penrhyn, taking a particular interest in the idea. The War Office, struggling already to cope with battle casualties, was eager for private enterprises to set up such hospitals, and pledged to supply transport and rations for the staff, and so fundraising for the enterprise came underway throughout the Principality. 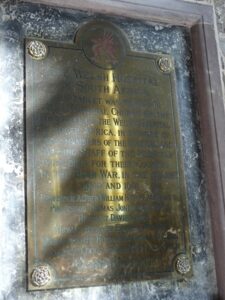 The staff and equipment of the Welsh Hospital left Southampton on 14 April 1900 aboard the S.S. Canada, under the command of Major J.W.Cockerill, Royal Army Medical Corps with Professor Jones of the Victoria University, Manchester, as chief surgeon. The staff comprised of three senior surgeons, two assistant surgeons, eight medical students and dressers, ten nursing sisters, two maids, forty eight orderlies, cooks, and stretcher bearers. The voyage was uneventful, apart from the deaths of two Imperial yeomanry troopers, and Canada arrived at Cape Town at dawn on 3 May 1900, the spectacular sight of Table Mountain greeting the early risers.

The hospital staff disembarked later in the day, and for a day or two remained in billets in various hotels in Cape Town, where Major Cockerill received his orders that his staff were to proceed to Springfontein, the railway junction in the Orange Free State of the Cape Town and Port Elizabeth Railways. Whilst preparing for the move, the Principal Medical Officer asked if the hospital would instead move to Bloemfontein and help in the Military Hospital there.

Embarking by train over the coming days, the staff made the journey to Bloemfontein, only were distributed temporarily between several hospitals there, which were found to be full of patients suffering from typhoid and dysentry, with just a few wounded. The town seemed to be ‘soaked with infection’, and unfortunately one of the medical students who had volunteered for service, Thomas Richard Eames, of Carnavon, died on 27 May, and was buried in Bloemfontein.

On the following day, the staff were recalled to Springfontein, and moved to a camp which had been prepared under the supervision of Major Cockerill, which comprised of standard pattern canvas marquees. Many of the necessities of camp life which hadn’t been brought on the voyage were purchased in Cape Town, and transported to Springfontein aboard the railway, and the work of building and equipping this new Welsh Hospital camp was made even more difficult by the fact that all available transport had been requisitioned for use by the military.

According to one staff member at the time: ‘Springfontein is a melancholy looking place. We have no trees or green of any kind in sight, the surface of the ground is covered with patches of parched up stubble, and we are surrounded by a circle of stony hills. On a gently sloping plain to the east of the railway, between the growing camp of the 3rd Durham Light Infantry, lies the site chosen for the Welsh Hospital. A better one could hardly have been selected, and we can only hope that the bracing air of the place may prove beneficial to our patients.’

By 3 October 1900 the hospital was converted into a convalescent hospital, and as a result, many of the senior staff members left South Africa to return home. During the period the Welsh Hospital was in operation, it lost three Surgeons, one Dresser and one Nurse.

The surviving members of the Welsh Hospital staff subscribed to a memorial in memory of their late colleagues, which was unveiled in the Cathedral Church of St. David’s on 14 August 1902 by Lord Penrhyn. At the top of the memorial is a heraldic representation of the Red Dragon of Wales, while the inscription reads:

THE WELSH HOSPITAL IN SOUTH AFRICA.

This tablet was placed in this Cathedral Church by the Committee of the Welsh Hospital in South Africa in memory of those members of the medical and nursing staff of the hospital who died for their country in the Boer war in the years 1900 and 1901.

There is also a memorial in Cathay’s Park, Cardiff recording the names of those lost.

Herbert Davies, M.B., Surgeon, Welsh Hospital. Herbert was the son of Henry and Mary Davies, of Cams Lodge, Preston, Lancashire. He was educated at Shrewsbury School, and Owen’s College, Manchester, and took the M.B., and Ch.B. Degrees at Victoria University in 1898. He had been House Physician at the Brompton Hospital for Consumption, and was House Surgeon to the Royal Infirmary, Manchester. At the outbreak of the Boer War he volunteered for active service, and proceeded soon afterwards to South Africa to join the staff of the Welsh Hospital. Herbert died at Springfontein of dysentery on 15 June 1900, aged 26, and is buried in Springfontein Military Cemetery.

Thomas Richard Eames, Dresser, Welsh Hospital. Thomas was the son of William and Rebecca Eames, of Bangor, Caernarvonshire. He had been educated at Oswestry School, and was a Medical Student at Owen’s College, Manchester at the outbreak of the Boer War. He volunteered to work in the Welsh Hospital, and became its first staff member to fall ill and died at Bloemfontein on Sunday 27 May 1900, aged 26. Thomas is buried in Springfontein Military Cemetery.

Alfred William Hughes, M.B., F.R.C.S., Professor, Welsh Hospital. Alfred was the son of Robert and Jane Hughes, of Vronwen, Talyllyn. He began his medical career with Dr Jones at Corris, before becoming a student at Edinburgh University, and was later appointed demonstrator of anatomy in the School of Medicine. Whilst in Edinburgh he married Mary Ann McKelvie, the sister of a wealthy Scottish Merchant. He left Scotland for a short time to take up a practice in Flint, but returned to Edinburgh in a year or two to resume his teaching in the School of Medicine and the Ladies’ Medical School. He again returned to Wales to become Professor of Anatomy at the University College, Cardiff, but due to his wife’s ill-health, he moved to London to become Professor of Anatomy at King’s College. He was at King’s College when he volunteered to join the staff of the Welsh Hospital in South Africa. Alfred returned to Wales after the closure of the Welsh Hospital, and died at home in 7, Chester Terrace, Regent’s Park, London on 3 November 1900. There are conflicting reports about the cause of his death, but Alfred’s body was brought home to North Wales and he was buried in Corris Churchyard.

Thomas Jones, M.B., F.R.C.S., Professor, Welsh Hospital. Thomas was born on 18 October 1848, the son of David and Elizabeth Jones, of Llanllawddog, Carmarthenshire. He had married Annie Maria Boyd, of Rusholme, Manchester by 1881. He was educated at Derlwyn College, which his father had established, and then the Normal College at Swansea, and from there matriculated at London University. He gained the Gold Medal in organic chemistry and material medicine and honours in anatomy at the 1st MB examination in the University of London, and was first in honours at the BS examination in 1879. He became resident pupil at the Northern Hospital, Liverpool, in 1865, and at the same time attended classes of lectures at the Liverpool School of Medicine. He then became a student at Guy’s Hospital, where he remained six years, where he became dresser to John Poland, who allowed Thomas to perform major operations under his supervision. This experience led to Thomas becoming House Surgeon, which post he held prior to becoming a founding member of the Welsh Hospital, and embarking for South Africa as Surgeon in Chief. Thomas became ill and died on 18 June 1900, aged 51, and is buried in Springfontein Military Cemetery.

Marion Lloyd, A.N.C., R.R.C., Sister, Army Nursing Service. Marion was the daughter of John Phillips Lloyd and Rachel Lloyd, of Penralltybie, Llandygwydd, Cardiganshire. She had been Matron of the Bolton Infirmary, before volunteering to join the staff of the Welsh Hospital in South Africa as Matron. She was gazetted with the Royal Red Cross for her work in South Africa, and had been asked to join the medical staff in Bechuanaland, but became ill, and died at Springfontein on 17 December 1901, aged 35. Marion is buried in Springfontein Military Cemetery. 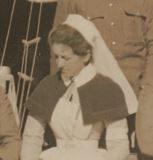 Florence Louise Sage, Nursing Sister, Army Nursing Service. Florence was born on 27 November 1867, the daughter of Thomas and Louise Sage, of 39, Romilly Crescent, Canton, Cardiff. She had trained at the Taunton and Somerset Hospital, before volunteering to join the staff of the Welsh Hospital, and sailed with the original staff on 14 April 1900. Florence became ill soon afterwards, and died of dysentery on 12 June 1900, aged 32. She is buried in Springfontein Military Cemetery. 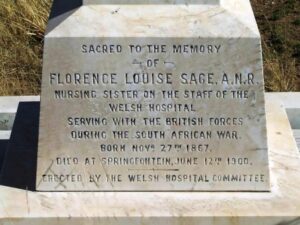