Llanelli Boer War Memorial is situated in the grounds in front of the Town Hall, and was erected to commemorate the men of the town who gave their lives during the Anglo-Boer War of 1899 to 1902. It was unveiled on 26 August 1905 by Field Marshall, Earl Roberts, VC, who had commanded these men during the war, and was a close friend of General Sir James Hills-Johnes, VC. 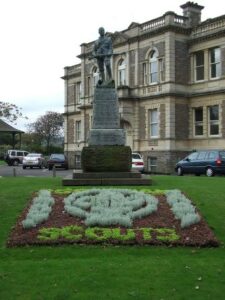 ‘THIS MEMORIAL WAS ERECTED BY PUBLIC SUBSCRIPTION IN HONOUR OF THE MEN OF LLANELLY AND DISTRICT, WHO, AT THE EMPIRE’S CALL, LAID DOWN THEIR LIVES DURING THE WAR IN SOUTH AFRICA, 1899-1902’

Commander-in-Chief of the Forces

Joseph Davies, Corporal, 2109, 1st Battalion, Welsh Regiment. Joseph was born in 1869, the son of William and Jane Davies, of Heol Las, Five Roads. He had served with the army for several years prior to becoming a reservist, and returned to Five Roads, to work as a driver. Upon the outbreak of the Boer War in South Africa, Joseph was recalled to the colours, but married Dora Ann Lloyd, at Felinfoel prior to embarking with the 1st Battalion, Welch Regiment aboard the Kildonan Castle. The battalion arrived at the Cape by 22 November 1899, and was despatched to the Cape Colony. Joseph was killed in action during the Welsh Regiment’s successful assault on the strongly defended Boer position at Driefontein on 10 March 1900. He was 30 years old, and is buried at Driefontein, Bosrand. Joseph is also commemorated on the new memorial at Five Roads.

Richard  Howell, Corporal, 248, Diamond Fields Horse. Richard was from Felinfoel, and was the son of David and Margaret Howell, of the Hope and Anchor, Llanelli. He was a carpenter who had played cricket for Llanelli, but had resided at Aberdare prior to the war. He was among 19 men killed in action at Carters Ridge, Kimberley on 28 November 1899. He was 24 years old, and is buried at Kimberley, and commemorated on the Honoured Dead Memorial. Richard is also commemorated on the Felinfoel War Memorial.

John Jones, Private, 6633, 2nd Battalion, South Wales Borderers. John was from Llanelli. He was killed in action at during the Boer attack on Modderfontein on 2 February 1901. He is buried at Potchesfstroom, North West Province.

James Arthur Leonard, Private, 1st Battalion, Welsh Regiment. Arthur was son of James and Sarah Leonard, and the brother of William Frederick Leonard, of the Temperance Hotel, Llanelli. He had served in South Africa with the 1st Welsh, and had taken part in several engagements before becoming ill. He was sailing back to England when he died aboard ship of enteric fever on 24 May 1900, aged 19. The Leonard’s had sadly already lost two other children at a young age, Florence at two years, and Albert at ten years.

Tom Owens, Private, 5509, 1st Battalion, Welsh Regiment. Tom was from Llanelli. He was killed in action at Paardeberg Drift on 18 February 1900, during the retreat from Kimberley. He is buried at Vendusi Drift, Paardeberg.

Samuel Smedley, Private, 2664, 1st Battalion, Welsh Regiment. Samuel was born in Derbyshire in 1871, and had moved to Llanelli with his brother George by 1891. Samuel was killed in action at Driefontein on 10 March 1900. He is buried at Bosrand, Driefontein. The Smedley family suffered more pain in the summer of 1900, when George’s twin girls, Gladys Pretoria and Sybil Mafeking Smedley were born, but sadly died within weeks of each other.

John Wales, Trooper, 3672, 6th Dragoon Guards (Carabiniers). John was the son of David and Margaret Wales, of Pembrey. He was killed in action near Klipstapel on 23 April 1901, aged 31. He is buried at Ermelo, Mpumalanga.

Ernest Robert Webb, Trooper, 23361, 9th Battalion, 30th (Pembrokeshire Yeomanry) Company. Ernest lived at Great Western Terrace, Llanelli, and had served with the Yeomanry for several years prior to the war. He died of enteric fever at Harrismith on 29 May 1901, aged 21. He is buried at Harrismith Town Cemetery. 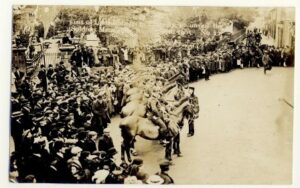