Welsh Hook is a small village located in a rural location between the town of Fishguard, which is seven miles to the north and the county town of Haverfordwest, some ten miles to the south, near the villages of Letterston and Wolfscastle. The village is served by its small Church, which is dedicated to St. Lawrence, and in its Churchyard lies the village war memorial, a family grave to the James family, which commemorates the sole person of Welsh Hook who was killed during the Great War, their son, Arthur. 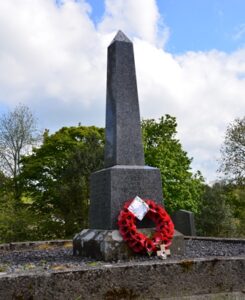 Arthur James, Private, 29195, South Wales Borderers. Arthur was the son of Thomas and Hannah James, of Welsh Hook, Wolfscastle. He enlisted into the army and was posted to the 6th Battalion, South Wales Borderers, which was the Pioneer Battalion to the 25th Division. He probably joined the battalion on the Somme in 1916 and the following year would have taken part in the Third Battle of Ypres, or Passchendaele. Following the German Spring offensive on the Somme, which was launched on 21 March 1918, the 25th Division was moved south to the Bullecourt sector, to help reinforce the line. It moved back to Flanders within a week and got caught up in the German Lys offensive, which was launched on 9 April. After suffering terrible casualties, the 25th Division was among a number of battered units sent to the Aisne sector to recuperate however, unbeknown to the Allies, the Germans launched their third, and final, offensive of the war on the Aisne on 27 May 1918. Arthur was taken prisoner on 27-28 May and ended up in a prisoner of war camp in Merseburg, Germany, where he died on 15 October 1918, aged 20. He is buried in Berlin South-Western Cemetery, Germany. His elder brother, Albert, was serving with the Welsh Regiment. 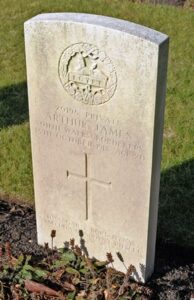 The back of the memorial appears to have an inscription to Leonard Thorne, but from my photographs, I cannot make out what else it says, as the paint on the lettering had eroded.