Warren is a parish in the hundred of Castlemartin, five miles south-west of Pembroke. The parish is served by St. Mary’s Church, which dates from the 13th Century. The parish is next to Castlemartin firing range, and the church contains memorial boards with the regimental crest of units who have used the ranges. There is also a marble memorial to A. T. Roch, and also two war graves in the churchyard. 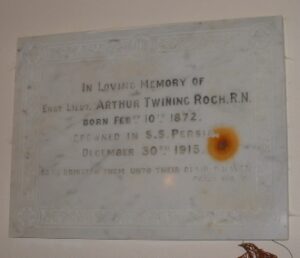 Arthur Twining Roch, Engineer Lieutenant, Royal Navy. Arthur was born at Castlemartin in 1872, the son of John Jones Roch and Martha Elizabeth Roch, of Longstone Farm, Castlemartin, Pembroke. He married Catherine Wood in Cairo in 1901, and the couple had two children. Arthur served with the Royal Navy, and at the outbreak of the Great War was serving aboard HMS Proserpine. Proserpine was a Pelorus class cruiser that served at Gibraltar, and in the Suez Canal. Later in 1915 she was relieved from that duty, and sent to support the British intervention in Mesopotamia. Arthur had spent some time at home on leave prior to this, and during December 1915 was back in the Mediterranean aboard the passenger ship SS Persia. On 30 December 1915, Persia was torpedoed by the German submarine U38, and sank with the loss of over 330 passengers and crew. Arthur was among the dead. He was 42 years old, and is commemorated on panel 8 of the Chatham Naval Memorial, Kent.

Richard Vernon Hopps, Captain, 64311, Royal Artillery. Richard was born at Sunderland in 1908. He was serving with the Royal Artillery prior to the war, and on 20 March 1935 was commissioned Lieutenant from Denstone College OTC into the 102nd (Pembroke & Cardigan) Field Regiment, Royal Artillery. Richard was probably training at Castlemartin, when he met, and married, Nesta Llewellyn Roch, of Warren in 1937, and the couple resided at Merlins Cross. Richard had been promoted Captain by the time that he died at Castlemartin on 6 February 1940. He was 31 years old, and is buried at Warren (St. Mary) Churchyard. 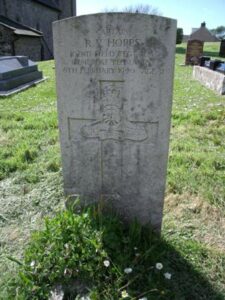 Anthony Humphrey Lewis Jones, Captain, 346334, Royal Engineers. Anthony was born at Swansea in 1925, the Son of Sir Lewis Jones, and Lady Jones (nee Willis), of Swansea. He was commissioned in June 1945 into the Royal Engineers, and embarked for the Far East. Anthony remained on active service in India after the armistice with Japan, and died there on 14 August 1947. He was 22 years old, and is buried at Karachi War Cemetery, India.

John Henry Lloyd, MBE, Warrant Officer I, 281200, Royal Air Force. John was born in Pembrokeshire in 1897, probably the son of John and Anna Lloyd. He served during World War Two with the Royal Air Force, being awarded the MBE in the New Years Honours list of 1 January 1943. John survived the war, but died in Pembrokeshire on 27 April 1947. He was 50 years old, and is buried at Warren (St. Mary) Churchyard. 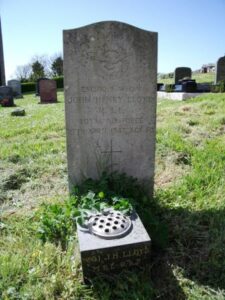 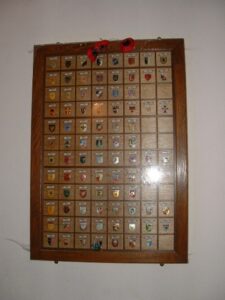