Walwyn’s Castle is a parish situated about five miles south-west of Haverfordwest, and four miles north-north-west of Milford Haven. The parish church is dedicated to St. James, and contains a single war memorial to Edwin Thomas, a Clerk to the Church, who fell during the Great War. Another soldier who fell during the Great War is commemorated on his parent’s grave within the churchyard, and although he is commemorated at Steynton, I have added his details to this page. Also commemorated on a local grave at nearby Robeston West is William Morris, a man who is not commemorated on any memorial locally. Lieutenant-Colonel Hugh Thomas Kay Robinson, son of the Reverend William Kay Robinson, Rector of Walwyn’s Castle, also fell during the war, yet there appears to be no memorial to him locally. As a result, I have created this page for the website to ensure commemoration of these men. 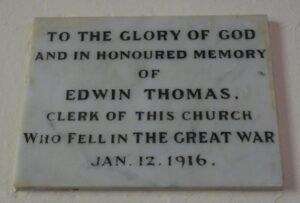 William Henry Thomas Davies, Private, 54489, Welsh Regiment. William was the son of Robert Septimus Davies and Emma Davies (nee Phillips), of Dale Road, Steynton. He enlisted there into the army, and was posted to France late in 1916 to join the 15th Battalion, Welsh Regiment, the Carmarthen Pals battalion. The battalion had been in France since December 1915 attached to 114 Brigade, 38th (Welsh) Division, and had taken part in the capture of Mametz Wood in July 1916, before moving via Hebuterne to Boesinghe, north of Ypres. On 31 July 1917 the 15th Welsh took part in the assault on Pilckem Ridge, successfully capturing their objectives. During the following days, the battalion remained in the front line, and played a part in the Battle of Langemarck. After a winter near Armentieres, in April 1918 the Division was moved to positions near Aveluy Wood on the Somme, where it remained until it crossed the River Ancre from 21 August 1918 onwards, and successfully captured Thiepval and Pozieres Ridges over the coming days. The Welshmen then advanced over the old Somme battlefields of 1916, capturing Longueval and Delville Wood, before taking part in the Battle of Morval. After the capture of Morval village, the division advanced towards Sailly-Saillisel. William was killed at Sailly on 4 September 1918, aged 25. He is buried at Sailly-Saillisel British Cemetery, France. 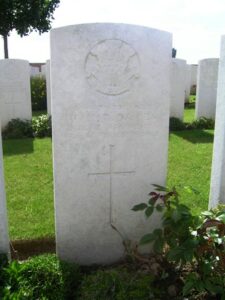 William Morris, Private, 14740, Welsh Regiment. William was born in 1897, the son of David and Ellen Morris, of East Lodge, St. Ishmaels. He enlisted at Milford into the 9th Battalion, Welsh Regiment, which was attached to 58 Brigade, 19th (Western) Division. The Division crossed to France during July 1915, and moved to positions around Givenchy, near Loos, where it began trench initiation and training. William was wounded soon after arriving in France, and died of his wounds on 23 August 1915. He was 19 years old, and is buried at Merville Communal Cemetery, France. William is commemorated on his parent’s grave at Robeston West. 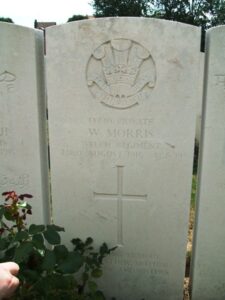 Hugh Thomas Kay Robinson, DSO, Lieutenant-Colonel, Royal Sussex Regiment. Hugh was born at Walwyn’s Castle on 26 May 1879, the son of Reverend William Kay Robinson, Rector of Walwyn’s Castle, and his wife Sarah. He was educated at St. Edmund’s School, Canterbury, before joining the Clergy Mutual Assurance Society and was a Fellow of the Institute of Actuaries. Hugh married Rose Evelyn Moyer at St. Matthias Church, Earl’s Court, London on 10 November 1906. Following the outbreak of war, Hugh joined the Inns of Court O.T.C. and was gazetted to the Royal Sussex Regiment as a Second Lieutenant on 31 March 1915. He embarked for France in March 1916 with the 12th Battalion, Royal Sussex Regiment, and on 9 August 1917 was promoted to the command of the 13th Battalion, Royal Sussex Regimen. The battalion, a Pals Battalion raised in the Southdowns, was attached to 116 Brigade, 39th Division, and had been in France with his previous battalion since March 1916. Hugh had already been awarded the Distinguished Service Order for his gallantry on the Somme, at the Schwaben Redoubt, the previous year, and was awarded a Bar to his DSO soon after taking command of the 13th Royal Sussex, for their actions at Tower Hamlets and Shrewsbury Forest, during the Battle of Passchendaele. In January 1918 the Division withdrew from the Ypres Salient, and moved south, moving to Heudicourt before taking over a section of the front line facing the Hindenburg Line. On 21 March 1918, the Germans launched their Spring Offensive along the section of front running south from Croisilles to La Fère, and Hugh commanded his battalion with great gallantry during the terrible period which ensued. His battered battalion had been so weakened during the fighting, that following the Divisions relief, and move to the Wytschaete sector to rest, it was formed into No. 2 Composite Battalion. On 9 April 1918 the Germans launched the second phase of their offensive along the Lys Valley, and Hugh’s tired unit was thrown into fierce fighting once more. Hugh was killed in action near his HQ at the Spoilbank, Ypres, on 26 April 1918, whilst leading the battalion in a fierce defence. The 37-year-old has no known grave, and is commemorated on the Tyne Cot Memorial, Belgium. He was posthumously awarded a second Bar to his DSO. The citation for the award read: ‘For conspicuous gallantry and devotion to duty while commanding a composite battalion. He handled his battalion, in such a way as to prevent the enemy entering a gap in the line, and so turning the right flank of the division. Later, when in command of another battalion, he, by skilful leadership and courageous example, caused the enemy’s advance to be checked at a critical moment with heavy loss.’ (His first DSO was gazetted 4 June 1917, and his 1st Bar gazetted 17 December 1917). 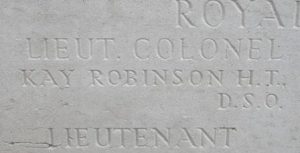 Edwin Thomas, Private, 15904, Welsh Regiment. Edwin was the son of James and Ellin Thomas, of Woods End, Robeston West. He enlisted at Haverfordwest into the Welsh Regiment, and was posted to France in December 1915 with the 10th Battalion, Welsh Regiment, which was attached to 114 Brigade, 38th (Welsh) Division. The division moved to positions in the Fleurbaix sector for trench initialisation and training, and on 10 January 1916 moved into the front line at Riez Bailleul. Edwin was a signaller, and was positioned in an isolated post on 12 January when the battalion made an experimental demonstration of raising dummies above the trenches to test the Germans opposite. The Germans retaliated by shelling the Welshmen’s positions, killing Edwin and two other signallers, when their post suffered a direct hit that day. Edwin was 21 years old, and is buried at Pont-Du-Hem Military Cemetery, La Gorgue, France. 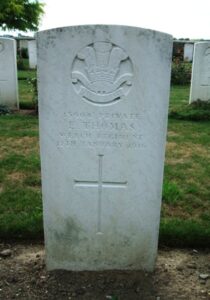