Tufton and Henry’s Moat are two small villages, with Tufton situated along the B4329 road from Haverfordwest to Rosebush, and Henry’s Moat half a mile south-east. There is a small memorial plaque inside Horeb Chapel at Henry’s Moat, which is inscribed with the names of two local men who died during World War Two. Also two men who fell during the Great War are commemorated on their parents graves inside the cemetery of Siloh Chapel, and these men have been added to this page. 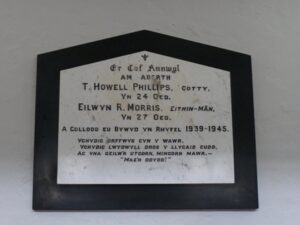 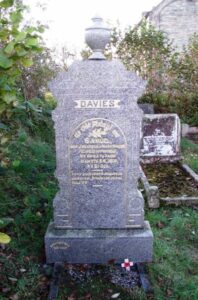 David Bevan Jenkins, Fireman, Mercantile Marine. David was the son of William Stephen Jenkins and Margaret Jenkins, of The Cottage, Fishguard. He served in the Mercantile Marine, as Fireman aboard the S.S. Franz Fischer, a London registered gargo steamer. The Franz Fischer was attacked by a German Zeppelin on 1 February 1916, and David was killed. He was 27 years old, and is commemorated on the Tower Hill Memorial, London.

Benjamin Williams, Private, M/296920, Army Service Corps. Benjamin was born at Holmus Fach, Henry’s Moat, the son of Benjamin and Anne Williams. Very little is known of him, but he died of sickness on 21 April, 1917 aged 31, and is buried at Henry’s Moat (Horeb) Baptist Chapelyard. 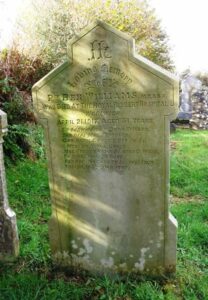 Eilwyn Rees Morris, Leading Aircraftman, 536055, Royal Air Force. Eilwyn was the son of John Lewis Morris and Margaret Ann Morris, of Tufton, and the Husband of Margaret Anne Morris, of Pembroke Dock. He served with 210 Squadron, RAF, which was a Coastal Command Squadron, equipped with the Short Sunderland. Eilwyn was killed when his Sunderland was lost at sea on 29 June 1940. He was 27 years old, and is commemorated on Panel 23 of the Runnymede Memorial, Surrey.

Tom Howell Phillips, Private, 7625457, Royal Army Ordnance Corps. Tom was the son of Edmund H. Phillips, and of Emily Phillips, of Clynderwen. He served with the Royal Army Ordnance Corps, attached to the 68 Medium Regiment, Royal Artillery. The regiment moved to the Middle East in November 1940, before being posted to Eritrea. Tom died in Eritrea on 6 May 1941, aged 24, and is buried at Asmara War Cemetery, Eritrea. His regiment was completely captured by Rommel’s forces at Tobruk the following year. Tom is also commemorated on his parent’s grave at Henry’s Moat. 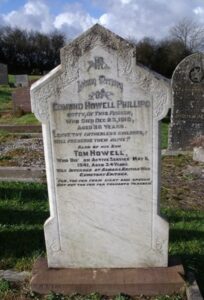 Thomas Lyn Thomas, Corporal, 127524, Royal Army Service Corps. Thomas was the son of J. Edward and Lizzie Thomas, of Tufton. He served with 1 Field Butchery, Royal Army Service Corps. The unit was based in Greece when the Germans launched their invasion in April 1941. Thomas was killed at sea during the evacuation of the British troops from Greece, at some time between 25 and 26 April 1941. He was 23 years old, and is commemorated on the Athens Memorial, Greece. Tom is not commemorated at Tufton.