Trefin is situated on the Pembrokeshire Coastal path, between Fishguard and St. Davids. It is sometimes given the anglicised spelling Trevine. The area is within the Pembrokeshire Coast National Park, and is a favoured tourist destination. Nearby villages include Llanrhian, Abercastle, Porthgain, Mathry, Square and Compass, Penparc and Croesgoch. The memorial to the fallen men of Trefin during the Great War takes the form of a framed scroll, and commemorates the four local men who gave their lives. Many thanks to Martin Small for sending in a photo of the memorial. 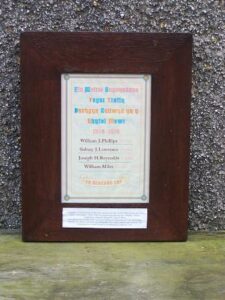 Sidney James Lawrence, Private, 52972, Welsh Regiment. Sidney was born in 1894, the son of Catherine Lawrence. He married Ruth Reynolds, of Pant-y-Ffynon, Trefin late in 1914. Sidney enlisted at Carmarthen into the army, and was posted to France during 1916, where he joined the 2nd Battalion, Welsh Regiment. The battalion had been in France since the outbreak of war, attached to 3 Brigade, 1st Division, and had fought in the retreat from Mons to the Marne, before moving to Ypres later in 1914. Sydney probably joined the battalion on the Somme in the summer of 1916. They followed the German retreat to the Hindenburg Line in early 1917, and were then briefed for an operation on the Flanders Coast, and moved there during the summer of 1917. While training on the coast, the Battle of Third Ypres had stalled in the mire, and the Division were recalled to Ypres, where they fought at the Second Battle of Passchendaele.  After spending another winter in Flanders, they were near Estaires when the German Spring Offensive caught them, and it was during the ensuing fighting that Sidney was killed in action, on 9 April 1918, aged 24. He is buried at Beuvry Communal Cemetery Extension, France. Ruth’s brother Joseph Reynolds also fell. 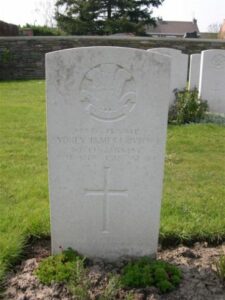 William Miles, Private, 24399, South Wales Borderers. William was the son of William and Mary Miles, of The Square, Mathry. He resided at Trefin prior to the war, working as a Teamster on a local farm, and enlisted at Haverfordwest into the Welsh Regiment, with the number 37840. William was then posted to the 12th Battalion, South Wales Borderers, which was attached to 119 Brigade, 40th (Bantam) Division. This Division was formed between September and December 1915, composed of bantam units and others which had a mixture of regulation-height and shorter men. The 12th South Wales Borderers were among the first units of the Division in France, landing on 1 June 1916. The remainder of the Division had joined them by 10 June 1916, moving to the front near Loos. William was killed at Loos on 3 September 1916. He was 22 years old, and is buried at Philosophe British Cemetery, Mazingarbe, France. 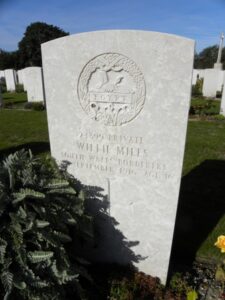 William James Phillips, Private, 201432, Welsh Regiment. William was the Son of John and Mary Phillips, of Barry Terrace, Trefin. He enlisted at Mathry into the 1/4th Battalion, Welsh Regiment, which was the local Territorial Battalion, attached to 159 Brigade, 53rd (Welsh) Division. The Division landed at Cape Helles, Gallipoli, on 9 August 1915, and was immediately thrown into action, spending the next few days in isolated pockets, fighting against a Turkish counter-attack during the Battle of Sari Bair, and then at the Attack on Scimitar Hill. The Division remained here throughout the coming months, and suffered severe losses in manpower strength during the great November 1915 blizzard on Gallipoli, when its total strength was reduced to less than that of a full-strength Brigade. On 11 December 1915 the Division was evacuated to Mudros, and by 23 December 1915 were moved to Egypt. They remained on the Suez Canal Defences for the next twelve months, where it took part in operations against the Sultan of Darfur, and in March 1917 took part in the advance into Palestine. William must have been attached to the 8th Welsh, as he died in Mesopotamia on 10 October 1917. He was 20 years old, and is buried at Baghdad (North Gate) War Cemetery, Iraq.

Joseph Henry Reynolds, Lance Corporal, 41536, Royal Engineers. Joseph was the son of Henry and Ann Reynolds, of White House, Trefin. He enlisted at Haverfordwest into the army, and was posted to France, where he joined Z Special Company, Royal Engineers. The Special Companies were early chemical warfare specialists, trained in the handling and delivery of poison gas on the battlefields, using either cylinders or trench mortars. Joseph was wounded during the summer of 1918, and was evacuated to the Base Hospital at Wimille, where he died of his wounds on 18 August 1918, aged 22. He is buried at Terlincthun British Cemetery, Wimille, France. His sister’s husband, Sidney James Lawrence, also fell. 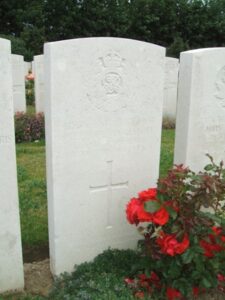 John Islwyn Davies, Chief Steward, Merchant Navy. John was the husband of Mildred M. Davies, of Trefin. He served with the Merchant Navy, aboard SS Chulmleigh, a London registered Steamship. On 5 November 1942, Chulmleigh was bombed and damaged by a German Ju88 aircraft, and beached at South Cape, Spitzbergen. At 15.58 hours on 6 November, the German submarine U-625 torpedoed Chulmleigh and destroyed her with gunfire. Later the wreck was again bombed by a Ju88. The master, three crew members and nine gunners survived, but 36 crew members and nine gunners were lost, many dying of frostbite and exposure in the coming days. John is listed as having died on 10 November 1942. He was 30 years old, and is commemorated on the Tower Hill Memorial, London. 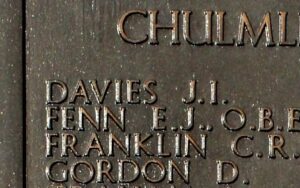