Trefgarne Owen is a small hamlet situated deep in Pembrokeshire, about five miles east of St. David’s and five miles west of the main A40 road from Haverfordwest to Fishguard. On the outskirts of the village lies Penuel Chapel and Chapelyard. Among the headstones is the one of Essex Thomas, Deacon of the Congregational Church, and Dorothy Thomas, which also commemorates their youngest son Llewellyn, who died as a prisoner of war in 1918. There does not appear to be any other war memorials in the village, however if anyone knows otherwise, please contact me via the website so that I can amend this document.

Llewellyn Howell Thomas, Private, 52836, East Yorkshire Regiment. Llewellyn was the son of Essex and Dorothy Thomas, of Penygorse, Penycwm, Trefgarne Owen. He worked on his father’s farm at Penygorse, alongside his two brothers, but when conscription was brought in was told to enlist. His father appealed his conscription on the grounds that Llewellyn was needed on the farm, but the appeal was turned down as his two brothers already worked it and that they should be enough help. On 1 May 1916 Llewellyn had to leave home to join the Welsh Regiment at Carmarthen. After undergoing training he was transferred to the 1/4th Battalion, East Yorkshire Regiment, which was in France attached to 150 Brigade, 50th (Northumbrian) Division. He probably joined the battalion in time to take part in the Second Battle of Passchendaele. The Division remained at Ypres for the winter before transferring south to positions near St. Quentin, where it was hit by the German Spring Offensive of 21 March 1918. The division took part in a gallant rearguard action during the Actions at the Somme Crossings, and then at the Battle of Rosieres and after suffering terrible casualties was moved north to Flanders to rest and rebuild. On 9 April the Germans launched an attack in Flanders, around the Lys, and the Division took part in the Battle of Estaires, and the Battle of Hazebrouck. The battered division saw much fighting again and was among a number moved south to a quieter sector on the Aisne, joining IX Corps. Unfortunately the Germans launched their third, last ditch, offensive here in May and the division was again hit hard. Llewellyn was wounded and taken prisoner here and was taken to a hospital in the mediaeval town of Coucy-le-Château-Auffrique. He died as a prisoner of war on 8 August 1918, aged 25, and was buried in Coucy-le-Château German Cemetery, along with five other British soldiers. Five of the six graves were lost following further fighting in the area, so Llewellyn and his comrades are now commemorated on special memorials in Chauny Communal Cemetery British Extension, France. The sixth man’s grave, Private Reginald Martin, of Bournemouth, was identified by the remains of a cross and he was exhumed and re-interred in Chauny in 1922. 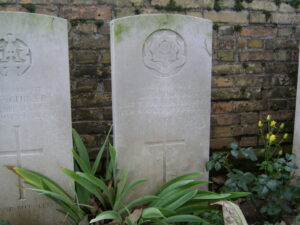 The gravestone of Llewellyn’s parents 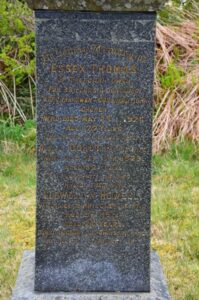 The remains of the keep of the Château de Coucy. The castle was still complete by the time of the Great War, but when the Germans retreated to the Hindenburg Line in March 1917 they dynamited the four towers and the keep, much to the contempt of the local population. War reparations allowed for the consolidation of the ruins and clearing of the towers, but the ruined keep was kept as it was to show as an example of ‘German Barbarism’ by the French.

The castle is still an impressive site while driving back from a trip to Soissons and the old Aisne battlefields to Picardy, and is located just seven miles south of Llewellyn’s memorial at Chauny, on the road to Soissons. Both his memorial and his original burial site can be visited easily in a day.