St. John’s Methodist Church in Tenby is situated at South Parade. There are two small Great War Memorial plaques inside the Church, one made of bronze, inside a wooden frame, which commemorates the fallen members of the original St. John’s Church at Warren Street, and the other, made of marble, which commemorates the fallen members of Tenby Congregational Church who fell during the Great War. These men are also commemorated on the main town memorial. 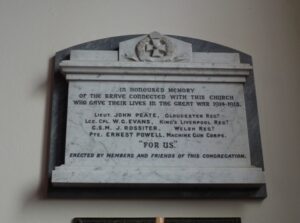 William George Evans, Lance Corporal, 381481, Kings Liverpool Regiment. William was born in Tenby, and also resided there when he enlisted into the army. He was posted to the 5th Battalion, King’s Liverpool Regiment, which had been in France since 22 February 1915, attached to 6 Brigade, 2nd Division. William probably joined the battalion in 1917, and would have fought at the Battle of Cambrai, where the Division was decimated during the German counter-attacks. In 1918 the Division moved to Festubert, and in April met with the ferocious onslaught of the German Offensive in Flanders. After the Battle of Estaires, the Division had made a stand that was to become famous, gaining the respect of even the German High Command. After a hard campaign in Flanders, the tide turned in favour of the Allies, and the Division took part in the final advance in Flanders. William was killed in action during this epic push, on 21 October 1918, and is buried at Ere Churchyard, Belgium. His is one of only two burials here. 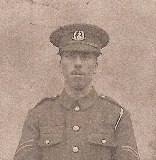 John Peate, Lieutenant, Gloucestershire Regiment. John was born at Llanbrynmair, Montgomery in 1889, the son of Margaret Peate. He was a teacher at Greenhill School, Tenby prior to the war, and was commissioned into the 3rd Battalion, Gloucestershire Regiment. John was posted into the 1st Battalion, Gloucestershire Regiment, which was attached to 3 Brigade, 1st Division, and joined the battalion in the summer of 1916. The Division was on the Somme, and fought during the opening of the Somme Offensive at the Battle of Albert, then at Bazentin, Pozières and Flers-Courcelette, which is probably where John was killed on 8 September 1916, aged 27. He has no known grave, and is commemorated on the Thiepval Memorial, France. 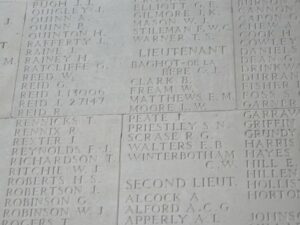 Ernest Powell, Private, 101168, Machine Gun Corps. Ernest was the son of George and Ann Powell, of 19, Culver Park, Tenby. He enlisted on 9 October 1914, and served throughout the war on home service with the Machine Gun Corps. Ernest married Lydia Leonora Maud Stevens at Brighton on 12 October 1917, before he posted to the Heavy Branch, Machine Gun Corps. He was taken ill before being sent to France, and hospitalised for a while with stomach problems. Ernest was discharged on 11 May 1918, and died on 2 May 1919, aged 39. He is buried in Tenby (St. Mary) Church Cemetery. Lydia died in 1934. 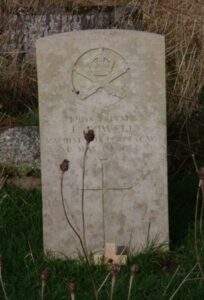 James Rossiter, Company Sergeant Major, 27475, Welsh Regiment. James was son of George and Mary Rossiter of Tenby, and the Husband of Mary Rossiter, of 2, Rocky Park, Tenby. He had served during the Boer War with the Imperial Yeomanry, and was discharged to the reserve in 1908. James rejoined the army at the outbreak of war, joining the 1st Battalion, Welsh Regiment. The battalion landed at Le Havre on 18 January 1915, attached to 84 Brigade, 28th Division. Upon arrival they moved to Ypres, and fought at the Battle of Second Ypres, where they suffered terrible casualties. In September 1915 they took part in the Battle of Loos, and on 24 November 1915 they embarked at Marseilles for Salonika, and arrived there on 25 November, remaining there for the duration of the war. James must have been wounded and returned home, as he died at home on 12 June 1918, aged 43, and is buried at Tenby (St. Mary) Church Cemetery. 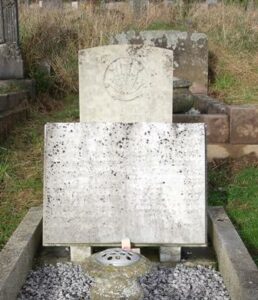 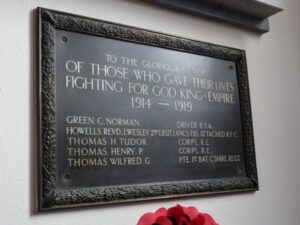 Cyril Norman Green, Driver, 122243, Royal Field Artillery. Cyril was the son of John and Bessie Rundle Green. He had resided at Mount Pleasant, Tenby for several years prior to the war, and had been educated at Greenhill School. Cyril was living at 7, Bridge Street, Haverfordwest when he enlisted into the Royal Field Artillery, and was posted to France at sometime in 1916, joining their 55th Division Ammunition Column, which was attached to the 55th (West Lancashire) Division. The Division had fought throughout the Somme offensive in 1916, before relieving the 29th Division in the Ypres salient in October 1916. It was destined to remain in this area for almost a year, stationed near Railway Wood. Cyril was wounded at Railway Wood, and evacuated to the Military Hospital at Boulogne, where he died of his wounds on 11 March 1917. He was 21 years old, and is buried at Boulogne Eastern Cemetery, France. 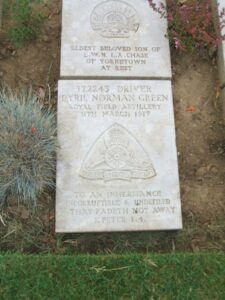 Reverend John Wesley Howells, Second Lieutenant, Lancashire Fusiliers. John was born on 26 October 1887, the son of William and Sarah Jane Howells, of Arch House, St. George Street, Tenby. He was educated at Tenby, before training at Westminster, becoming a Wesleyan Minister at Manchester prior to the war. John enlisted on 14 May 1915, and was commissioned in August that year into the 7th Battalion, Lancashire Fusiliers. The Battalion was formed in Salford in August, 1914, as part of the East Lancashire Division, and had been in Egypt since 25 September 1914, being landed on Gallipoli on 5 May 1915. John joined the Battalion when it had returned to Egypt from Gallipoli, but soon transferred to the Royal Flying Corps, training as an Observer, attached to 14 Squadron, RFC. On 23 July 1917, John was flying as Observer to Lieutenant R. N. Thomas, in their BE2e, when it suffered a direct hit by anti-aircraft fire, South-West of Gaza, Palestine. Both men were killed when the aeroplane crashed into the sea. Both John and his Pilot are commemorated on the Jerusalem Memorial, Israel.

Henry Percival Thomas, Sapper, 200442, Royal Engineers. Henry was born in 1891, the son of Herman and Eleanor Thomas, of 1, St. Julian Street, Tenby. He enlisted at Ashby-De-La-Zouch in September 1914 into the 1/5th Battalion, Leicester Regiment. He served with the battalion in France until 24 August 1916, when he was transferred into the Royal Engineers, and served in their I.W. & D. Section in Mesopotamia. Henry contracted sandfly fever in Mesopotamia, and died of septicaemia on 27 September 1917, aged 26. He is buried at Basra War Cemetery, Iraq.

Howell Tudor Thomas, Corporal, 108725, Royal Engineers. Howell was the son of William and Annie Thomas, of Tenby. He married Eva Mary Williams on 2 April 1907, and the couple resided at Ford Cottage, Edward Street, Tenby. Howell enlisted on 6 December 1915 into the Army Service Corps, but was immediately transferred to the Royal Engineers. Howell served for the remainder of the war with the 222nd Field Company, Royal Engineers. He remained in France after the armistice, and died of pneumonia on 31 January 1919 aged 37. Howell is buried at Janval Cemetery, Dieppe, France. 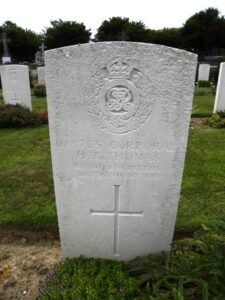 Wilfred George Thomas, Private, 53649, Cheshire Regiment. Wilfred was the son of Frederick and Laura Helen Thomas, of Farnham House, South Cliff Street, Tenby. He enlisted at Tenby on 9 February 1917 into the Training Reserve, and was posted to France on 8 April 1918, joining the 1st Battalion, Cheshire Regiment, which was attached to 15 Brigade, 5th Division. The division had just returned to France from Italy, and in April 1918 were hurriedly returned to France, where they moved to Flanders to help in the desperate defence there. Wilfred was killed in action on 3 July 1918, aged just 18. He is buried in Tannay British Cemetery, Thiennes, France. 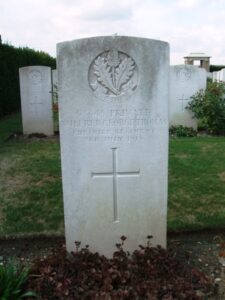