During World War Two, Tenby was home to an RAF Air Sea Rescue Base, No. 48, which was based in what is now the Tenby Harbourmaster’s Office.

The Royal Air Force Marine Branch was formed in 1918, following the merging of the Royal Flying Corps (RFC), and the Royal Naval Air Service (RNAS) to form the Royal Air Force (RAF). The RNAS had built up a number of rescue launches and seaplanes both to assist in the defence of Britain and to rescue airmen who had downed in the waters surrounding our coasts.

Between the wars the RAF maintained the unit and also began to commission purpose designed high speed rescue craft, such as the ST 200, capable of speeds up to 29 knots.

During the late 1930’s the RAF 100 class High Speed Launch (HSL) came into service, and was capable of a maximum speed of 35 knots, and this was to be the mainstay of the service until the improved Type Two 6HSL, nicknamed the ‘Whaleback’ came into service. 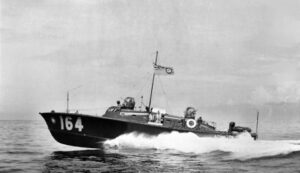 Following the outbreak of war six RAF Air Sea Rescue Bases were established around the Welsh coast. No. 48 Air Sea Rescue Base was formed at Tenby, to rescue aircrew who had baled out in the Western Approaches. Tenby was an ideal location due to the relatively large number of airfields operating in Pembrokeshire. The unit also played a support role in the D-Day landings of 6 June 1944.

It also took part in a ‘Top Secret’ operation at Tenby in July/August 1944, when trials of Thames lighters took place, to see if they were suitable for use in a future invasion of France. This was to be the first major exercise in trialling these lighters, when 36 lighters in three flotillas, together with 36 coasters and other forces, took place at Tenby, in Exercise ‘Jantzen’.

The unit served with distinction throughout the war, but reportedly lost two boats, complete with her crews, some 18 men altogether.

To commemorate these crewmen, members of No. 48 erected a plaque on the harbour wall at Tenby on 13 June 1993. This plaque has recently been installed inside St. Julian’s Church at Tenby, but a new plaque has also been commissioned and fitted outside the Harbourmaster’s Office. 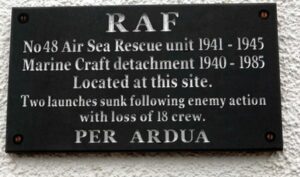 There appears to be no record of who these casualties were. No mention is made of 48 Air Sea Rescue Unit within the archives of the Commonwealth War Graves Commission, so the identity of these men is currently unknown. Looking at known casualties from other units based in the UK, some of the men served with 969 Balloon Squadron, while the majority have no squadron listed.

The inscription on the plaque reads:

No.48 Airsea Rescue Unit 1941-1945 Marine Craft Detachment 1940-1985. Erected by RAFA Tenby to commemorate the establishment of the RAF Marine Craft Service in Tenby Harbour and the relationship which existed over the years 1941-1985 with the people, of Tenby. Two launches were sunk through enemy action and the crew of a Sunderland were rescued by HSL 144, captained by Fl.Lt. W. E. Probert.

Flying Officer William Probert, together with Flying Officer Ambler, were two of the Tenby Skippers chosen to take their launches to Plymouth. They had been equipped with the brand new Thornycroft High Speed Launches, which were heavily armed. Their mission was to rescue downed airmen and potentially paratroopers, if their aircraft or gliders were brought down making the crossing over the Channel to occupied France. They had also been briefed to use their searchlights to help create a pathway for the assaulting aircraft to the coast of Normandy.