Tegryn is a small village, situated about nine miles SSE of Cardigan, near Crymych, on the upper slopes of Frenni Fawr, the third highest peak in the Preseli Mountains. The men of the village who fell during both World Wars are commemorated on two memorials; The men who fell during the Great War are commemorated on a marble pillar, which is located in the grounds of Capel Llwynrhwrdd, whilst the man who died during World War Two is commemorated on a brass plaque within Tegryn School. Many thanks to Mike Berrell for the photographs of the memorials. 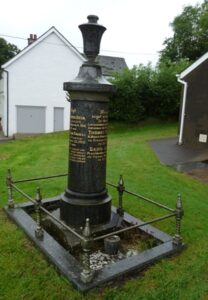 John Davies, Private, 201439, Welsh Regiment. John was the son of James Davies, of Frondeg, Glogue. He enlisted at Carmarthen into the 1/4th Battalion, Welsh regiment during August, 1914, and the Battalion later joined 159 Brigade, 53rd (Welsh) Division. The Division moved to the Mediterranean, sailing from Devonport in July 1915, and arrived at Mudros by 5 August 1915. From here they moved to Gallipoli, landing on 8 August 1915. Here they immediately faced the chaotic leadership that was to lead to the ultimate failure of the campaign, and spent the next few days in isolated pockets, fighting against a Turkish counter-attack during the Battle of Sari Bair, and then at the Attack on Scimitar Hill. The Division remained here throughout the coming months, and suffered severe losses in manpower strength during the great November 1915 blizzard on Gallipoli, when its total strength was reduced to less than that of a full-strength Brigade. On 11 December 1915 the Division was evacuated to Mudros, and by 23 December 1915 were moved to Egypt. They remained on the Suez Canal Defences for the next twelve months, and in early 1917 moved into Palestine, where they remained for the duration of the war, fighting at the Battles of Gaza, and successfully capturing Jerusalem. John was killed during the First Battle of Gaza, on 26 March 1917. He was just 21 years old. He has no known grave, and is remembered on the Jerusalem Memorial, Israel. 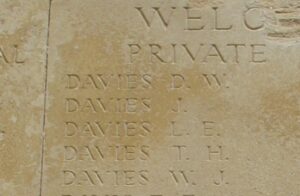 Thomas Evans, Corporal, 432900, Canadian Infantry. Thomas was born on 18 November 1877, the son of John and Mary Evans, of Tegryn. He had lived in London before the war, where he was a Policeman with the Metropolitan Police. Thomas emigrated to Canada prior to the war, and enlisted there at Edson on 21 January 1915 into the Canadian Infantry. Thomas sailed for England where he joined the 49th Battalion (Edmonton), which was attached to the 7th Canadian Brigade, 3rd Canadian Division. The Division formed in France during December 1915. They moved to positions south of Ypres, and fought there in June 1916 at Mount Sorrel. They then moved south, taking up positions on the Somme during September 1916 and they fought there at the Battle of Flers-Courcelette, at Thiepval, Le Transloy and on the Ancre. In April the Division fought during the Arras Offensive, at the Battle of Vimy Ridge, then during the Third Battle of the Scarpe and the Battle of Hill 70 near Loos, before moving back to Ypres. They fought here during Third Ypres, at the Second Battle of Passchendaele, where they successfully managed to capture Passchendaele Village. Thomas was killed in action here on 30 October 1917, aged 40. He is buried at Passchendaele New British Cemetery, Belgium. 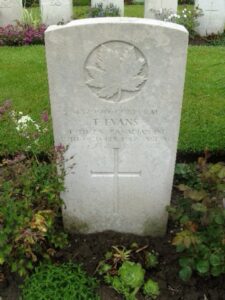 David James, MM, Lance Corporal, 613, Welsh Guards. David was the son of David and Ann James, of 6, Glogue Terrace, Glogue. He enlisted at Pentre into the 1st Battalion, Welsh Guards, which had been formed by the Royal Warrant of 26 February 1915, and moved to France attached to the 3rd Guards Brigade, Guards Division. The Division was formed in France in August 1915, of the various Guards units that had been with other Divisions. It remained on the Western Front throughout the war and saw its first major action during the Battle of Loos on 25 September 1915, remaining in the area during the coming months, where they also fought in the subsequent Action of Hohenzollern Redoubt. In July 1916 the Division moved to the Somme, where they fought at the Battle of Flers-Courcelette, and then at the Battle of Morval, capturing Lesboeufs Village. David won his Military Medal for Bravery in the Field during the action at the Somme, but was sadly killed in action there on 16 September 1916. David was 23 years old, and is remembered on the Thiepval Memorial, France. 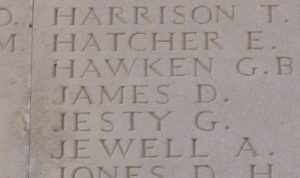 David Morris Owen, Private, 202676, Welsh Regiment. David was born at Clydey, near Llanfyrnach, the son of James and Anne Owen, of Glasfryn, Clydey. He enlisted at Llanelli into the army, and was posted to the 9th Battalion, Welsh Regiment, which was attached to 58 Brigade, 19th (Western) Division. The Division assembled around Bulford during September 1914, and crossed to France during July 1915, moving to positions near Loos. The Division fought during the opening attack of the Battle of Loos, and then moved to the Somme, where they took part in the second wave of the attack on Ovillers-La Boiselle on 1 July 1916, capturing the village at heavy cost, and fought through the Somme Battles of Pozieres and the Ancre in 1916. They then moved North to Ypres, taking part in the Battle of Messines, and fought on the Menin Road and at Polygon Wood, before moving up to Broodseinde, Poelcapelle and Passchendaele Village itself. The Division was moved south to the Arras area over the winter of 1917/1918. David took ill here and sadly died on 4 March 1918, aged 23. He is buried at Rocquigny-Equancourt Road British Cemetery, Manancourt, France. 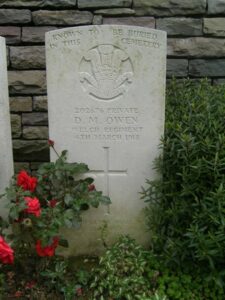 Tommy Thomas, Private, 1003, Australian Imperial Force. Tommy was born at Llanfyrnach in 1889, the son of Thomas and Mary Thomas. Thomas and Mary later moved to 1, Bridge Street, Port Talbot, while Tommy went to live at North Gate Terrace, Cardigan, where he worked as a carpenter. Tommy emigrated to Australia prior to the war, and enlisted at Queensland on 17 June 1915 into the 25th Battalion, Australian Infantry. The 25th Battalion was raised at Enoggera in Queensland in March 1915 as part of the 7th Brigade, leaving Australia in early July 1915. It trained in Egypt during August, and in September 1915 landed at Gallipoli, where it reinforced the depleted New Zealand and Australian Division. The 25th Battalion left the peninsular on 18 December 1915. After further training in Egypt, the 25th Battalion proceeded to France, landing on 19 March 1916, where it became attached to the 2nd Division. It took part in its first major battle at Pozières between 25 July and 7 August in the course of which it suffered 785 casualties. Tommy was wounded on 31 August, suffering multiple gunshot wounds, and was evacuated to the 1st Australian General Hospital at Rouen. He died of his wounds on 15 September 1916, aged 28, and is buried at St. Sever Cemetery, Rouen, France. 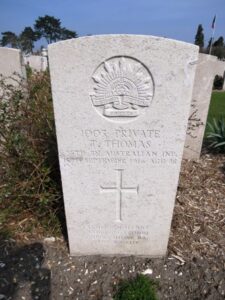 William John Thomas, Private, 75173, Royal Army Medical Corps. William was the son of Mary Thomas, of Ponthirwain, Llechryd. He resided with his wife, Martha Thomas, at 12, Glogue Terrace, Glogue, prior to the war, and enlisted at Cardigan into the Royal Army Medical Corps. William was posted to France, probably early in 1917, where he joined the 54th Field Ambulance, Royal Army Medical Corps, which was attached to the 18th (Eastern) Division. In March 1917 the Division followed the German Retreat to the Hindenburg Line, and in May took part in the Third Battle of the Scarpe, which was part of the Arras Offensive. Later that year the Division fought at Third Ypres. In 1918 the Division were stationed south of the Somme, and were one of the Divisions hit there by the German Spring Offensive, which was launched on 21 March 1918. They fought at the Battle of St Quentin, and suffered terrible casualties, and then took part in the Battle of the Avre and the Actions of Villers-Brettoneux. On 8 August 1918 they formed part of the force which attacked the German positions around Villers Brettoneux, south of the Somme Valley, during the Battle of Amiens, and then took part in the Battle of Albert, which began the great push by the Allies which ended the war. William was killed in action during fighting at Franvillers on 22 August 1918. He was 24 years old, and is buried at Franvillers Communal Cemetery Extension, France. 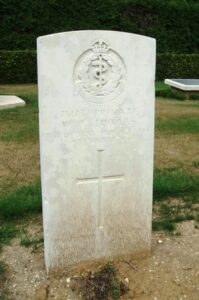 Benjamin Edwin Nicholas, Leading Aircraftman, 526309, Royal Air Force. Benjamin was the son of William Nicholas, and of Sarah Nicholas, of Tegryn, and served with 228 Squadron, Royal Air Force. The Squadron was a flying boat unit, which carried out anti-submarine and shipping patrols in the Mediterranean from its base at Kalafrana in Malta from October 1940. Benjamin was killed when his Short Sunderland N9020/W was lost over the Mediterranean on 1 November 1940 after being shot down by two Italian fighters. Benjamin was 24 years old, and is commemorated on the Alamein Memorial, Egypt.