Talbenny is situated about six miles west of Haverfordwest, on the south side of St. Bride’s bay. The men of the area who fell during the Great War are commemorated on a marble plaque, inside St. Mary’s Church. The Church also houses a Memorial to the men of R.A.F. Talbenny, who were killed whilst operating from the base during World War Two. These men are commemorated on a separate page. 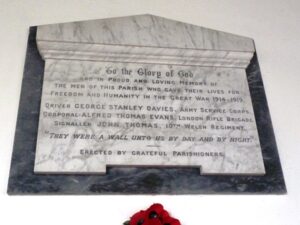 George Stanley Davies, Driver, T4/144611, Royal Army Service Corps. George was born at Trewern, Newport, the son of John Howell and Mary Davies. The family later resided at Howelston, Little Haven. George enlisted at Haverfordwest into the Army Service Corps, and was posted to the 1st Division Indian Cavalry in France. George became ill towards the end of his first winter in France, and died of pneumonia in hospital on 18 April 1916, aged 20. He is buried in Le Treport Military Cemetery, France. 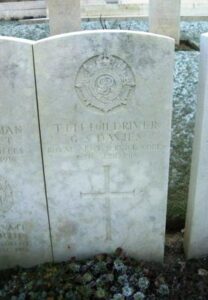 Alfred Thomas Evans, Lance Corporal, S/11676, Rifle Brigade. Alfred was born in Little Haven in 1894, the son of Thomas and Margaret Evans. He married Gertrude Annie Richards in 1914, and they set up home at 81, Albert Town, Portfield, Haverfordwest. Alfred enlisted at Haverfordwest into the 1st Battalion, Rifle Brigade, which was attached to 11 Brigade, 4th Division. One of the first Divisions to move to France, arriving just in time to join the hard-pressed Divisions of II Corps at The Battle of Le Cateau. They then took part in the epic retreat to the Marne, where the German Offensive was halted, and in the advance to the Aisne. The Division was then moved north to Flanders, and took part in the Battle of Messines, where Units of 4th Division took part in the famous Christmas Truce while they were still in this area, in trenches near Ploegsteert Wood. In 1915 the Division fought at the Second Battle of Ypres. Alfred joined the battalion here as a reinforcement on 13 July 1915. In the summer of 1916, the Division was on the Somme, where they were one of the first Divisions into battle, going over the top on 1 July 1916. Alfred was one of 20,000 men who were killed in the first few hours of the Battle of the Somme that day. He was 22 years old, and is buried at Serre Road Cemetery, No. 2, France. 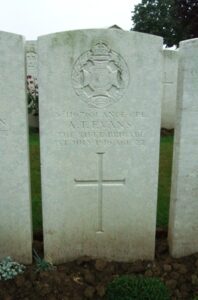 John Thomas, Private, 16284, Welsh Regiment. John was born at Dale in 1896, the son of Mark and Mary Thomas, of Wathwick. He worked as a Cowman for the Gibby family at Talbenny prior to the war, and enlisted at Haverfordwest into the 10th Battalion, Welsh Regiment. The battalion was raised at Porthcawl before moving to Rhyl, and in the summer of 1915 moved to Winchester as part of 114 Brigade, 38th (Welsh) Division. The Division had landed in France during December 1915 and had spent their first winter in the trenches near Armentieres. In June they marched south to the Somme, where they were tasked with the capture of Mametz Wood. The division suffered terrible casualties during its first unsuccessful attack on 7 July 1916, and its second attack between 10 to 12 July, which cleared the Germans from the wood. The battered Division was taken out of the line, and moved to Ypres to rebuild, taking up positions along the Boesinghe Canal. On 1 May 1917 the 10th Welsh moved into the line to relieve the 10th SWB. After ten days in the line, on 11 May 1917, the battalion was moving out of the line to rest, when John was killed in action by shellfire. He was 20 years old, and is buried at Ferme-Olivier Cemetery, Belgium. 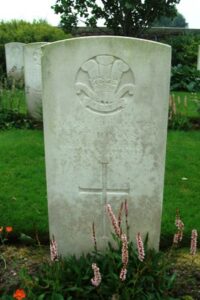 Albert Warlow, Sapper, 19902, Royal Engineers. Albert was born at Talbenny in 1886, the son of John and Mary Warlow. The family later moved to Chepstow, Monmouth. He enlisted at Merthyr Tydfil into the Royal Engineers, and served with the 56th Field Company, attached to the 3rd Division. One of the first Divisions to move to France, they remained on the Western Front throughout the war, and fought during the opening Battle of Mons, and in the epic retreat, from the Rearguard Action of Solesmes, through the Battle of Le Cateau, and down to the Marne, where the German Offensive was stopped. They followed the German withdrawal to the Hindenburg Line, where they met them in battle, and stopped the advance on Paris. The Division then moved north to Flanders, and took part in the Battle of La Bassée, and at the Battle of Messines, which were a prelude to the First Battle of Ypres. Albert was taken ill here, and died on 25 November 1914. He was 28 years old, and is buried in Cement House Cemetery, Belgium. Albert is not commemorated on the Talbenny Memorial, although he is commemorated on remembered on the Belgian War Memorial of Maisières, near Mons where the famous Battle of Mons took place on 23 August 1914. 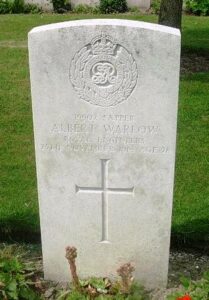 Unknown Sailor of the Great War 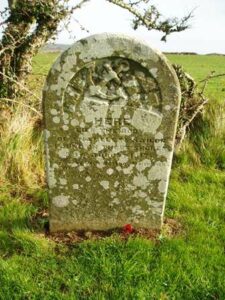 In one corner of Talbenny Churchyard is an undistinguished headstone which marks the grave of a sailor whose body was recovered from the sea on 29 August 1917. His burial caused great controversy at the time, as can be read below, from a letter sent to the Haverfordwest and Milford Telegraph by the then incumbent vicar, Reverend Woodman Dowding:

SIR,—in your issue of the 5th inst. a paragraph under the heading of “Little Haven Sensation” gave a highly coloured and distorted account of the burial of an unknown body at Talbenny Churchyard. Only the real facts can correct the gross misrepresentations that have been current in the district. The full story is as follows:—

It was late in the afternoon of Thursday, 30th August, that I first heard of a body being found on the shore. I immediately went to my locum tenens, the Rev. J. M. Williams, and asked him if he had heard anything of the burial of the body, as I had not. Finding that he had received no notice, I went to Haverfordwest on the following day (Friday) to find out from some responsible authority what the correct procedure should be. It was on my return home on Friday evening that I first heard that the interment had taken place. It was not pleasant to hear that the clergy had refused to bold a service over the body of a man who had given his life for his King and country.” I at once went to my locum tenens to find out what had really occurred. Then I interviewed the undertaker, Mr J. George, who admitted that not only had be buried the body without a certificate from the Registrar or Coroner, which the Rev. J. M. Williams had rightly demanded, but had also dug the grave without permission of the Churchwardens and myself. Further, no notice had been given to the clergy. The appearance of the coffin at the churchyard gate was the first intimation that this burial had been arranged. I may state here that so far as the parishioners being keenly interested in the burial of an unknown man “who had given his life for his King and country,” as a matter of fact the coffin was brought up on a cart and there were barely sufficient persons present to carry the body. I immediately reported the matter to the Registrar of deaths. The following is a copy of my letter, dated 1st September:—

Sir,—It is my duty to inform you of an irregularity which took place yesterday at Talbenny Churchyard. Mr J. George, jun., and some others buried the body of a sailor which was found on the rocks. He informed me that he did not have a certificate from the Coroner or any other authority. I received no notice that the funeral was to take place and only heard of the proceedings on my return home in the evening. To this letter I received the reply below, dated September 3rd;-

Re the burial of an unknown man at Talbenny on the 31st ulto. The Overseer of the Parish should have attended here to register the death previous to the burial as the Coroner bad decided not to held an inquest. The above letters contain the essential facts which completely exonerate my locum tenens. To conclude the story. Sharing the indignation of my locum tenens and parishioners that a man who had given his life for King and country” should be so treated—to put it bluntly: he was buried like a dog in a hole – I at once placarded Little Haven and Broad Haven with notices that I would hold a memorial service by the nameless grave on Sunday at 10.30 a.m. I regret to have to say it, but I personally did not observe that any of the persons who had had a hand in the irregular funeral on the preceding Friday, were present at this service. It was well attended, however, by visitors and a sprinkling of the parishioners. A collection was made in church to place a stone over the nameless grave, The full cost has been contributed- £2 15s. I have even had to return subscriptions which were sent without “canvassing,” that fatal failing of our religious and social institutions. This is where the incident stands. How it will terminate it is impossible to guess. That it cannot remain as it is goes without saying. The blame must be placed on the right backs. Decency and patriotism demand that the nameless dead cast upon our shores should be reverently and affectionately laid to rest. Public opinion has not treated my loyal and painstaking locum tenens fairly. I am confident that the full presentation of the facts will go far to rectify this. Certainly in this parish a complete revolution has taken place in opinion and feeling. The blame has been diverted from the Rev. J. M. Williams to other persons. Your unfortunate paragraph based on faulty evidence constrained me to send this full account. I believe your readers will appreciate fact rather than fiction because (1) It is true. (2) It is more sensational.

The identity of this man will never be known, but thanks to the efforts of Reverend Dowding, his grave is at least marked by a headstone.