St. Twynnell’s is a parish situated about four miles south-south-west of Pembroke, near the parishes of Castlemartin, Warren and Stackpole Elidor. The Parish Church is dedicated to St Gwynog and affords a pleasant view over the adjoining village. Inside the Church is a fine stained glass window, which is dedicated to the memory of two parishioners who lost their lives during the Great War. 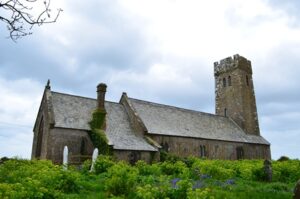 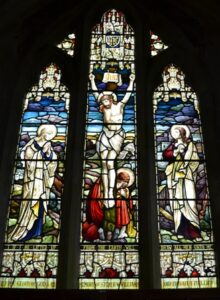 Thomas Phillips, Private, 139924, Machine Gun Corps. Thomas was the son of Pearce and Mary Phillips, of The Park, St. Twynnells, Pembroke. He enlisted at Pembroke into the Army, and was posted to the Monmouth Regiment, with the service number 229365. After receiving his training, Thomas was posted to the Machine Gun Corps, and joined their 38th Battalion, which was attached to the 38th (Welsh) Division. The Division had been in France since December 1915 and had fought during the Battle of the Somme in 1916 and at Pilckem Ridge in 1917. On 21 March 1918 the Germans launched an offensive on the Somme, and within days had pushed the British back over twenty miles. The 38th Division was sent to the Somme to hold the line north of Albert, and took the line around Aveluy Wood. Thomas was killed in action here during an operation to recapture Bouzincourt Ridge on 24 April 1918. He was 33 years old, and is buried at Bouzincourt Ridge Cemetery, France. 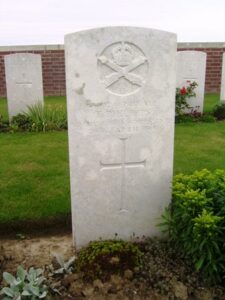 William Williams, Able Seaman, Wales Z/1412, Royal Naval Volunteer Reserve. William was born at St. Twynnell’s on 18 March 1886, the son of Jason and Hannah Williams. By 1901 the family was living at Nixon Terrace, Morriston, where William worked in the local Tinworks and had married Harriet. He was a Royal Naval Reservist and rejoined the colours at the outbreak of war. He served aboard the Devonshire-class armoured cruiser HMS Hampshire, which was attached to the Grand Fleet. Hampshire was present at the Battle of Jutland on 31 May 1916 and just days afterwards returned to Scapa Flow to take onboard Field Marshal Kitchener, to take him to a conference in Russia. On 5 June Hampshire struck a German mine whilst steaming past Orkney and sank with the loss of 650 men, including Lord Kitchener and his staff. William’s body was one of a number recovered from the sea, and the 30 year old was buried in Lyness Royal Naval Cemetery, Scotland. 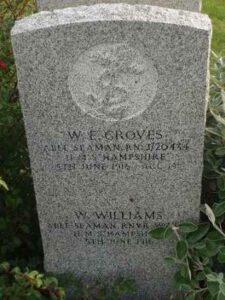