St. Florence is a peaceful village, situated three miles inland from Tenby on the road towards Carew Castle. The village is named after Saint Florencius, and has an interesting 13th Century Church, dedicated to him. On the edge of the village are three of Pembrokeshires biggest attractions, Manor House Wildlife Park, Heatherton’s and The Dinosaur Park. The War Memorial is sited within the churchyard, and commemorates the men of the village who died in both world wars. Many thanks to Les Nixon for his photographs of the War Memorial, and of the grave of Frederick Johns, who is buried there. 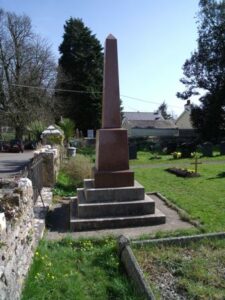 Harold Berkeley Beynon, Private, 33181, Hampshire Regiment. Harold was the son of Thomas and Laura Annie Beynon, of Holloway, Penally. He later resided at St. Johns Hill, Tenby. Harold served with the 10th Battalion, Hampshire Regiment, which was formed at Winchester in August 1914. The Battalion then became attached to 29 Brigade, 10th Division, and on 7 July 1915 sailed from Liverpool, arriving at Mudros 26 July 1915. The Battalion landed on Gallipoli on 6 August 1915, and fought there for a month before being sent to Salonika, where it joined 82 Brigade, 27th Division. Harold became ill with malaria while in Salonika and returned home for treatment. His service papers show that he was discharged in 1919 due to malaria. Sadly Harold died of malaria soon after, in June 1919, aged 21. Harold’s grave has been found at St. Florence Churchyard, and he has recently (January 2012) been accepted for commemoration by the CWGC, who will be adding his name to the Brookwood (1914-1918) Memorial. Harold is not commemorated on the St Florence War Memorial, but is commemorated on a plaque within St Florence Church. 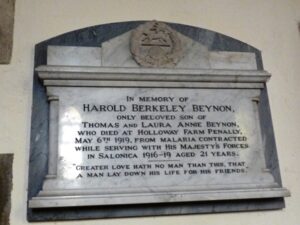 Theophilus John Beynon, Gunner, 27394, Royal Field Artillery. Theophilus was the Grandson of Evan Beynon, and the son of John and Amy Beynon, of St. Florence. He had been born in London, and was the husband of Gertrude Lizzie Beynon, of 11, Kemble Road, Forest Hill, London. Theophilus enlisted at London into the Army, and was posted to the Royal Field Artillery. After training, he was posted to their 86th Trench Mortar Battery. The trench mortar crews were responsible for firing mortars, of three differing calibres, to offer close support to troops. Theophilus was killed near Loos on 26 May 1917, during the Battle of Arras. He was 37 years old, and is buried at Philosphe British Cemetery, Mazingarbe. 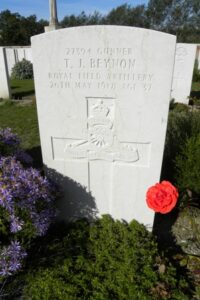 Albert Arthur Hurlow, Private, 68869, Royal Welsh Fusiliers. Albert was the son of John and Rhoda Hurlow, of St. Florence. He had initially served with the Pembroke Yeomanry, but was posted as part of a batch of reinforcements to the 11th Battalion, Royal Welsh Fusiliers. The battalion formed part of 67 Brigade, 22nd Division, which crossed to France in early September 1915, with all units being concentrated near Flesselles by the 9th of the month. However it’s stay in France was to be very short, as on 27 October 1915 the Division, having been moved by train to Marseilles, began to embark for Salonika. It completed concentration there in November, although the final artillery units were still coming in as late as 13 December 1915. It remained in the theatre for the rest of the war, taking part in the Retreat from Serbia during December, 1915. Between 10 to 18 August 1916 they fought at the battle of Horseshoe Hill, then between 13 to 14 September 1916 at the battle of Machukovo. Albert was killed in Salonika on 19 February 1917. He was 24 years old, and is buried at Karasouli Military Cemetery, Greece. 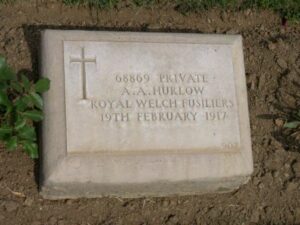 David James, Petty Officer, 183045, Royal Navy. David was born on 25 October 1878, the son of Hannah James, of St. Florence. David had enlisted prior to the war, and served in the Royal Navy, aboard HMS Kennet, a River Class Destroyer. She was stationed at Tsingtau, China at the opening of hostilities, and on 22 August 1914 was involved in a battle with a German ship. David was one of three men killed that day aboard Kennet. He was 35 years old, and is commemorated on the Plymouth Naval Memorial, England. 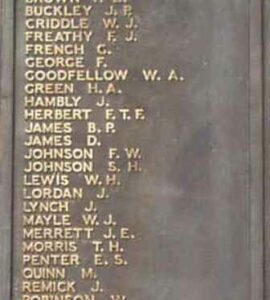 Hugh Davies John, Gunner, 3123, Australian Field Artillery. Hugh was the son of William Davies John and Sarah Catherine John, of Cresselly Shop and had been raised with an uncle at St. Florence. He had migrated to Australia prior to 1914, where he worked as a Farmer. By the summer of 1915 the Australian Imperial Force was making a name for itself during the fighting at Gallipoli. Many young Australians flocked to join the AIF, to take part in this great adventure that the propaganda had promised them, and so on 25 June 1915 Hugh enlisted at Blackboy Hill into the Australian Infantry, after being turned down from the Light Horse. After training, Hugh was posted to the 10th Reinforcements for the 16th Battalion, AIF, and embarked at Fremantle aboard HMT Themistocles on 13 October 1915 bound for Egypt. Early in 1916 the Australian battalions that had fought on Gallipoli were divided up to double the size of the AIF, with half the men going to the new battalions, and the positions being taken up by reinforcements. As a result, Hugh was posted to the 48th Battalion, AIF. His service papers then show a long history of illness, with several spells in hospitals in England over the coming months. In June 1917 he was posted to the 7th Field Artillery Battery, Australian Field Artillery, and in August was shot in the buttocks while fighting at Ypres. Again Hugh was hospitalised, and it was not until February 1918 that he was back in France, but he was soon in hospital ill again. Yet again Hugh returned to action, but was wounded for a second time during October 1918, during the fighting around the Hindenburg Line, and returned home for treatment at the Red Cross Hospital, Sittingbourne. Sadly Hugh too ill here and died of pneumonia on 30 October 1918. He was 26 years old, and was brought home for burial at Minwear (St. Womar) Churchyard, Wales. 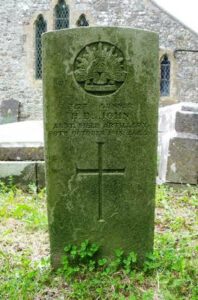 Thomas James Owen, Leading Stoker, 310044, Royal Navy. Thomas was born on 1 March 1888, the son of William Llewellyn Pridy Owen and Emma Owen, of Coppybush Farm, St. Florence. He enlisted into the Royal Navy prior to the war, and served aboard HMS Invincible. Invincible was the first battlecruiser to be built. She took part in the Battle of Heligoland Bight early in the war, then in the Battle of the Falkland Islands, when Invincible and her sister Inflexible sank the armoured cruisers Scharnhorst and Gneisenau. She was the flagship of the 3rd Battlecruiser Squadron during the Battle of Jutland. The squadron had been detached from Admiral Beatty’s Battlecruiser Fleet a few days before the battle for gunnery practice with the Grand Fleet and acted as its heavy scouting force during the battle. She was destroyed by a magazine explosion during the battle after ‘Q’ turret was penetrated. Over 1,026 men were killed in the sinking, including Thomas. He was 27 years old, and is commemorated alongside his shipmates on the Plymouth Naval Memorial, Devon.

William James Rossiter, Gunner, 302024, Royal Garrison Artillery. William was born on 20 August 1894, the son of Emma Rossiter, of Fern Cottage, St. Florence. William served with the Royal Garrison Artillery, in the 10th Highland Mountain Brigade. William fought in the Palestinian Campaign, along with many other Pembrokeshire men, and died near the end of the war of malignant malaria on 25 October 1918, aged 24. He is buried at Haifa War Cemetery, Israel. 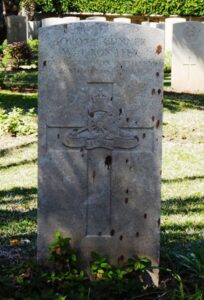 John Isaac Thomas, Private, 34215, Loyal North Lancashire Regiment. John was born in 1879, the son of Mary Thomas, of St. Florence. He was living at New Malden, Surrey by 1900, and married Agnes Sarah Gadd that year. By 1911 the family had moved to Wooton-Under-Edge, Gloucestershire, and had eight children. John enlisted at Dursley into the Gloucestershire Regiment, but was later transferred into the 1st Battalion, Loyal North Lancashire Regiment, which was part of 2 Brigade, 1st Division. The Division had been one of the first to arrive in France, fighting at the Battle of Mons, and taking part in the retreat to the Marne, where the Germans were stopped. They then fought at the Aisne, and at Chivy, before being moved North to Ypres. Here they fought at the First Battle of Ypres, where they again stopped the German Offensive, before wintering in Flanders. The following year saw them in action again at the Battle of Aubers, before moving South to Loos, where they fought during the Battle of Loos, and the action at the Hohenzollern redoubt. Again they were required for a major offensive, moving South to the Somme, where they fought during the opening of the Somme Offensive at the Battle of Albert, then at Bazentin, Pozieres, Flers-Courcelette and Morval. They followed the German retreat to the Hindenburg Line in early 1917, and were then briefed for an operation on the Flanders Coast, and moved there during the summer of 1917. While training on the coast, the Battle of Third Ypres had stalled in the mire, and the Division were recalled to Ypres, where they fought at the Second Battle of Passchendaele. John was killed here on 10 July 1917, aged 38. His is one of the few named graves in Sanctuary Wood Cemetery, on Hill 62, Belgium. 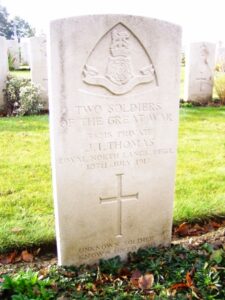 Francis Alfred Hinley, Gunner, 843617, Royal Artillery. Francis was the son of Francis Edgar and Florence Maud Hinley, of Greenwich. He married Vera Jones, of St. Florence, in 1937. Francis served with 9 Coast Regiment, Royal Artillery. The regiment was based in Singapore when the garrison was attacked by the Japanese in December 1941. After the surrender of the garrison, Francis was taken into captivity and held at Changi Jail. He was transported to Japan aboard one of the infamous Hell-Ships, and died in captivity on 18 March 1945, aged 31. Francis is buried at Yokohama War Cemetery, Japan. Vera never remarried, and died in Pembrokeshire in 1994. Francis is not commemorated at St. Florence. 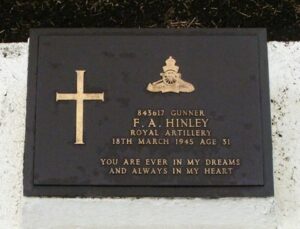 Frederick Thomas Johns, Corporal, 4197621, Royal Welch Fusiliers. Frederick was the son of Thomas and Amelia Johns, of St. Florence. Very little is known of him, but he served with the 7th Battalion, Royal Welch Fusiliers. This was a Territorial Battalion, which formed part of the 53rd (Welsh) Division. They were on garrison duties in Kent when Frederick died on 19 August 1942, aged 23. He is buried at St. Florence, at St. Florencius Churchyard.

George Frederick Methuen Roblin, Stoker 2nd Class, D/KX 135253, Royal Navy. George was born on 10 May 1923, the son of Richard and Alice Maud Roblin, of Rising Sun, St. Florence. He served in the Royal Navy, aboard HMS Matabele, a Tribal Class Destroyer, which had been commissioned in January 1939. Matabele was used in patrol work, looking out for German shipping, and also for U-Boats. In January 1942 she formed the screen, with HMS Somali, for the cruiser HMS Trinidad on Convoy PQ-8 from Iceland to Murmansk. The convoy departed on 11 January, and came under torpedo attack on 16 January. On 17 January Matabele was hit by a torpedo from U-454 and sank almost immediately. Only two out her complement of 238 survived. Many who were able to leave the stricken ship succumbed in the ice-cold water before rescue was possible. The two survivors were picked up by the minesweeper HMS Harrier. George was among the men lost that day. He was just 18 years old, and is commemorated on the Plymouth Naval Memorial, England. 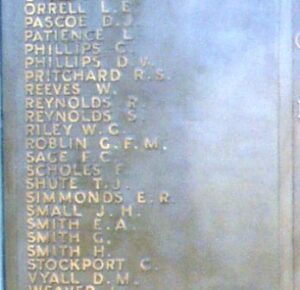 William John Rossiter, Gunner, 1426078, Royal Artillery. William was the son of William and Rose Rossiter, of Sheep Walks, St. Florence. He served in the Royal Artillery, with 68 Medium Regiment. The Regiment was sent to High Wycombe after the retreat from Dunkirk, before embarking for Eritrea in September 1940. Very little is presently known of William’s service, but he was posted to Crete, where he killed during the German Airborne invasion of the Island on 28 May 1941. William was 37 years old, and is commemorated on the Athens Memorial, Greece. His father William had been killed during WW1.