Whitesands Bay, or Porth Mawr, is situated on the St David’s Peninsula, about two miles west of the city of St. Davids and about one mile south of St Davids Head. The area to the north east of the bay is dominated by a large rocky outcrop known as Carn Llidi.

At around 16.15 on 4 June 1943, a Martin B26C Marauder, of the 335th Bomb Group, USAAF, which had become lost in cloud whilst flying from Morocco for RAF St Eval, in Cornwall, crashed into Carn Llidi, killing all her crew of four. 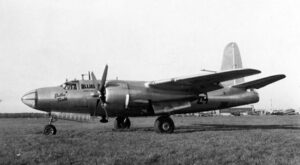 The men killed in the crash were:

Lieutenant Robertson, of Fisher County, Texas, was buried at the American Military Cemetery at Cambridge, while the three other airmen were returned to the US for burial.

In 1995 the Pembrokeshire Aviation Group unveiled a memorial on the Whitesands road, at Emlych Farm, to commemorate the 50th anniversary of the crash of the Marauder. The memorial incorporates one of the twisted propeller blades from the wreck. 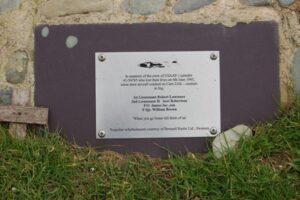