Spittal is a village situated about halfway between Haverfordwest and Fishguard, near the village of Wolf’s Castle. Its name is a corruption of the word Hospital, as the village was once the site of an ancient hospitium, which was tied to the Cathedral of St David’s. There are several memorials inside St. Mary’s Church, which commemorate the local men who died during the Great War, including a fine stained glass window, erected by the widows of CSM Edwin Jenkins and Lieutenant Hugh Williams. Many thanks to Mike Berrell for the photographs of the memorials. 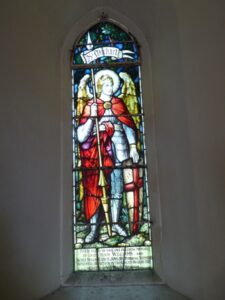 Sidney Charles Harris, Corporal, 26735, King’s Liverpool Regiment. Sidney was the son of Giles and Harriet Harris, of Greenway House, Spittal. He enlisted at Haverfordwest into the army, and was posted to the King’s Liverpool Regiment. Sidney served in France with one of the regular battalions of the regiment from 24 July 1915, but sometime later transferred to the 6th Battalion, King’s Liverpool Regiment, which was attached to 165 Brigade, 55th (West Lancashire) Division. The Division moved to France during January 1916, and fought on the Somme that year. During 1917 it took part in the Third Battle of Ypres. The Division relieved 42nd Division in the front line at Givenchy on 15 February 1918, and faced numerous strong enemy raids in March. April was at first much quieter, but it was a lull before the storm, as the Germans launched another offensive here, with the Division taking part in the Battle of Estaires. Sidney was wounded during this tumultuous period, and died of his wounds on 15 May 1918. He was 25 years old, and is buried at Bagneux British Cemetery, Gezaincourt, France. 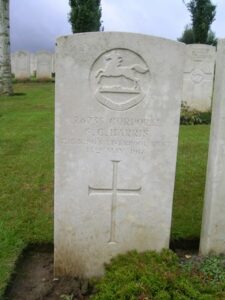 Archibald Bellairs Higgon, MID, Major, Royal Field Artillery. Archibald was born on 19 April 1880 at Scolton Hall, Spittal, the son of Captain John Donald George Higgon, and of Edith Emily Higgon (nee Thompson). He married Isobel Jane Denroche-Smith, of Balhary, Meigle, Perthshire at St. Ninian’s Episcopal Church, Balhary in 1913. Archibald served with the Royal Field Artillery, and had taken part in the Battles of Mons and Le Cateau in August 1914, being Mentioned in Despatched and awarded the French Legion of Honour, after taking command of his battery after all of his senior officers had been killed. He was later invalided home, suffering from rheumatism, but after recovering, took up duty at a training camp in England. In June 1915 Archibald embarked for the Dardanelles with ‘D’ Battery, 69th Howitzer Brigade, Royal Field Artillery. Archibald was killed in action at Gallipoli on 9 September 1915. He was 35 years old, and was buried in New Zealand No. 2 Outpost Cemetery, Gallipoli. The exact location of his grave could not be found after the war, so Archibald is commemorated in the cemetery by a Special Memorial. His brother John also fell. 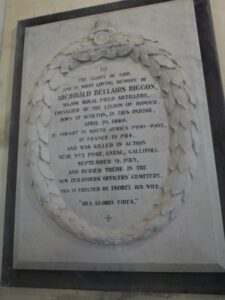 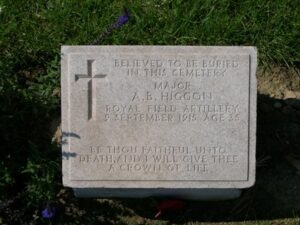 John Arthur Higgon, Major, Pembroke Yeomanry. John was born on 12 November 1873, the son of John Donald George Higgon of Scolton Manor. He married Lurline May Moses, daughter of Hon. Henry Moses, on 27 July 1900 at Hong Kong, while serving with the Royal Welch Fusiliers, and rose to the rank of Captain in the service of them. He became a Major with the Pembroke Yeomanry before the outbreak of war, and was posted to the Australian Imperial Force, which was stationed in Egypt, where it was doubling the size of its strength after having been evacuated from Gallipoli. He joined the AIF at Alexandria, and then embarked on HMAT Transylvania, bound for Marseilles, arriving on 23 June 1916. John then travelled to Northern France, where he took command of ‘A’ Company, 32nd Battalion, Australian Imperial Force, which was based in the Fromelles sector. He was with his new unit for less than a month, before it was sent into action at Fromelles on 19 July 1916. John was killed while leading his men out of the trenches at around 18.00 on 19 July 1916. He is reported to have been stood on the parapet, shouting ‘Come on Boys’, when a German bullet hit him between the eyes, and he fell dead, aged 42. His body was one of the few to be recovered from the battlefield, and John is now buried at Ration Farm Military Cemetery, France. His brother Archibald also fell. 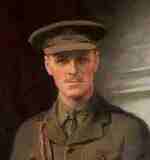 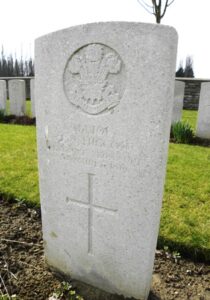 Edwin Jenkins, Company Sergeant Major, 320011, Welsh Regiment. Edwin was born in 1885, the son of George and Annie Jenkins, of Lower Haythog, Treffgarne. He enlisted at Haverfordwest into the Pembroke Yeomanry prior to the war, with the service number 133. The Pembroke Yeomanry formed at Tenby for war on 4 August 1914, before moving to the Norfolk coast as a Garrison unit. During March 1916 the battalion sailed for Egypt, where the South Wales Mounted Brigade became absorbed in 4th Dismounted Brigade. On 2 February 1917 the battalion merged with the 1/1st Glamorgan Yeomanry, and formed the 24th (Pembroke and Glamorgan Yeomanry) Battalion, Welsh Regiment in 231 Brigade, 74th Division. The Division then took part in the Palestinian campaign, and was present at the Battle of Gaza, and the capture of Jerusalem in December 1917. In May 1918 the Division moved to France, and took the line on the Lys. Later that year it moved to the Somme, and took part in the Battle of Epehy, where the 24th Welsh was tasked with the capture of the Hindenburg Outpost defences at Gillemont Farm on 21 September 1918. Edwin must have been one of the many casualties suffered by the battalion that day. He died of wounds on 26 September 1918, aged 33, and is buried in Honnechy British Cemetery, France. 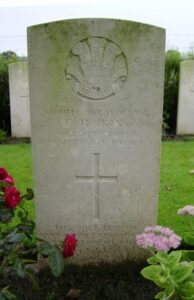 Edward George Perrin, Private, 11473, Welsh Regiment. Edward was from West Ham. He worked as a farm labourer at Spittal prior to the war and enlisted at Haverfordwest into the 2nd Battalion, Welsh Regiment. The battalion moved to France during August 1914 attached to 3 Brigade, 1st Division. The Division had been one of the first to arrive in France, fighting at the Battle of Mons, and taking part in the retreat to the Marne, where the Germans were stopped. They then fought at the Aisne, and at Chivy, before being moved north to Ypres. Here they fought at the First Battle of Ypres, where they again stopped the German Offensive, before wintering in Flanders. The following year saw them in action again at the Battle of Aubers. Edward was wounded here, and died on 13 May 1915, aged 19. He is buried in Bethune Town Cemetery, France. Edward is not commemorated locally. 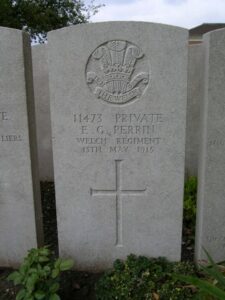 John Perry, Lance Corporal, 19121, Welsh Regiment. John was the son of Henry and Sarah Perry, of Spring Wells, Ambleston, Treffgarne. He enlisted at Haverfordwest into the Welsh Regiment, and was posted to France on 2 December 1915 with one of the battalions attached to the 38th (Welsh) Division. John was later transferred to the 9th Battalion, Welsh Regiment, which was attached to 58 Brigade, 19th (Western) Division. It is not known when John switched battalions, but whichever one he fought with, he would have fought on the Somme in 1916, either at Mametz Wood or at Ovillers-la-Boiselle. The 9th Welsh moved to Belgium in 1917, and took part in the Battle of Messines, before moving to Ypres, and fighting at the Third Battle of Ypres. John was killed in action here on 20 September 1917. He was 19 years old, and is commemorated on the Tyne Cot Memorial, Belgium. John is commemorated on his parents grave at Spittal churchyard. 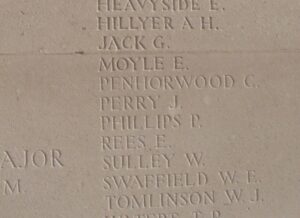 Hugh Williams, Second Lieutenant, Pembroke Yeomanry. Hugh was the son of John and Margaret Williams, of Landers Hook, Treffgarne, Pembrokeshire. He married prior to the war, and lived with his wife Anna Williams, at Old Gate House, Robeston Wathen. Hugh was commissioned into the Pembroke Yeomanry, and in April 1918 was posted to the 7th Battalion, King’s Shropshire Light Infantry, which was attached to 8 Brigade, 3rd Division. Hugh then saw his first action during the defensive period on the Lys, near Locon, when the battalion suffered heavy casualties from German gas shells. The battalion remained in this sector over the coming weeks, and it was here that Hugh was killed, whilst on patrol in the forward zone near Fouquereuil on 28 July 1918. Hugh was 29 years old, and is buried at Sandpits British Cemetery, Fouquereuil, France. 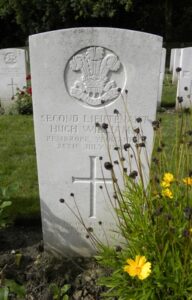 William Lloyd Lewis, Gunner, 912695, Royal Artillery. William was born in 1913, the son of John Lewis and Jane Lewis (nee Bushell), of Wood’s End, Spittal. He served with the Royal Artillery, as a gunner, and was attached to the 1/1 Maritime Regiment. He was posted aboard the Norwegian Merchant Steamer S.S. Blink as a gunner. During the afternoon of 10 February 1942, Blink was steaming in the Atlantic after having left Charleston with a cargo of phosphate, bound for Ipswich via Halifax, Nova Scotia, when she was attacked by the German submarine U-108, which fired two torpedoes at her. One failed to explode, while the second missed, so Blink steamed on, hoping to reach safety. The Germans hunted Blink during the remainder of the night and early the following morning managed to hit her with a torpedo, which failed to explode. The Germans quickly fired a second torpedo which exploded by the engine room, causing Blink to sink. Several members of the crew managed to escape on a lifeboat, but William, another gunner, and twenty two of her crew, were killed. William was 28 years old when he died during the sinking of Blink and is commemorated on the Portsmouth Naval Memorial, Hampshire.