Rosemarket is a small village, located in a picturesque area of South-West Pembrokeshire, four miles North East of Milford Haven. The village contains two War Memorials; the Parish Church of St. Ishmael’s holds an oak panel, with the names of six men who were killed in the Great War, plus those who served and returned. Beneath this is a smaller oak plaque, dedicated to the four men of the Parish who fell during the Second World War. The memorial Hall contains two marble plaques, which were formerly housed within Rosemarket Tabernacle Chapel, which commemorate the six men who fell during the Great War, and the four men of the Second World War. I have also added the details of several men connected to the Parish, who are not named on any of these memorials, as well as the men who survived the war, with as many details as I can presently find. Many thanks to Mr. David Wildman for kindly sending me several photographs of these memorials, for use on this page. 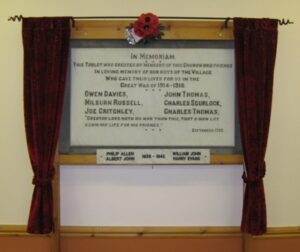 Joseph Critchley, Private, 17044, East Lancashire Regiment. Joseph was born at Oldham, Lancs. He resided at Barn Farm, Barn Lane, Rosemarket for several years prior to the war, as a live in farm-boy, who was regarded as one of the family by John and Mary Pawlett (nee Barrah). He enlisted at Haverfordwest into the army, and was posted to the 8th Battalion, East Lancashire Regiment, which was attached to 112 Brigade, 37th Division. Late in July 1915 the Division landed in France and concentrated near St Omer by 2 August 1915. They saw their first major action during the attack at Gommecourt during the first phase of the Battle of the Somme, before 111 and 112 Brigade were temporarily attached to the 34th Division. Joseph was killed in action after this move, on 15 July 1916. He is commemorated on the Thiepval Memorial, France. 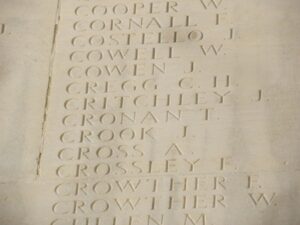 Owen Davies, Private, PS/9974, Royal Fusiliers. Owen was the son of James and Elizabeth Davies, of Rosemarket. He served his apprenticeship as a Grocer at Neyland, before moving to Abertillery prior to the war, returning to Haverfordwest to enlist into the army. Owen was posted to the 17th Battalion (Empire), Royal Fusiliers, which was attached to 5 Brigade, 2nd Division. Owen was posted to France early in 1916, and would have fought at the Battle of the Somme that summer. They followed the German retreat to the Hindenburg Line in early 1917, and it was there, during the Battle of Arras, that Owen was killed, on 28 April 1917, aged 27. He is commemorated on the Arras Memorial, France. 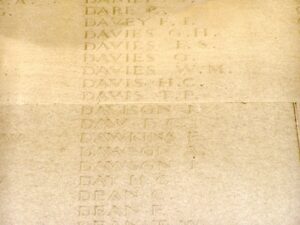 John John, Leading Seaman, Z/3430, Royal Naval Volunteer Reserve. John was born at Rosemarket on 2 July 1891. He served with the Royal Naval Volunteer Reserve, but was attached to the Mercantile Marine, serving aboard the SS Moidart. On 9 June 1918, Moidart was on voyage from Barry to Rouen with a cargo of coal when she was attacked and sunk by the German Submarine UC 77, with the loss of 15 lives. John is commemorated on the Plymouth Naval Memorial, Devon. John is not named on either of the Rosemarket Memorials. 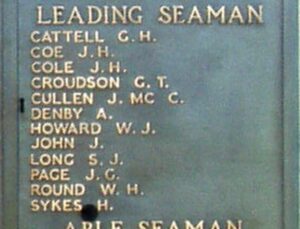 John Henry Nicholas, Private, 62877, Lancashire Fusiliers. John was the son of Oliver Nicholas, of Rosemarket. John and his wife Ann (nee Llewellyn) had moved to 8, Rutland Place, Newport, Monmouthshire prior to 1898, where they had five children, and Oliver worked as a Boilermaker. Ann died after 1908, and Oliver married Agnes Hughes in 1911. John enlisted at Newport into the army, and was posted to France at sometime during 1917, where he joined the 18th Battalion, Lancashire Fusiliers. The battalion was attached to 104 Brigade, 35th Division, and followed the German Retreat to the Hindenburg Line in March 1917. Later in the year they moved north to Ypres, and fought at the Second Battle of Passchendaele. By spring of 1918 they were back on the Somme, and fought at the First Battle of Bapaume, during the German Offensive. John was killed on the Somme on 14 June 1918. He was 19 years old, and is commemorated on the Pozières Memorial, France. John is not named on either of the Rosemarket Memorials. 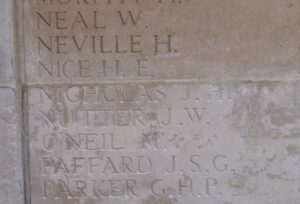 Melbourne George Russell, Private, 202940, South Lancashire Regiment. George was the son of George and Elizabeth Russell, of Rosemarket. He enlisted into the army, and was posted to the 2/4th Battalion, South Lancashire Regiment, which was attached to 172 Brigade, 57th (2nd West Lancs) Division. The Division moved to France during February 1917, and moved to positions near Ypres, where they took part in the Second Battle of Passchendaele. In 1918 they took part in the Battle of the Scarpe, and at the Battle of Drocourt-Queant. They fought on the Hindenburg Line during the Battle of the Canal du Nord, and at the Battle of Cambrai, where the Division helped capture Cambrai itself. George was wounded at Cambrai, and died of his wounds on 5 October 1918. He was 21 years old, and is buried at Sunken Road Cemetery, Boisleux-St-Marc, France. 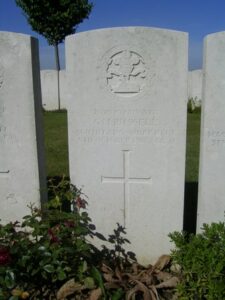 Richard Charles Scurlock, Private, 226554, Monmouthshire Regiment. Richard was born at Rosemarket, the son of Richard and Lettice Scurlock. He lived with his wife, Lily Scurlock, at 71 Charles Street, Abertysswg, Cardiff, and joined the Army at Newport, Monmouthshire, where he was posted to the 1st Battalion, Monmouth Regiment, which was the Pioneer Battalion to the 46th (North Midland) Division. The Division moved to France during February 1915, and saw its first action at the Hohenzollern Redoubt near Loos. The Division suffered large numbers of casualties during the attack, which was its first large-scale action. On 23 December 1915 the Division was ordered to proceed to Egypt, but after many of the units had reached Egypt, the order was countermanded and the units returned to France. Here the Division took part in the Attack on the Gommecourt Salient, which was a diversionary attack on 1 July 1916 intended to draw attention away from the main attack on the Somme, but the Division again suffered large numbers of casualties during the attack. They rested for several months at Arras, and at the end of 1916 took part in Operations on the Ancre. During March 1917 the Division followed the German Retreat to the Hindenburg Line, and then fought in the Battle of Arras, taking part in the Battle of Hill 70. They then moved to Ypres, which is where Richard was killed on 24 June 1917. He was 30 years old, and is buried at Vlamertinghe New Military Cemetery, Belgium. 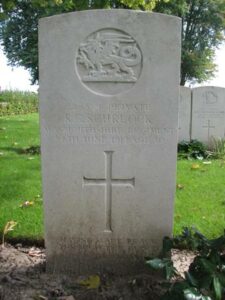 James Charles Thomas, Private, 85944, Machine Gun Corps. James was the son of James and Ann Thomas, of Tally Hoo Farm, Llangwm. He enlisted at Pembroke into the 4th Battalion, Welsh Regiment on 3 December 1915, being allotted the service number 6462. James was posted to France on 11 July 1917, joining the 235th Company, Machine Gun Corps, which was attached to the 12th (Eastern) Division. The Division had been in France since 31 May 1915, and had fought at the Battle of Loos in 1915, and at the Somme in 1916. James joined his new unit at Arras, where it was rebuilding after taking part in the Battles of Arras. The Division remained at Arras until taking part in the Battle of Cambrai in November, 1917. James was wounded and taken prisoner at Cambrai in November, and died of his wounds on 4 December 1917. He was 26 years old, and was buried by the Germans at Caudry British Cemetery, France. 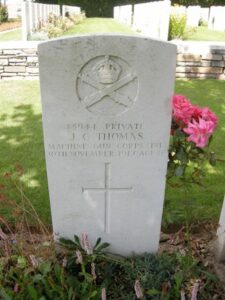 John Thomas, Private, 54088, Welsh Regiment. John was the son of Phillip and Anne Thomas, of Beaconing, Rosemarket. He was probably working as a miner in the Rhondda prior to the war, and enlisted at Aberdare into the army. He was posted to the 17th Battalion, Welsh Regiment, which was attached to 119 Brigade, 40th (Bantam) Division. The Division moved to France in the first week of June 1916, and moved to the front near Loos. Late in 1916 they moved south to the Somme, and fought at the Battle of the Ancre, and remained in the area over the winter. In March 1917 the Germans withdrew to their shortened line, called the Hindenburg Line, and the 40th Division was one of the Divisions that followed the withdrawal. John was killed during a trench raid near Gonnelieu on 12 July 1917, aged 22. He is buried at Fins New British Cemetery, Sorel-Le-Grand, France. 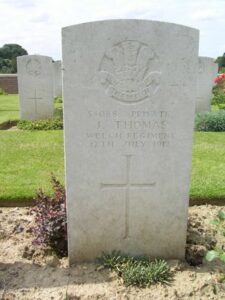 Phillip James Allen, Engineman, LT/265 E.U., Royal Naval Reserve (Patrol Service). Phillip was born in Cardiff on 4 January 1899, the son of William and Anne Allen. By 1911 the family had moved to Steynton, and Philip had enlisted at Milford into the Royal Naval Volunteer Reserve. He married Mary Ann Bowen, of Neyland in 1923, but Mary died in 1928, and in 1933 Philip married Elsie M Picton.During WW2 he served with the Royal Naval Patrol Service aboard HM Trawler Lord Inchcape, which was a Hull Trawler, taken over by the Admiralty in August 1939. She was sunk on 25 October 1940 after hitting a mine, but was raised and repaired, and saw further service during the war on anti-submarine duties and minesweeping. Philip died on active service at Falmouth on 20 August 1943. He was 44 years old, and is buried at Falmouth Cemetery, Cornwall. 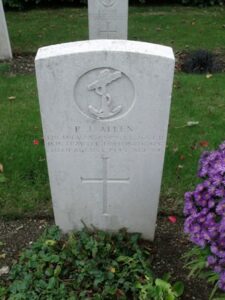 George Hart, Lance Corporal, 2927097, Queen’s Own Cameron Highlanders. George was the son of John and Margaret Hart, and the husband of Edna May Hart, of Rosemarket. He served with the 1st Battalion, Cameron Highlanders. The battalion had served with the BEF during the retreat to Dunkirk in 1940, and on their return to England were sent to the Far East in June 1942. George was killed in Burma on 4 May 1944. He was 33 years old, and is commemorated on the Rangoon Memorial, Myanmar. George is not commemorated on either of the Rosemarket Memorials. 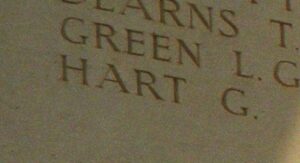 Albert Charles John, Shipwright 3rd Class, D/M 14425, Royal Navy. Albert was the son of John and Ellen John of Rosemarket. He had served throughout the Great War as a shipwright and retired in 1936 after 21 years service. Albert was called up in August 1939 and was posted aboard the aircraft carrier H.M.S. Courageous. On 31 August 1939 she went to her war station at Portland and embarked  two squadrons of Fairey Swordfish. She left Plymouth on the evening of 3 September for an anti-submarine patrol in the Western Approaches, escorted by four destroyers. On 17 September 1939 Courageous was about to launch Swordfish when she was struck by two torpedoes which had been fired by the German submarine U-29. Courageous sank within 20 minutes, with the loss of over 500 of her crew. Albert was 50 years old when he died that day, and is commemorated on the Plymouth Naval Memorial, Devon. Albert was one of the first two Pembrokeshire men to die during WW2, the other man, Henry William Davies of Lawrenny, also served aboard Courageous. 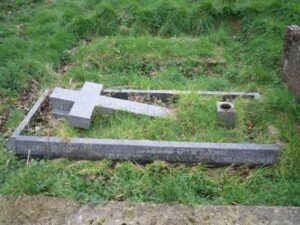 Harold Joseph Palmer, Private, 4197594, The Devonshire Regiment. Harold was the son of James and Rebecca Palmer, and the husband of Queenie Gwendoline Palmer, of Rosemarket. He served with the 1st Battalion, The Devonshire Regiment. The battalion was at Imphal, India at the outbreak of war, and fought on the North-West Frontier, and in Ceylon and Burma. Harold died in India aged 26, on 7 May 1944, and is buried at Imphal War Cemetery, India. Harold is not commemorated on either of the Rosemarket Memorials. 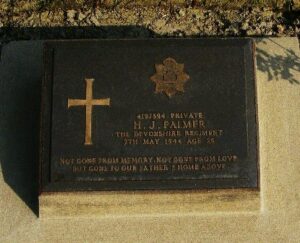 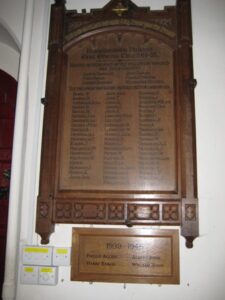