During the Second World War, RAF Coastal Command’s most important contribution was the protection of Allied convoys from attacks by German U-boats. It also protected Allied shipping from aerial attacks by the Luftwaffe. By the end of the war, 5,866 Coastal Command personnel had been killed in action. Pembrokeshire was home to several Coastal Command Squadrons during the war, based at the numerous airfields scattered around the county.

The Church at Robeston Wathen has a close association with the Royal Air Force. A previous Vicar, Reverend Llewellyn-Davies, had been Chaplain to the base at RAF Templeton, which was home to several Coastal Command units of 17 Group during the war. As a result, the Church contains a Memorial Chapel to RAF Coastal Command, which contains a number of memorials, including a fine leaded glass window depicting an airman in RAF Battledress. 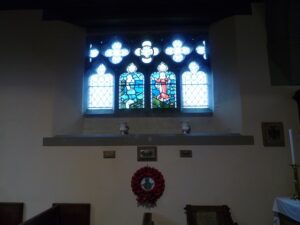 At the end of the war the window and memorials in the chapel were dedicated on Remembrance Sunday 1946 by the late Group Captain Reverend F W Cocks, Chaplain to King George VI.

Sir Henry Walford Davies, Master of the King’s Music, who wrote the Royal Air Force March in 1918, is connected to the church through his daughter, who presented this wooden cross to it: 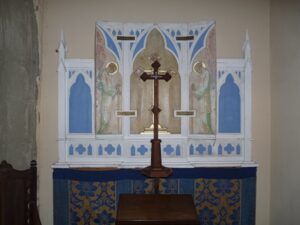 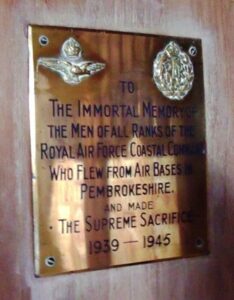 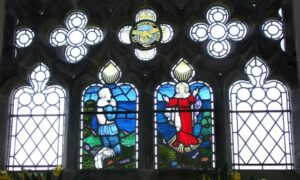 Vivian James Ackroyd, Sergeant, 415510, Royal New Zealand Air Force. Vivian was the son of Herbert Ackroyd and Edith Emily Ackroyd (Nee Thomas), of Temuka, Canterbury, New Zealand. He served as a Wireless Operator/ Air Gunner with 306 Ferry Training Unit, Royal New Zealand Air Force. Vivian was stationed at RAF Templeon during the war. He was killed when his Bristol Beaufort crashed near Sodston on 1 April 1943. He was 21 years old, and is buried at Robeston Wathen Churchyard. 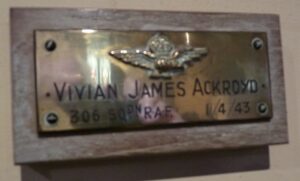 William Victor Bibby, Flight Sergeant, 1579109, Royal Air Force Volunteer Reserve. William was the son of William Victor and Catherine Jane Bibby, of Robeston Wathen. He served with 576 Squadron, Royal Air Force, which was a heavy bomber Squadron, equipped with the Avro Lancaster, and based at RAF Fiskerton, in Lincolnshire. William formed part of the experienced crew of Lancaster NF975, which took off from Fiskerton at 21.41 on 20 February 1945, bound for Dortmund. Sadly the Lancaster was lost after being hit by flak, which caused it to crash into the North Sea whilst returning from the raid, on the morning of 21 February 1945. William was 25 years old, and is commemorated alongside his fellow crewmen on the Runnymede Memorial, Surrey. 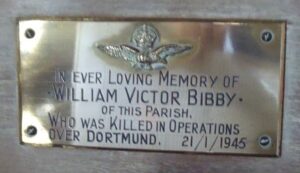 Richard Joseph Napierala, Aircraftman 2nd Class, 1433838, Royal Air Force Volunteer Reserve. Richard was the son of Joseph and Helen Napierala, of Beare Green. The family were Polish refugees, who had fled to Britain after the Nazi invasion of their country. Richard was serving with a Polish Training Squadron at RAF Templeton, and was an active member of Roberston Wathen Church. He died whilst parachute training at Winchester on 13 January 1944. Richard was 22 years old, and is buried at Dorking Cemetery, Surrey. 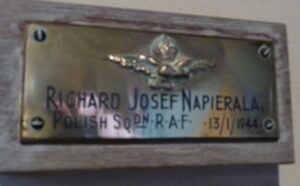