R.A.F. Talbenny was opened in 1942, becoming the home to No 4 Armament Practice Camp from December 1942 until September, 1945. The base was occupied by 311 Squadron, flying the Wellington IC from June 1942 until May 1943. 248 Squadron also arrived here in September, 1942 equipped with the Beaufighter VIC, leaving just two months later. 304 Squadron flew the Wellington IC here for several weeks at the end of 1942, when 248 Squadron took over from them, flying the Beaufighter VIC from here for a month. No 303 Ferry Training Unit joined them in March 1943, also leaving during September, 1945, and Talbenny also became home to No 11 Ferry Unit from September 1944 until August 1945.  Talbenny came under No. 44 Group in 1944, and finally closed in 1946. Talbenny Church houses a framed memorial to all of the aircrew from RAF Talbenny who lost their lives during World War Two. This page serves to commemorate these men. 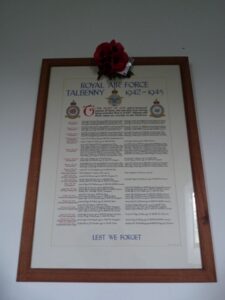 TO THE GLORY OF GOD and in honoured memory of those who lost their lives during flying activities from or at R.A.F. Talbenny and whose names are recorded on this memorial.