Puncheston is a parish situated about twelve miles north-north-east of Haverfordwest, and four miles east of Letterston. It has ancient roots, being built near an ancient encampment. The parish church is dedicated to St. Mary, and in the churchyard is the parish war memorial, in the style of a headstone, which commemorates those who served and those who fell during the Great War. There is also an individual memorial in the village to William Price, who fell during the Great War. The photographs of the memorials were kindly sent in by Dai Phillips. 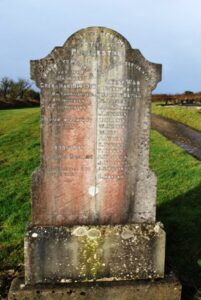 David Christopher Parry-Davies, Captain, South Wales Borderers. David was born in 1899, the son of David Rhys and Elizabeth Parry-Davies, of The Rectory, Puncheston. He was commissioned into the South Wales Borderers on 31 October 1914, and promoted to Temporary Captain on 23 December 1915. He was posted to France on 24 September 1916, at first joining the 6th Battalion, South Wales Borderers. When the 2nd Battalion, South Wales Borderers moved to France from Egypt on 15 March 1916, David was transferred to them. They had been at Gallipoli in 1915 attached to 87 Brigade, 29th Division, and upon transferring to France took up positions at Beaumont Hamel. In April 1916, the 2nd SWB were the subjects of a raid by the Germans which caused heavy casualties, and resulted in a large number of men being taken prisoner. As a retaliatory gesture, on 29 April a Company of the battalion moved into No Man’s Land behind an artillery bombardment, to exact their revenge. Unfortunately the men were caught in their own bombardment, and suffered heavy casualties. David was badly wounded here, and died at No. 4 Casualty Clearing Station on 10 May 1916. He is buried at Beauval Communal Cemetery, France. 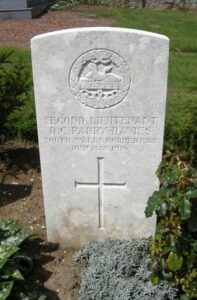 Francis Henry Howells, Sapper, 241786, Royal Engineers. Francis was born on 10 December 1890, the son of Mark and Mary Howells, of Puncheston, Fishguard. He married Rose Ellen Howells, of 33, Manchester Road, Swindon, and enlisted at Penarth into the army. Francis served with the Middlesex Regiment, before being transferred into the 209th Field Company, Royal Engineers on 26 February 1917. They were attached to the 34th Division, who had been in France since January 1916. The Division fought on the Somme, and at Arras, where Francis was Killed in Action at Divisional Headquarters on 19 April 1918, aged 37. He is buried at Mont Noir Military Cemetery, St. Jans-Cappel, France. His brother Thomas also fell. 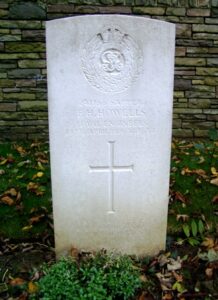 Thomas Raymond Howells, Rifleman, R/3235, King’s Royal Rifle Corps. Thomas was the son of Mark and Mary Anna Raymond Howells, of Drovers Arms, Puncheston. He enlisted at Bargoed into the army, and was posted to the 11th Battalion, King’s Royal Rifle Corps, which was attached to 59 Brigade, 20th (Light) Division. On 26 July 1915 the Division moved to the Fleurbaix Sector for trench familiarisation and training. When the Battle of Loos was launched on 25 September 1915 the Division fought a diversionary attack towards Fromelles. Later that year they moved north, and fought at the Battle of Mount Sorrel alongside the Canadian Corps. They then fought through the Somme Offensive, and took part in the advance to the Hindenburg Line in March 1917. Later that year they fought at Third Ypres, before moving south in November, to take part in the Battle of Cambrai. They remained in the area between Cambrai and St. Quentin over the winter of 1917/18 and were attacked there by the German Spring Offensive of 21 March 1918. They then fought in the retreat at the Battle of the Somme Crossings and the Battle of Rosieres. Thomas died during the final offensive, on 29 October 1918, aged 28. He is buried at St. Pol British Cemetery, St. Pol-Sur-Ternoise, France. His brother, Francis Henry Howells, also fell. 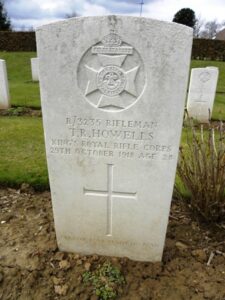 William Price, Private, 282278, Lancashire Fusiliers. William was the son of Thomas and Martha Price, of Carndifo, Trecwn. He enlisted at Carmarthen into the 2/7th Lancashire Fusiliers, which was attached to 197 Brigade, 66th Division. The Division fought through the Battle of Passchendaele during the Autumn of 1917, before moving south to the St. Quentin area. Here, the Division was practically wiped out during the German Offensive of March 1918, and was forced to be disbanded. It was on the first day of this German Offensive, on 21 March 1918, that William was Killed in Action when his battalion was almost wiped out. He was 30 years old, and is remembered on the Pozières Memorial, France, and on a plaque in Puncheston Cemetery. 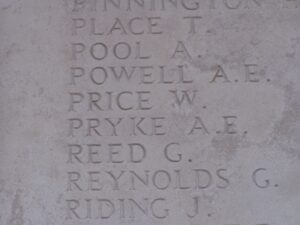 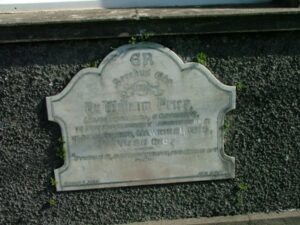 “Greater Love Hath No Man Than This”

William John Williams, Lance Serjeant, 3957562, Welch Regiment. William was the son of Thomas Henry Williams and Mary Ann Williams, of Dwrbach. His father was killed during WW1, so Mary moved the family to Llanteg, Puncheston. William served with the 4th Battalion, Welch Regiment, which was a Territorial Battalion, attached to the 53rd (Welsh) Division. The division spent the early years of the war on home service in Northern Ireland and England, before landing in Normandy at the end of June 1944. It then took part in the break-out from the Normandy beach-head, and the subsequent drive through Northern France, through Belgium and Holland towards Germany. William was killed during heavy fighting in the Reichswald Forest on 25 February 1945, aged 32. He is buried in Reichswald Forest War Cemetery, Germany. William is stood in the middle of the photograph below. 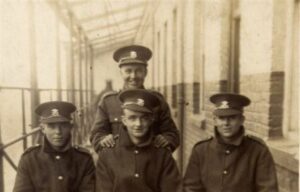 “His Sacrifice Was Not In Vain”

Some of these men can be identified from the Absent Voters List and some from searching on Ancestry:

Wilfred Owen Parry-Davies, MC, Second Lieutenant, Royal Garrison Artillery. Wilfred was born in 1883, the son of David Rhys and Elizabeth Parry-Davies, of The Rectory, Puncheston. He was the brother of David Christopher Parry-Davies, above. He had originally enlisted as a Gunner, but was commissioned as Second Lieutenant on 25 June 1917. He was awarded the Military Cross during the war. Please see the Pembrokeshire Heroes page for details. He died at Worthing in 1958.

John Harries, Private, 266499, Welsh Regiment. John was the son of David and Mary Harries, of Treyet, Puncheston and served with the 1st/4th Battalion, Welsh Regiment. He was later attached to a battalion of the Royal Welsh Fusiliers.

John Howells, Private, 275, Pembroke Yeomanry. John was the son of Mark and Mary Howells, of Puncheston. He had enlisted into the Pembroke Yeomanry in March 1910 and had attended summer camp every year afterwards. He was attached to the 6th Provisional Battalion in 1915 but did not serve overseas as he did not volunteer for service abroad. John was discharged on 4 March 1916. His brother Douglas was called up for service, but a successful appeal by his father allowed him to remain home to work on the family farm.

Osborne Morgan. Osborne was the son of John and Dinah Morgan, of Puncheston. I cannot currently identify which unit he served with, but he died on 19 April 1965.

Albert Thomas, Driver, 219868, Royal Engineers. Albert lived at Sheriff House, Letterston and worked as a Shoeing Smith. He married Mary Ann Polly Thomas at Haverfordwest on 12 April 1912 and the couple had two children. He had served with the Pembroke Yeomanry before the war and on 5 July 1916 attested at Carmarthen into the Royal Engineers. Albert served in England with the 2nd (London) Field Company, Royal Engineers until being discharged on 27 February 1919.

Alfred Williams, Corporal, 34616, South Wales Borderers. Alfred lived in Puncheston village and was a regular soldier, serving with the 1st Battalion, Welsh Regiment for six years prior to the war after having enlisted on 26 September 1908. He was in India with the battalion when it was recalled to England and then sent to France on 6 January 1915 to join the BEF. He was shot in the back when the battalion was at Neuve Chapelle in March 1915 and was stuck in the wire for several hours before being rescued. After recovering he was posted back to France with the 2nd Battalion, South Wales Borderers. He survived the war and was discharged from the army on 31 January 1919.