Pontfaen is a small village situated about five miles south-east of Fishguard. The village Church, which is dedicated to St. Brynach, dates from Medieval times, and was largely ruined by the nineteenth century. It was restored in the 1890s. Inside the Church is a wooden memorial to two brothers from the village who fell during the Great War. 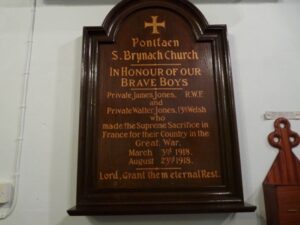 James Jones, Private, 204719, Royal Welsh Fusiliers. James was the son of Thomas and Mary Jones, of Penverdir Isaf, Pontfaen. He was a Postman prior to the war, and enlisted into the Welsh Regiment at Carmarthen on 8 April 1916. James landed in France on 20 August 1917, and was posted to the 17th Battalion, Royal Welsh Fusiliers, which was attached to 115 Brigade, 38th (Welsh) Division. The battalion had been moved to positions near Armentieres when James joined them, after having taken part in heavy fighting at Ypres. James was struck by shell fragments in his thigh while in the trenches on 3 March 1918. He died of his wounds at 34th Casualty Clearing Station later that day, and is buried at Merville Communal Cemetery Extension, France. 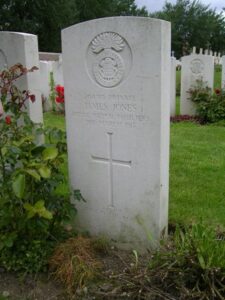 Walter Jones, Private, 33961, Welsh Regiment. Walter was born at Nevern, but had moved to Pontfaen before the war, and enlisted at Fishguard into the 13th Battalion, Welsh Regiment. The battalion was attached to 114 Brigade, 38th (Welsh) Division, and had been in France since December 1915, and had fought in Flanders, at Mametz Wood on the Somme, and at Pilckem Ridge during the Battle of Passchendaele. In April 1915 the division had been moved to positions north of Albert on the Somme, and remained there until the launching of the great offensive of August 1918. Walter was wounded at Aveluy Wood just before the opening of the Battle of Albert. He died of wounds on 23 August 1918 and is buried at Varennes Military Cemetery, France. 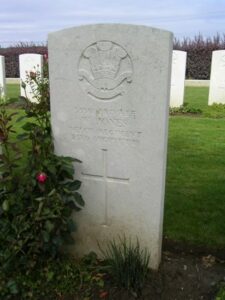