Pennar is a part of the larger town of Pembroke Dock, in West Wales. The community is served by St. Patrick’s Church, which contains a marble memorial plaque, which is dedicated to its parishioners who fell during the Great War. The photograph of the memorial was kindly sent in by Mike Berrell. 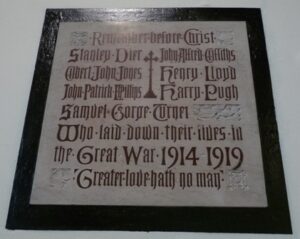 Richard Stanley Dier, Private, 10572, Royal Welsh Fusiliers. Richard was born in 1892, the son of Richard and Caroline Dier, of Pembroke Dock. He was a pre-war regular soldier, having enlisted at Cardiff into the 1st Battalion, Royal Welsh Fusiliers at during March 1911. At the outbreak of war the battalion joined 22 Brigade, 7th Division, and moved to Zeebrugge on 7 August 1914. By then the City was falling to the Germans, and 7th Division moved to Ypres, where it took part in the first desperate Battle of Ypres, where the German advance on the Channel posts was halted. Richard was killed at Ypres on 19 October 1914, aged 21. Richard has no known grave, and is commemorated on the Ypres (Menin Gate) Memorial, Belgium, on Panel 22. 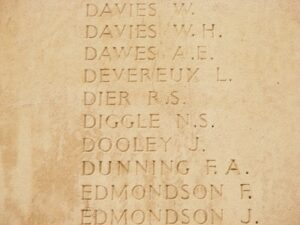 John Alfred Griffiths, Sergeant, 17945, Welsh Regiment. John was born at Walwyn’s Castle in 1889, the son of Mary Griffiths. Mary was widowed prior to 1901, and married George Bailey Richards, of 5, Fleet Street, Pennar. John was raised at Pennar, and worked as a Policeman at Mumbles prior to the war. He enlisted there into the 14th Battalion, Welsh Regiment, which was known as the Swansea Pals. The Battalion was raised at Swansea by the Mayor and Corporation with the Swansea Football and Cricket Club, and moved to Rhyl in 129 Brigade, 43rd Division. After training, the Division moved to Winchester, where the formation became 114 Brigade, 38th (Welsh) Division, and in December 1915 landed at Le Havre. The Division moved to positions in the so called Nursery Sector near Fleurbaix, and received instruction in trench warfare from the Guards and 19th Divisions. It moved to positions on the La Basseé Canal in the spring of 1916. The 14th Welsh were in the front line trenches at Givenchy when John was killed, on 13 March 1916, aged 27. He is buried at Guards Cemetery, Windy Corner, Cuinchy, France, in grave ref. III. M. 12. 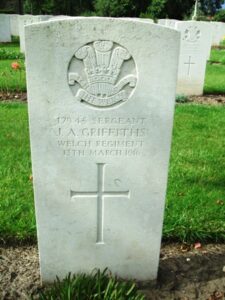 Gilbert John Jones, Private, 13788, Kings Shropshire Light Infantry. Gilbert was born at Neyland Dock in 1891, the son of John and Elizabeth Jones. By 1911 the family was residing at 3, Upper Row, Golden Hill, Pembroke. He enlisted at Maesteg into the army and was posted to the 7th Battalion, King’s Shropshire Light Infantry, which was attached to 76 Brigade, 25th Division. The battalion moved to France on 28 September 1915, where it was transferred to the 3rd Division, which was at Ypres. In the summer of 1916 the Division moved to the Somme, and took part in the Battle of Albert, and at the Battle of Bazentin, where they captured Longueval. They then took part in the Battle of Delville Wood, and the Battle of the Ancre, before settling into another bleak winter in France. In May 1917 the Division were at Arras, and it was here that Gilbert was killed on 3 May 1917, aged 26. Gilbert has no known grave, and is commemorated on Bay 7 of the Arras Memorial, France. 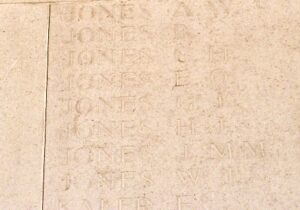 Henry Lloyd, MM, Corporal, T/069724, Royal Army Service Corps. Henry was the son of Henry Lloyd, of Owen Street, Pembroke Dock, and served with No. 3 Company, 38th Divisional Train, Royal Army Service Corps. Henry landed in France with the Division on 3 December 1915, and saw action at Mametz Wood the following year. In July 1916 the Welsh Division moved to Ypres, and in August 1917 took part in the Battle of Pilckem Ridge. Henry was awarded the Military Medal, for Bravery in the Field at Ypres, which was listed in the London Gazette of 25 September 1917. He survived the war, but died of influenza at the Hospital at Caudry, in Northern France on 25 November 1918, aged 26. Henry is buried at Caudry British Cemetery, France, in Grave Ref. II. B. 16. 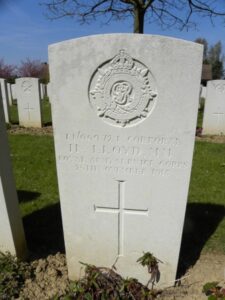 John Patrick Joseph Phillips, Private, 6953, Royal Irish Regiment. John was born in Ireland on 27 May 1899, the Son of Alfred Thomas and Esther Elizabeth Phillips. By 1901 the family had moved to 43, High Street, Pembroke Dock. John enlisted at Cardiff into the Army, and was posted to the 7th Battalion, Royal Irish Regiment, which was attached to 21 Brigade, 30th Division. The Division moved to France in November 1915, and had fought on the Somme in 1916, and at the Battle of Arras the following year, before moving to Ypres, and fought at the Battle of Pilckem. After seeing much heavy fighting throughout 1918, the 30th Division took part in the Advance in Flanders towards the end of the war, and it was here that John was killed during the capture of Wulverghem on 2 September 1918. He was just 19 years old, and is buried at Dranoutre Military Cemetery, Belgium, in Grave Ref. III. A. 26. 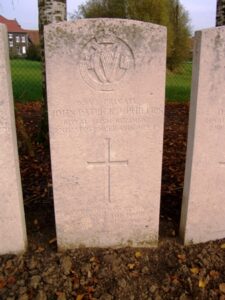 Harry Pugh, Private, 7698, Kings Shropshire Light Infantry. Harry was born at Cleobury Mortimer, Shropshire. He was stationed at Pembroke Dock before the war with the King’s Shropshire Light Infantry, and was the Husband of M. Pugh, of Cranfield House, Beverley Street, Port Talbot. Harry served with the 1/4th Battalion, King’s Shropshire Light Infantry, which had been on Garrison duties at Singapore and Hong Kong for the first two years of the war. On 27 July 1917 the battalion landed at Le Havre, and joined 190 Brigade, 63rd (Royal Naval) Division. The Division then moved to Ypres, and took part in the Battle of Passchendaele. On 4 February 1918 the 1/4th KSLI transferred to 56 Brigade, 19th (Western) Division, and were caught up in the German Spring Offensive near St. Quentin, where they suffered terrible casualties during the Battle of Bapaume. They moved to Ypres, but were caught up in the German attack at Messines. Harry was wounded at Messines, and died at the Casualty Clearing Station at Haringhe on 18 April 1918. He was 42 years old, and is buried at Haringhe (Bandaghem) Military Cemetery, Belgium, in Grave Ref. II. F. 24. 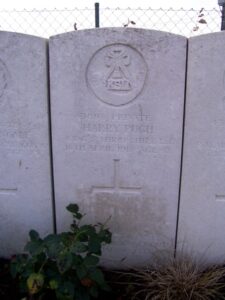 Samuel George Turner, Bombardier, 31927, Royal Garrison Artillery. Samuel was born at Pembroke Dock on 16 November 1894, the son of James and Phoebe Turner. He enlisted there into the Royal Garrison Artillery. After training, he was posted to France with 242nd Siege Battery, RGA, and was killed at Ypres during the build up to the Battle of Passchendaele on 16 July 1917, aged 22. Samuel was buried at Bus House Cemetery, Belgium, in Grave Ref. E. 3. 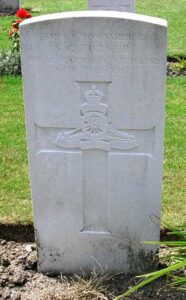