Westgate Calvinistic Methodist chapel is situated close to what was once the west entrance to the ancient town of Pembroke, near the castle, and had sat on the site since 1826. The present building was erected in 1866 and was opened in June 1867. West Gate was originally a Calvinistic Methodist chapel, later used by the Presbyterian Church of Wales, and became Westgate Evangelical Chapel in June 2006. Inside the chapel is a parchment framed memorial to the members of the chapel who served during the Great War of 1914-1918. Two of these men lost their lives during the conflict. 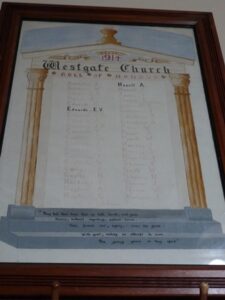 “They took their lives in both hands, and gave

Sadly, without regretting, without dread

They faced war, agony, – even the grave –

With quiet, making no attempt to save

The young years as they sped.”

Of the forty one names on the memorial, only two of the men appear to have lost their lives during the war. These two men’s names are highlighted in black script on the memorial. Their details can be read below:

Ernest Victor Edwards, Second Lieutenant (Pilot), Royal Flying Corps. Ernest was born on 2 July 1889, the son of Ann and David Humphreys Edwards of Towyn House, Main Street, Pembroke. Educated at High School, Middlesbrough, and the County School, Pembroke Dock; on leaving he entered the Civil Service, and eventually became an employee of the Avon Rubber Company in London. Ernest joined the 3rd County of London Yeomanry (T.F.) on 24 April 1908. He served five years with the Colours, and joined the Reserve. He was called up on mobilization in August 1914, and served with the Mediterranean Expeditionary Force in Gallipoli, taking part in the landing at Suvla Bay in August 1915, and in much of the subsequent fighting. Ernest was wounded at Gallipoli, and invalided to Egypt. On recovery he rejoined his regiment, of which he was Sergeant, and proceeded with them to Salonika, and subsequently to Palestine, where he saw severe fighting. Ernest then transferred to the Royal Flying Corps, and was recommended for a commission, and gazetted 2nd Lieutenant on 10 February 1918. Sadly he was accidentally killed while flying Avro 504a, Serial A8541 at Ismailia on the 16 February 1918, and was buried there at Ismailia War Cemetery, Egypt. His Commanding Officer and Adjutant wrote: “I never saw anyone with more backbone; a true Britisher and much loved,” and a Cadet wrote: “To live with him was to come under the influence of an exceptional strength of character and a capacity for cheerfulness as amazing as ever present, combined with a wonderful personality.’

Arthur Howell, Captain, Royal Naval Reserve. Arthur was born in 1891, the son of James and Mary Ann Howell, of 5, Eaton Place, Pembroke. Arthur’s father and brothers were employed at Pembroke Dockyards, but Arthur decided to go to sea, joining the Merchant Navy several years prior to the war. Arthur served for the duration of the war, and died of influenza in New Zealand on 18 November 1918, aged 27. Little else is presently known of him, as he is not commemorated by the CWGC. Many thanks to Giles Howell for identifying his Great Uncle Arthur, and for the photograph of him. 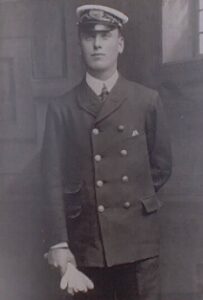