On the night of Saturday 27 December 1919, among a number of ships anchored off-shore at Pembroke Dock were the Arabis class minesweeping sloop HMS Wisteria and the Belgol class tanker RFA Francol. Several crew-members from each ship had been ashore on leave and at 23.00 a mixed group of seven men left the main landing stage at Pembroke Dock aboard a rowing boat to return to their ships. At around 100 yards from shore an argument erupted and one of the men, John Tyler, a man allegedly known for his argumentative nature, attacked the senior officer aboard the boat, Francis Patterson. Some other men rose to their feet to stop the fight but this caused the boat to capsize in the dark water, throwing all seven men into the water. One man, Seaman Trudgeon, was a strong swimmer and managed to reach the anchor rope of a moored trawler before being hauled to safety, while a second man, Seaman Ronayne, clung onto the overturned boat and was hauled ashore unconscious at Hazelbeach by two men who had heard his initial cries for help. Five men drowned following the catastrophe while Ronayne died an hour later after his rescuers failed to resuscitate him, despite their valiant efforts. The six men who died that night in such tragic circumstances are:

James Campbell, Able Seaman, J/20620, Royal Navy. James was born at Prestonpans, Haddington on 19 September 1896, the son of Isobel Campbell. He worked as a miner prior to enlisting into the Royal Navy on 15 September 1912 and saw his first service aboard HMS Ganges. He served aboard a variety of craft and shore establishments during the war and on 6 October 1918 was posted aboard the Belgol class tanker RFA Francol. James was one of the six men drowned when their rowing boat capsized and sank following an altercation at Pembroke Dock on 27 December 1919. The body of the 23-year-old was never recovered so he is commemorated on panel 32 of the Chatham Naval Memorial, Kent. 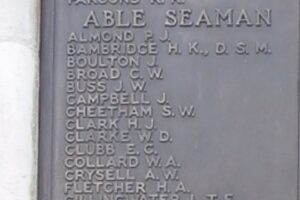 Alfred Ernest How, Petty Officer Stoker, K/3435, Royal Navy. Alfred was born at Woolwich on 18 August 1886, the son of Michael Ernest How. He married Florence Louise Robinson on 25 December 1907 and the couple lived at 28 Maygrove Road, Brondesbury, Kilburn, where Alfred worked as a butchery manager. He enlisted into the Royal Navy on 21 July 1909, seeing his first service aboard HMS Nelson before being posted aboard the cruiser HMS Roxburgh. He spent most of the war based at HMS Attentive III at Dover, and after the Armistice was posted to HMS Vivid, from where he was attached to the Arabis class minesweeping sloop HMS Wisteria. Alfred was one of the six men drowned when their rowing boat capsized and sank following an altercation at Pembroke Dock on 27 December 1919. The body of the 33-year-old was later recovered and buried in grave U.161 in Llanion Cemetery, Pembroke Dock. 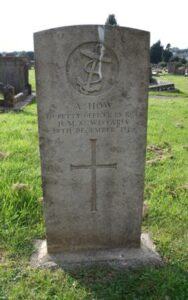 Francis William John Patterson, Artificer Engineer, Royal Navy. Francis was born at Newcastle on 27 March 1879, the son of William George Patterson and Emily Jane Patterson. He married in 1902 and just two years later left his family behind, enlisting into the Royal Navy on 28 May 1904. During the coming years he served aboard a number of ships and shore establishments and upon the declaration of war was serving aboard the cruiser HMS Boadicea, which had been built at Pembroke Dockyard in 1907-1908. He then served at Pembroke Dock until 22 January 1916 when he was posted aboard the Invincible Class Battlecruiser HMS Indomitable. She had an interesting war, taking part in the Battle of Dogger Bank and the Battle of Jutland and in 1919 was part of the Nore Reserve at Pembroke Dock. Francis was the man attacked by John Tyler during the altercation aboard the rowing boat in Pembroke Dock which caused it to capsize and sink on 27 December 1919, leading to the loss of six lives. The body of the 40-year-old was washed ashore at Sandy Haven on 20 January 1920 and he was buried at Llanion Cemetery, Pembroke Dock, in grave V. 33. Francis had been awarded the French Medaille Militaire for his good work during the Battle of Jutland in 1916. 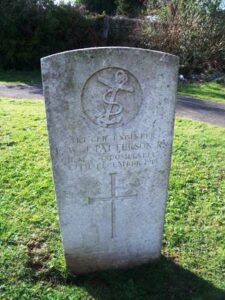 Patrick Ronayne, Able Seaman, Mercantile Marine. Patrick was born on 25 March 1894, the son of Patrick and Mary Ronayne, of Rathcoursey, Middleton, Co. Cork. He served with the Mercantile Marine aboard the Belgol class tanker RFA Francol. On the night of 27 December 1919 Patrick was among seven men who were aboard the rowing boat, returning to their ships when an argument broke out and the resulting altercation saw the boat capsize. Patrick managed to cling to the hull of the overturned boat and call for help but has fallen unconscious before being pulled to shore at Hazelbeach by two local men who had heard his cries and died an hour later, despite their attempts to save him. He was 27 years old and is buried in grave V.31 in Llanion Cemetery, Pembroke Dock. 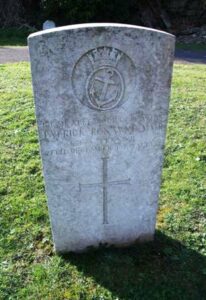 Charles Sheeran, Greaser, Mercantile Marine. Charles was born on 29 July 1889, the son of John and Sarah Sheeran, of 35, Back West End, Bangor, Caernarvonshire. He had worked as a shop porter and enlisted into the Denbighshire Yeomanry (Territorials) on 10 February 1913. He attended his first annual camp at Llangammarch Wells the following year and following the outbreak of war was among a number of men of the regiment attached for duty to the Armstrong Whitworth factory. He served with the Yeomanry until 9 March 1917 when he left and joined the Mercantile Marine and was posted aboard the Belgol class tanker RFA Francol. Charles was one of the six men drowned when their rowing boat capsized following an altercation on 27 December 1919. He was 31 years old and is buried in grave V.37 in Llanion Cemetery, Pembroke Dock. His elder brother, Thomas Sheeran, was killed in France on 2 May 1915. 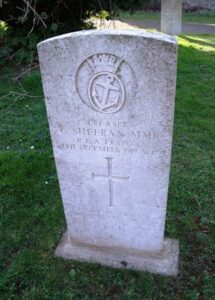 John Tyler, Ordinary Seaman, 883964, Mercantile Marine Reserve. John was the son of Mr and Mrs Tyler, of 69, Collin Road, Mutal House, London. He was serving with the Mercantile Marine aboard the Belgol Class tanker RFA Francol and married Gladys Harries at Pembroke Dock in the summer of 1919. He had been ashore with a small party of men from his ship and was one of seven men aboard the rowing boat on the night of 27 December 1919 when he began arguing with Francis Patterson and attacked him about 100 yards out. In the resulting melee the boat capsized and sank, drowning six of the men aboard, including John. The body of the 19-year-old was never found and he is commemorated on panel 32 of the Plymouth Naval Memorial, Hampshire.