St. Teilo’s Church is situated at London Road, Pembroke Dock, and was built around 1903 to cater for the Church of England worshippers in the town. Within the church is a simple marble memorial to the parishioners who fell during the Great War, made in the same style as the memorial in St. Patrick’s Church at Pennar. 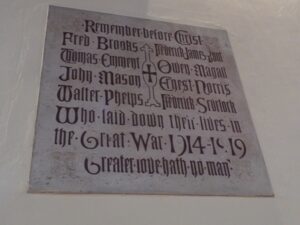 Frederick Brooks, Gunner, 14483, Royal Field Artillery. Frederick was the son of Joseph and Sarah Brooks of Pembroke. He enlisted at Pembroke into the Royal Field Artillery, and was posted to ‘B’ Battery, 92nd Brigade, which was attached to the 20th (Light) Division. On 26 July 1915 the Division completed concentration in the Saint-Omer area, all units having crossed to France during the preceding few days. Early trench familiarisation and training took place in the Fleurbaix area. When the Battle of Loos was launched on 25 September 1915 the Division fought a diversionary attack towards Fromelles. Later that year they moved north, and fought at the Battle of Mount Sorrel alongside the Canadian Corps. Over the winter of 1915/16, the Division remained in positions south of Ypres, and fought at the Battle of Mount Sorrel in June, alongside the Canadian Corps. They then fought through the Somme Offensive, at the Battles of Delville Wood, Guillemont, Flers-Courcelette, Morval and Le Transloy. Frederick was killed in action during the fighting at Le Transloy, on 3 November 1916. He was just 22 years old, and is buried at Carnoy Military Cemetery, France. 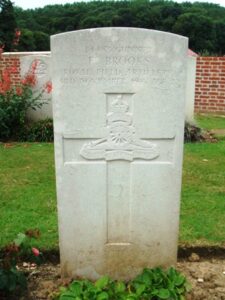 Frederick James Bunt, Driver, 47949, Royal Garrison Artillery. Frederick was born at the Defensible Barracks, Pembroke Dock in 1892, the son of Sidney and Annie Elizabeth Bunt (nee Gravett). His father was originally from Gosport, Hampshire, and served with the Royal Artillery at Pembroke Dock, where he had married Annie in 1883. Fred followed in his father’s footsteps, and enlisted on 29 August 1907 into the Royal Artillery at Pembroke Dock. On 4 November 1911 he married Annie Maria Cotton, at Newport, Isle of Wight. By the outbreak of the Great War, Fred was stationed at Gosport, where he was attached to No. 33 Company, Royal Garrison Artillery. He served at the Gibraltar Garrison from 27 December 1914, until 15 September 1915, before returning to Gosport, where he was discharged from the Royal Artillery on 15 October 1915 for misconduct. He appears to have then served with the Hampshire Regiment and possibly died of wounds in France on 7 July 1918, but is not commemorated by the Commonwealth War Graves Commission, so nothing further has yet been traced.

Thomas Edward Emment, Corporal, 18823, Welsh Regiment. Thomas was born at Pembroke Dock in 1890. He worked as a Draper prior to the war, and resided with his sister, Miss Rosa Emment, at 4, Loraine Road, Holloway, London. Thomas enlisted at London into the 9th Battalion, Welsh Regiment, which was attached to 58 Brigade, 19th (Western) Division, and landed in France during July 1915. The division moved to positions near La Bassee, north of Loos, where they took part in the opening assault of the Battle of Loos on 25 September 1915. Thomas was killed in action that day, aged 24. He has no known grave, and is commemorated on the Loos Memorial, France, on Panel 77 & 78. 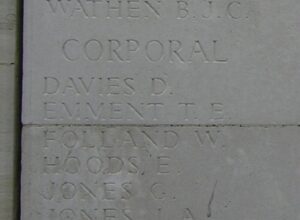 Owen Arthur Mitchell Magall, Private, 65327, Cheshire Regiment. Owen was born at Trincomalee, Ceylon on 2 August 1899, the Son of James and Sarah Magall. He lived at Pembroke Dock before the war, before enlisting into the Army Service Corps in 1913, at the age of 14. When Owen reached the age of 18, he was posted to the 11th Battalion, Cheshire Regiment, which was in France attached to 75 Brigade, 25th Division. Owen joined the battalion at Ploegsteert on 3 April 1918, and was immediately thrown into terrible fighting, when the Germans launched their offensive on the Lys on 9 April. After a desperate spell of fighting, Owen was reported as missing in action. On 20 April 1918 the Red Cross reported him as being a Prisoner of War at Limburg Camp, in Germany. Owen died in Hospital in Worms on 5 November 1918. He was 19 years old, and is commemorated on the Screen Wall at Worms (Hochheim Hill) Cemetery, Germany. His personal possessions and medals were sent to his sister, Miss Ethel Magall, who was a Nurse at the 2nd London General Hospital, Chelsea.

John Mason, Stoker 1st Class, 229299, Royal Navy. John was born on 6 April 1887, the son of James and Hannah Mason, of West Orielton. John married Beatrice Rowena Johns in 1913, and the couple resided with their two children at Waterloo, Pembroke Dock. John served aboard HMS Marmion, a Moon Class Destroyer, which was launched on 28 May 1915. On 21 October 1917, Marmion was involved in a collision with HMS Tirade, another Royal Naval destroyer, off Lerwick, Shetland Isles, and sank. John was one of several seamen to lose his life in the sinking. His body must have washed ashore at Norway, and John is one of several sailors from Marmion to be buried in Fredrikstad Military Cemetery, Norway.

Ernest Norris, Lance Sergeant, 7182, Duke of Edinburgh’s Wiltshire Regiment. Ernest was born at Mere, Wiltshire on 8 March 1887, the son of James and Mary Ann Norris. He resided at Pembroke Dock at the outbreak of war, where he served with the 1st Battalion, Wiltshire Regiment. Ernest married Mary Ellen Furlong at Pembroke Dock whilst on leave in June 1915. He then returned to France attached to the 6th Battalion, Wiltshire Regiment, which was attached to 58 Brigade, 19th (Western) Division. The Division crossed to France between 11 and 21 July 1915, and moved to positions near Loos, where it took part in the opening attack of the Battle of Loos on 25 September 1915. The following year the Division moved to the Somme, where it took part in the second wave of the attack on Ovillers-La Boisselle on 1 July, capturing the village at heavy cost. It then fought through the Somme Battles of Pozières and the Ancre in 1916. In 1917 the Division moved north to Ypres, taking part in the Battle of Messines, and fought on the Menin Road and at Polygon Wood. Ernest was killed here on 20 September 1917, aged 30. Ernest is commemorated on Panels 119/120 of the Tyne Cot Memorial, Belgium. 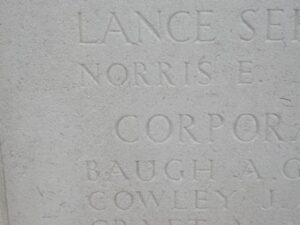 Ewart Walter Lewis Phelps, Fitter, Royal Navy. Ewart was born on 21 January 1890, the Son of George and Sarah Ann Phelps, of 5, Belle Vue Terrace, Pembroke Dock. He served as a civilian fitter at HM Dockyard Malta, and was killed aboard the Armed Boarding Steamer HMS Louvain, when she was sunk by the German submarine, UC-22 on 20 January 1918. Ewart was 28 years old, and is commemorated on the Plymouth Naval Memorial, Devon, on Panel 31. 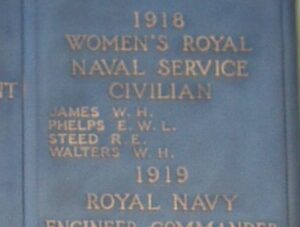 Frederick John Scurlock, Gunner, 112487, Royal Field Artillery. Frederick was the Son of John Henry and Catherine Elizabeth Scurlock, of Pembroke Dock. He served with C Battery, 102nd Brigade, Royal Field Artillery, which was attached to 23rd Division. Between 21 and 26 August, 1915 the Division landed in Boulogne and proceeded to the Western Front, initially concentrating near Tilques. They saw their first major action at the Battle of Albert, where they captured Contalmaison, and then fought at the Battle of Bazentin, the Battle of Pozières, the Battle of Flers-Courcelette, the Battle of Morval and the Battle of Le Transloy, where they captured Le Sars. In May 1917 they took part in the Battle of Messines, before moving further north to Ypres, and fighting at the Battle of the Menin Road, the Battle of Polygon Wood, the First Battle of Passchendaele and the Second Battle of Passchendaele. At the end of October 1917 the division moved by rail to Italy, concentrating between Mantua and Marcaria in November. On 4 December the Division took over a section of front line on the Montello, relieving the 70th Italian Division, and then fought at the Battle of Asiago and the Battle of Vittorio Veneto. Frederick was wounded here, and died of his wounds on 18 June 1918. He was 30 years old, and is buried at Dueville Communal Cemetery Extension, Italy, in Grave Ref. I. C. 1. 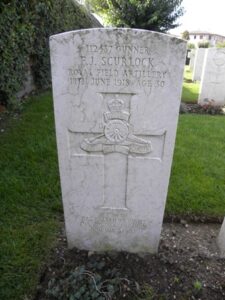