St. Andrew’s Presbyterian Church is located at Bush Street, Pembroke Dock, and was built around 1866. Inside the Church is a fine marble war memorial to its members who fell during the Great War. The photograph of the memorial has been kindly sent in by Huw Morgan of Pembroke Dock. 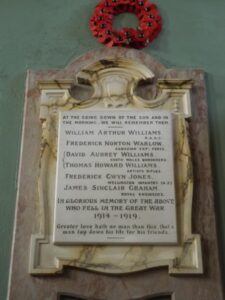 James Sinclair Graham, MID, Corporal, 14584, Royal Engineers. James was the Son of Peter and Jane Graham, of Pembroke Dock, and the husband of Anne Graham, of 48, Military Road, Pennar, Pembroke Dock. He enlisted at Pembroke into the Royal Engineers at some time prior to 1911, and at the outbreak of war landed in France with the BEF. James was later posted to the 57th Field Company, Royal Engineers, which was attached to the 49th (West Riding) Division. The Division moved to France between 12 and 19 April 1915 and saw its first major action on the Somme, during the Battle of Albert. They remained on the Somme, taking part in the Battle of Bazentin, the Battle of Pozières, and the Battle of Flers-Courcelette, and the following year saw action at Third Ypres, during the Battle of Poelcapelle. James was wounded here, and brought back to Ypres for treatment, but sadly he died of his wounds on 13 October 1917, aged 36. James is buried at Ypres Reservoir Cemetery, Belgium, in grave ref. I. H. 30. James was Mentioned in Sir Douglas Haig’s Despatches for bravery during his time at war. 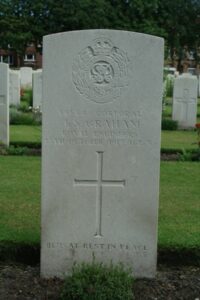 Frederick Gwyn Jones, Private, 23837, New Zealand Infantry. Frederick was the son of David and Jane Jones of 37 Park Street, Pembroke Dock. He had emigrated to New Zealand at some time between 1911 and 1914, and at the outbreak of war enlisted into the New Zealand Infantry, and embarked at Wellington on 27 May 1916 for England with the 13th Reinforcements for the 1st Battalion, Wellington Regiment, which was in France attached to the 1st Brigade, New Zealand Division. The division was on the Somme when Frederick arrived in France, and he would possibly have taken part in the Somme offensive. On the following year the New Zealanders moved to Ypres, and that is where Frederick was killed, on 3 October 1917, aged 29. He is commemorated on the Tyne Cot Memorial, Belgium. 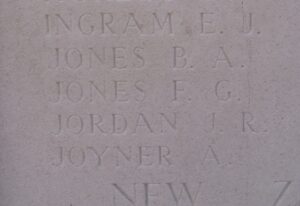 Frederick Norton Warlow, Private, 442234, Canadian Infantry. Fred was born on 20 August 1884, the son of William and Elizabeth Warlow, of 36, Queen Street, Pembroke Dock. He had served for several years with the Pembroke Imperial Yeomanry before deciding to emigrate to Canada prior to the war. He enlisted at Vernon, British Columbia into the 7th Battalion, Canadian Infantry on 29 May 1915, and embarked for Britain, before moving to France, where the Battalion was attached to the 2nd Canadian Brigade, 1st Canadian Division. Fred fought on the Somme in 1916, and was wounded at Courcelette during the Battle of Thiepval Ridge. He was evacuated to the Base Hospital at Le Havre for treatment, but died there of his wounds on 1 October 1916. Fred was 31 years old, and is buried at Ste. Marie Cemetery, Le Havre, France, in Grave Ref. Div. 3. I. 3. 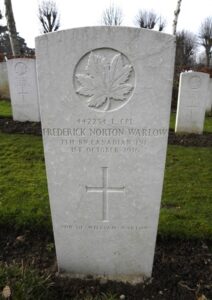 David Aubrey Williams, Second Lieutenant, South Wales Borderers. David was the son of William and Mary Williams, of 95, Laws Street, Pembroke Dock. He was a schoolmaster at Cardiff prior to the war. David was commissioned from the Royal Engineers into the 1st Battalion, South Wales Borderers, and landed in France on 5 January 1916. The 1st SWB was attached to 3 Brigade, 1st Division, and had been in France since the outbreak of war. In 1916 the Division moved to the Somme, where it took part in the Battle of Albert during the opening of the Somme Offensive. David was killed three weeks into the battle, on 25 July 1916, aged 29. He is commemorated on the Thiepval Memorial, France, on Pier and Face 4A. His brother Thomas Howard Williams also fell. 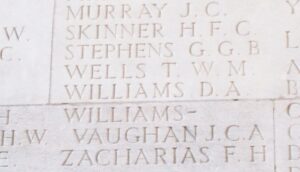 Thomas Howard Williams, Private, 765298, London Regiment. Thomas was the son of William and Mary Williams, of 95, Laws Street, Pembroke Dock. Prior to the war he had worked for 19 years in the service of the London and Provincial Bank at Cardiff, where he resided with his wife, Nancy Williams, at Ship House, The Leys, St. Athans. Thomas had enlisted at Cardiff on 1 December 1915 into the 1/28th Battalion, London Regiment (Artists Rifles). The battalion was an officer training battalion for most of the war, and on 28 June 1917 joined 190 Brigade, 63rd (Royal Naval) Division. The RND was at Arras by then, before moving to positions at Ypres, where they took part in the Battle of Passchendaele. Thomas joined the battalion in France on 13 September 1917, at the height of the Passchendaele offensive. He was killed at Passchendaele on 30 October 1917, aged 34, and is commemorated on the Tyne Cot Memorial, Belgium, on Panel 153. Nancy returned to Pembroke Dock to live, but in 1922 married John Gibbs, and moved back to Cardiff. Thomas’s brother David Aubrey Williams also fell. 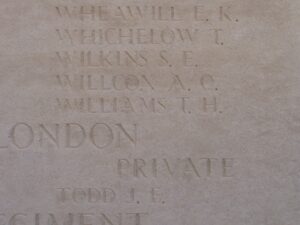 William Arthur Williams, Armament Staff Sergeant, 392, Royal Army Ordnance Corps. William was the Son of William and Esther Williams, of Pembroke Dock, and the husband of Leah Annie Williams, of 35, Meyrick Street, Pembroke Dock. He was a regular soldier, and served with the 11th Heavy Artillery H.Q., Royal Army Ordnance Corps on the Western Front. William was mortally wounded at Ypres, and died of his wounds on 29 December 1915. He was 35 years old, and is buried at Lijssenthoek Military Cemetery, Belgium, in Grave Ref. IV. C. 33. 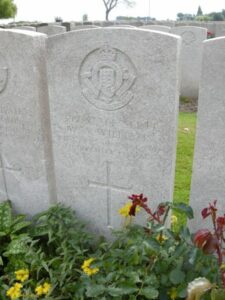