Bethany English Baptist Chapel is situated at High Street, Pembroke Dock, and was originally built in 1818. Within the Chapel is a elaborately decorated memorial which commemorates all of the members of the Chapel who served during the Great War. Names on the memorial have been marked to show if the members were killed, wounded, taken prisoner, or were awarded gallantry medals during the war. 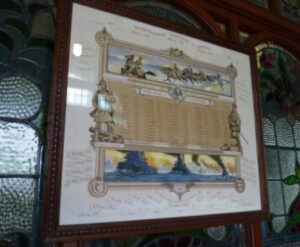 David George Griffiths, Corporal, 320217, Welsh Regiment. David was the son of Benjamin John and Elizabeth Griffiths, of Pembroke Dock. He enlisted at Tenby on 10 August 1914, into the Pembroke Yeomanry, with the army number 4262, and moved with the Yeomanry out to Egypt in 1916. In March 1917 the Pembroke Yeomanry was merged with the Glamorgan Yeomanry to form the 24th Battalion, Welsh Regiment, as part of 231 Brigade, 74th (Yeomanry) Division. The division moved into Palestine, and took part in the Second and Third Battles of Gaza, and it was during the latter, on 6 November 1917, that David was killed. He was 22 years old, and is buried at Beersheba War Cemetery, Israel, in Grave Ref. K. 67. 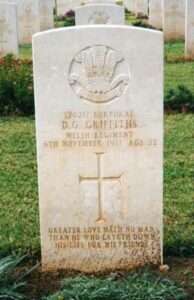 Albert Seymour Lloyd, MM, Gunner, 15757, Royal Field Artillery. Albert was the son of Alderman William George Lloyd and Margaret Anne Lloyd, of Britannia House, Corporation Terrace, Pembroke Dock. He was an Apprentice in HM Dockyard, Pembroke Dock, but enlisted at Pembroke into the Royal Field Artillery. Albert was posted to ‘C’ Battery, 78th Brigade, which was attached to the 17th (Northern) Division. Between 12 to 17 July 1915 the Division landed in France. They spent their initial period of trench familiarisation and then holding the front lines in the southern area of the Ypres salient. Here they took part in fighting at the Bluff during February, 1916 before moving south, where they fought at the Battle of Albert, where the Division captured Fricourt at heavy cost during the opening of the Somme Offensive. They then saw action during the Battle of Arras, at the First Battle of the Scarpe, and it was here that Albert was killed when a German shell crashed into his gunpit near Monchy on 19 April 1917. He was 23 years old, and is buried at Tilloy British Cemetery, Tilloy-Les-Mofflaines, France, in grave ref. I. E. 35. Albert had been awarded the Military Medal for bravery during the Battle of the Somme in 1916. 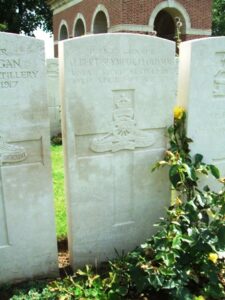 Sidney Picton, Private, 235511, Royal Welsh Fusiliers. Sidney was born at Pembroke Dock in 1887, the son of George and Elizabeth Picton. He married Annie Griffiths of 10, Picton Place, Pembroke Dock on 7 November 1915. Sidney was a Postman prior to the war, and enlisted at Pembroke on 29 November 1915 into the 7th (Cyclist) Battalion, Welsh Regiment. Sidney served in France from 27 July 1917 until being wounded by gunshot on 7 November 1917, and returned home to recuperate. On 22 March 1918 he landed back in France, and was posted to the 9th Battalion, Royal Welsh Fusiliers, which were attached to 58 Brigade, 19th (Western) Division. The Division had been in France since July 1915, and had fought at Loos, the Somme, and at Messines and Passchendaele. In the Spring of 1918 they were in the Ploegsteert Sector when they were hit by the German Spring Offensive, losing many men over the coming days. Sidney was killed here on 18 April 1918, aged 31. He has no known grave, and is commemorated on the Tyne Cot Memorial, Belgium, on Panel 63-65. 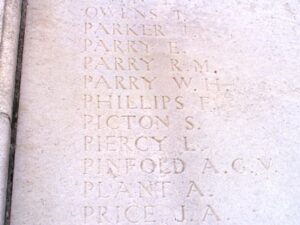 J. Sangham, King’s Liverpool Regiment. There is a cross alongside the name of J. Sangham to show that he fell during the war, but no men of that name are recorded by the CWGC.

Alfred Ernest Simmonds, Petty Officer Stoker, 289127, Royal Navy. Alfred was born on 1 March 1875, the son of Daniel and Mary Simmonds, of Devonport. He was a long serving sailor, and resided with his wife Martha Simmonds) (nee Williams, later White), at Manchester House, Pembroke Ferry, Pembroke Dock. Alfred served aboard HMS Amphion, a scout cruiser, which had been built at Pembroke Dockyard. Alfred was killed when Amphion struck a mine and sank in the North Sea on 6 August 1914. He was 39 years old, and is commemorated on the Plymouth Naval Memorial, Devon, on Panel 3. 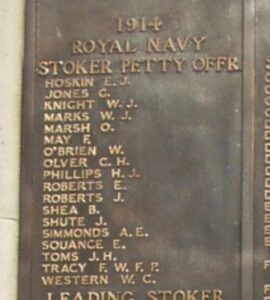 The memorial lists all of the members of the Chapel who served during the war, with symbols beside the names, denoting if they were: Deceased, Wounded or Prisoner of War; and also for awards: Military Cross, Military Medal, Meritorious Service Medal, Mention in Despatches, Croix-de-Guerre. The complete list of the names on the memorial reads, in alphabetical order: