Nash is a parish which sits near Cosheston, about two miles north-east of Pembroke. The church is dedicated to St. Mary, and contains a marble war memorial to the men of Nash and Upton Parish who served and died during the Great War. Private David Owen, a soldier who died during WW2, is buried in the churchyard. 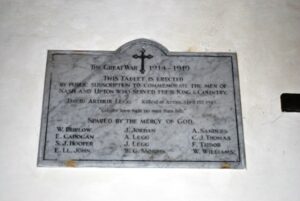 David Arthur Legge, Sapper, 546814, Royal Engineers. David was the son of Andrew and Frances Legge, of Upper Nash. He was a Shoeing Smith prior to the war, and enlisted at Bridgend in April 1915 into the Glamorgan Yeomanry. David was transferred to the 510th London Field Company, Royal Engineers in April 1916. The company was attached to the 29th Division, which had moved to France from Egypt following service at Gallipoli, and took part in the Somme offensive that year. In the spring it 1917 it took part in the Battle of Arras. David was killed at Arras on 13 April 1917, aged 27. He is buried at Feuchy Chapel British Cemetery, Wancourt, France, and is also commemorated on his parents grave at Nash Churchyard. His original wooden grave marker is mounted in Nash Church, next to the war memorial. 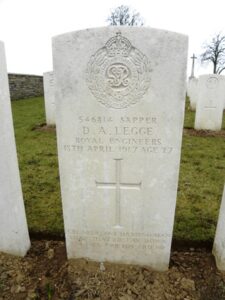 David Oswald Owen, Private, 11423894, Pioneer Corps. David was the son of Mr. and Mrs. Benjamin Owen, of Nash. He married Sarah Ann Cadogan at Nash in 1938. David served with the Pioneer Corps during the war, and he and Sarah seem to have lived at Marston, Oxfordshire. David died at Pembroke on 31 March 1943, aged 39, and is buried in Nash (St. Mary) Churchyard. 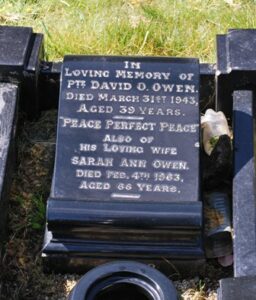