Moylgrove is a village in north Pembrokeshire, about four miles west of Cardigan and St Dogmaels on the Pembrokeshire Coastal Path, in the valley of Nant Ceibwr, about a mile from its outlet into the Irish Sea. The men of the parish who fell during both world wars are commemorated on a slate plaque which is located in the grounds of Moylgrove Church. 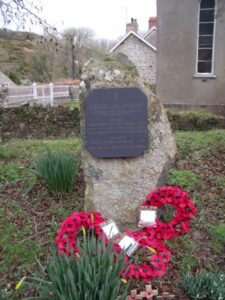 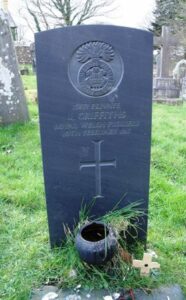 Thomas Owen, Private, 201699, Welsh Regiment. Thomas was the son of David and Jane Owen, of Tynewydd, Moylgrove. He enlisted at Carmarthen into the 4th Battalion of the Welsh Regiment, which was a Territorial Battalion, forming part of the South Wales Brigade. On 17 April 1915 the Battalion was attached to 159 Brigade, 53rd (Welsh) Division, and was sent to Gallipoli, arriving there on 9 August 1915. They gave a good account of themselves on Gallipoli, but when the blizzard of November 1915 hit the Peninsula, the Battalion suffered terrible casualties, necessitating their having to merge temporarily with the 1/5th Welsh, forming the 4/5th Composite Battalion. The Division were evacuated soon after, arriving in Egypt on 23 December that year. For the next eight months the Division guarded the Suez Canal, before moving to Palestine, fighting in the Sinai Desert, and taking part in the First Battle of Gaza in 1917. Thomas was killed in Action during the First Battle of Gaza, on 26 March 1917, aged 38 and is commemorated on the Jerusalem Memorial. 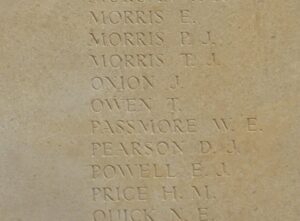 David Christmas Phillips, Private, 36961, Gloucester Regiment. David was the son of David and Rachael Phillips, of Fron, Moylegrove. He enlisted at Cardigan, eventually joining the 10th Battalion of the Gloucester Regiment. On 8 August 1915 the Battalion landed in France as part of the 26th Division, and just nine days later moved into 1 Brigade, 1st Division. The Division fought at the Battle of Loos, before moving to the Somme, fighting in most of the battles which made up the Somme Offensive of 1916. In 1917 they moved to Flanders, and fought at the Second Battle of Passchendaele, where David was unfortunately killed in Action, on 30 September 1917 aged only 20. He is buried in Buffs Road Cemetery, near Ypres. 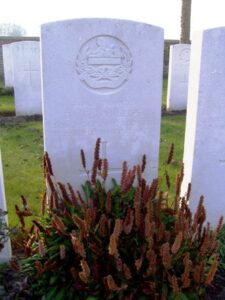 Daniel James, Second Engineer, Canadian Merchant Navy. Daniel was the husband of Mary Hanna James, of Cwmbach, Moylgrove. He served with the Canadian Merchant Navy aboard the M.V. Montrolite, a Montreal registered oil tanker. On 4 February 1942 Montrolite was en route from Trinidad to Halifax when she was torpedoed and sunk by the German submarine U-109. Some of the crew managed to get into lifeboats to escape the burning ship, but two of the lifeboats were lost. Daniel was among the men lost in the sinking. He was 46 years old and is commemorated on the Halifax Memorial, Canada. 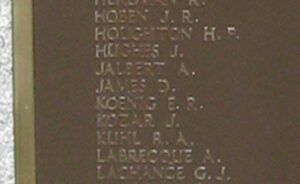