Minwear is a parish situated near Martletwy, about four and a half miles southwest of Narberth. The Parish is situated along the River Cleddau, and contains Picton Castle, which was the family seat of the De Rutzen family. The Parish is served by its church, which is dedicated to St. Womar, and the men of the parish who fell during the Great War are commemorated on a marble plaque inside the church. These men are commemorated on this page. 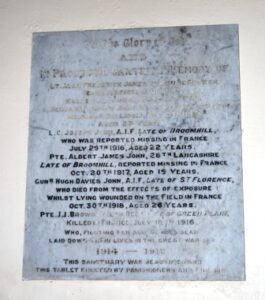 John James Brown, Private, 20552, Welsh Regiment. John was born in 1897, the son of William and Louisa Brown, of Green Plains, Minwere. He enlisted at Haverfordwest into the 15th Battalion, Welsh Regiment, which was known as the Carmarthen Pals Battalion. The Battalion formed at Rhyl at the end of 1914, and in the summer of 1915 moved to Morn Hill Camp, Winchester, as part of 114 Brigade, 38th (Welsh) Division. In December 1915 the Division moved to France, taking up positions in the ‘Nursery Sector’ near Fleurbaix. In June 1916 the Division marched south to the Somme, where they went into action on 7 July 1916, in an attempt to capture Mametz Wood. The first attack was beaten off with heavy casualties to the Welsh, and on 10 July they renewed their assault. The 15th Welsh moved in to the wood on 10 July 1916, and were caught in a maelstrom of machine gun and sniper fire. John was killed in the wood on 11 July 1916, aged 18. He has no known grave, and is commemorated on the Thiepval Memorial, France. 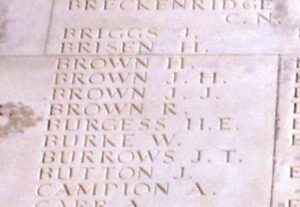 Albert James John, Private, 45482, Lancashire Fusiliers. Bertie was born at Broomhill, Minwear on 20 October 1898, the son of David John and Catherine Ann John (nee Lewis). The family later resided at St. Florence, and Albert was educated at Greenhill Grammar School. At some time during the war the family had moved again, to Amberley House, Pembroke. Albert enlisted at Carmarthen into the Pembroke Yeomanry, and at some time after 1916 was posted to France, joining the 18th Battalion, Lancashire Fusiliers. The battalion was attached to 104 Brigade, 35th Division, and saw its first major action on the Somme. After being drastically re-manned, the Division then went back into the line, and followed the German Retreat to the Hindenburg Line in March 1917. Later in the year they moved north to Ypres, and fought at the Second Battle of Passchendaele. Albert was killed in action at Passchendaele on 22 October 1917, aged 20. He has no known grave, and is commemorated on the Tyne Cot Memorial, Belgium. He had originally been reported as missing two days prior to the official date of his death. His brother Joseph also fell. 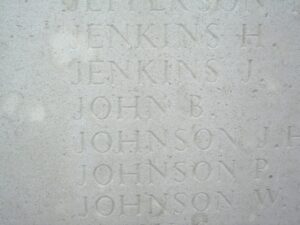 Benjamin Davies John, MID, Private, 2153, Australian Infantry. Benjamin had been born in Amroth in September 1888, and was the son of Mrs. Caroline John, later of Martletwy House, Templeton. He had emigrated to Australia with his sister and cousin Hugh prior to the war where he worked as a Farm Hand. Benjamin had then served for four years with the 25th Australian Light Horse, before transferring to the 11th Battalion, Australian Infantry. The battalion formed part of 3 (Australian) Brigade, 1st Australian Division, and on 25 April 1915 had landed at Anzac Cove, Gallipoli, where it was to remain for the next seven months. Benjamin landed on Gallipoli as part of a batch of the 6th reinforcements to his battalion on 7 June 1915, and soon got noticed for his bravery, being Mentioned in Despatches within weeks of landing. Sadly though, Benjamin was killed during the initial phase of the famous Battle of Lone Pine, on 6 August 1915. He was 26 years old, and was buried by Padre T. G. Robinson in Shell Green Cemetery, Gallipoli, where he still lies today. 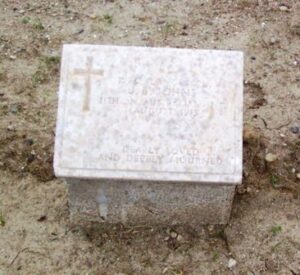 Hugh Davies John, Gunner, 3123, Australian Field Artillery. Hugh was the son of William Davies John and Sarah Catherine John, of Cresselly Shop. He had emigrated to Australia with his cousin Benjamin prior to 1914, where he worked as a Farmer. By the summer of 1915 the Australian Imperial Force was making a name for itself during the fighting at Gallipoli. Many young Australians flocked to join the AIF, to take part in this great adventure that the propaganda had promised them, and so on 25 June 1915 Hugh enlisted at Blackboy Hill into the Australian Infantry, after being turned down from the Light Horse. After training, Hugh was posted to the 10th Reinforcements for the 16th Battalion, AIF, and embarked at Fremantle aboard HMT Themistocles on 13 October 1915 bound for Egypt. Early in 1916 the Australian battalions that had fought on Gallipoli were divided up to double the size of the AIF, with half the men going to the new battalions, and the positions being taken up by reinforcements. As a result, Hugh was posted to the 48th Battalion, AIF. His service papers then show a long history of illness, with several spells in hospitals in England over the coming months. In June 1917 he was posted to the 7th Field Artillery Battery, Australian Field Artillery, and in August was shot in the buttocks while fighting at Ypres. Again Hugh was hospitalised, and it was not until February 1918 that he was back in France, but he was soon in hospital ill again. Yet again Hugh returned to action, but was wounded for a second time during October 1918, during the fighting around the Hindenburg Line, and returned home for treatment at the Red Cross Hospital, Sittingbourne. Hugh died of pneumonia there on 30 October 1918. He was 26 years old, and was brought home for burial at Minwear (St. Womar) Churchyard, Wales. 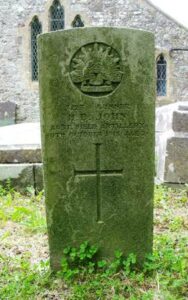 Joseph Davies John, Private, 645, Australian Imperial Force. Joseph was born at Broomhill, Minwear, Narberth in 1893, the son of David and Catherine Ann John. The family later resided at St. Florence, and Joseph was educated at Greenhill Grammar School. Joseph had emigrated to Australia with his cousins in 1910, aged only 17, and enlisted at Perth, NSW on 12 March 1915 into the 28th Battalion, Australian Infantry, who were attached to 7 Brigade, 2nd Australian Division. Joseph landed on Gallipoli on 5 September 1915 and was wounded in the thigh two weeks later, which required him to be evacuated and sent to Egypt for treatment. On 15 January 1916 Joseph returned to his unit, and on 16 March 1916 the Battalion embarked at Alexandria to France, disembarking at Marseilles on 21 March. In France, the Australian Imperial Force were posted to the line near Fleurbaix, where they were initiated into the rigours of trench warfare on the Western Front. In mid July, the ANZACS were sent to the Somme, where they were to take the formidable German positions at Pozieres Ridge. The first attack was carried out successfully by the First Division, and on 27 July 1916, the Second Division replaced them at Pozieres. Joseph was posted as missing during the continued fighting at Pozieres, and was finally certified as Killed in Action on 29 July 1916. He was 22 years old, and is remembered on the Villers-Brettoneaux Memorial, France. His brother Albert also fell. 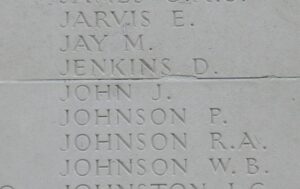 Baron Alan Frederick James de Rutzen, Lieutenant, Pembroke Yeomanry. Alan was born near Llangadog in 1876, the son of Sir Albert de Rutzen and Horatia Augusta Stepney de Rutzen. In 1908 he married Eleanor Etna Audley Thursby-Pelham, and the couple resided at Picton Castle and Glanmarlais Park. Alan joined the Pembroke Yeomanry at the outbreak of war, and went to Egypt with them in March 1916. He volunteered to serve with the Imperial Camel Corps, which had initially been formed as a raiding force, to counter the threat of hostile Senussi Tribesmen. Alan led the 6th Company, Imperial Camel Corps, and was killed during an engagement against the Turks near Katia on 7 August 1916, aged 40. He is buried at Kantara War Memorial Cemetery, Egypt. His only son, Alan, was killed during World War Two. 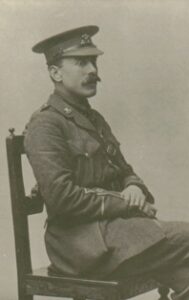 Baron John Frederick Foley De Rutzen, Major, 72466, Welsh Guards. John was the only son of Baron Alan Frederick James de Rutzen, and Baroness Eleanor Etna Audley de Rutzen, of Ridgeway, Pembrokeshire. He married Sheila Victoria Katrin Philipps prior to the war, and the couple resided at Picton Castle. John was commissioned into the Welsh Guards, becoming a Major with the 3rd Battalion, Welsh Guards. The battalion was an armoured unit, and fought in the North African campaign. In 1944 it took part in the invasions of Sicily and Italy. Alan was mortally wounded whilst leading a platoon on the Bataglia Ridge, and died on 11 October 1944, aged 36. He is buried at Santerno Valley War Cemetery, Italy.