St. Francis of Assisi’s Roman Catholic Church in Milford Haven is located at Priory Road. Inside the Church is a small wooden war memorial plaque, which commemorates the six members of the Church who fell during the Great War. Two of these men were Belgian refugees, and the Church also contains a marble plaque containing the Eight Beatitudes, which was presented to the Church after the war by the grateful Belgian refugees who had lived and worked at Milford during the war. Near the church is a marble obelisk, which was donated to the townspeople of Milford Haven as a gift of gratitude from the grateful Belgian refugees who moved to the town. 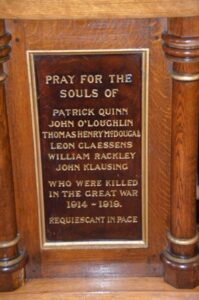 Leon Claessens, Adjutant, Belgian Army. Leon was the son of Adolph Claessens, a Belgian refugee who had been in charge of Antwerp Harbour prior to escaping with his family to Britain in 1914. Leon had lived at Milford for a while with his parents before returning to Belgium to enlist into the Belgian Army. He had been rapidly making his way up through the ranks during his short time at war when he was killed during the summer of 1918, aged 21. Nothing more is known of him.

John Klausing. John cannot presently be identified, but a Belgian Skipper, Louis Klausing, of the steam trawler Princess Marie Jose, based at Milford, became the first Belgian to be awarded the Distinguished Service Cross for services at sea. He attacked a German submarine which was firing on another trawler, thanks to the help of a British gunner who had been posted aboard his ship.

Thomas Henry McDougall, Second Hand, 2414SA, Royal Naval Reserve. Thomas was born on 3 March 1892, the son of Thomas and Mary Rea McDougall, of Glasgow. He was based at Milford during the war, and married Winifred A Shanahan, of 43, Great North Road, Milford Haven, in 1915. Thomas served aboard HMPMS Ludlow, which was a Patrol Ship, operating in the North Sea. Thomas was killed when Ludlow struck a mine on 29 December 1916. He was 23 years old, and is commemorated on the Plymouth Naval Memorial, Devon.

John Patrick O’Loughlin, Bombardier, 51134, Royal Field Artillery. John was born in Clare, Ireland, and was the son of Joseph and Margaret O’Loughlin, who moved the family to Telegraph Cottage, Milford Haven. John was an early enlistee into the Royal Field Artillery, and was posted to their 46th Brigade, which was attached to the 14th (Light) Division. The Division was to see its first action during the Action of Hooge, where the Division were the first to be attacked by the German use of flamethrowers. They then fought at the Second attack on Bellewaarde. John had barely been in France for a few weeks when he was killed on 25 April 1915. He was 21 years old, and is buried at Vieille-Chappelle New Military Cemetery, Lacoutre, France. 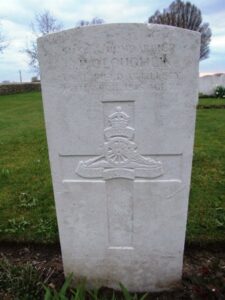 Patrick Quinn, Lance Corporal, 6827, Royal Irish Rifles. Patrick was the son of Thomas and Catherine Quinn, of 17, Great North Road, Milford. He enlisted at Haverfordwest into the Army, and joined the 2nd Battalion, Royal Irish Rifles, which was attached to 74 Brigade, 25th Division. The Division landed in France on 26 September, 1915, and were posted to the Vimy area, where they defended Vimy Ridge against a German attack in May 1916. They then moved to the Warloy area and attacked on 3 July near Thiepval. Patrick was killed near Thiepval on 9 July 1916, aged 35. He is one of the 74,000 missing of the Battle of the Somme, and is commemorated on the Thiepval Memorial, France. 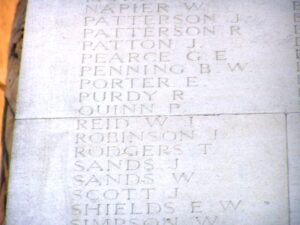 William Rackley, Mate, Mercantile Marine. William was the son of John and Elizabeth Rackley, of Brixham, Devon. He married Susan Avery Michelmore in 1883, but she sadly died just three years later. William had served at sea for many years prior to moving to Milford by 1911. When war was declared William was posted aboard the Brixham registered Fishing Vessel Friendship, which was owned by Tom Jenkerson of Milford. On 13 February 1917 Friendship was working off The Smalls when she was captured by the German submarine UC-65, and the crew of four took to the life raft. They were never picked up, and the Friendship was scuttled. William was 57 years old when he died and is commemorated on the Tower Hill Memorial, London.

The plaque below was a gift from the Fishermen of Ostend to the Catholic community of Milford Haven in gratitude for the hospitality they received during their exile from Belgium during the Great War, 1914-1918: 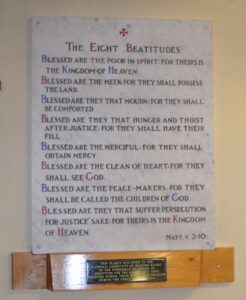 THE EIGHT BEATITUDES OF JESUS

“Blessed are the poor in spirit,

for theirs is the kingdom of heaven.

Blessed are they who mourn,

for they shall be comforted.

Blessed are the meek,

for they shall inherit the earth.

Blessed are they who hunger and thirst for righteousness,

for they shall be satisfied.

Blessed are the merciful,

for they shall obtain mercy.

Blessed are the pure of heart,

for they shall see God.

Blessed are the peacemakers,

for they shall be called children of God.

Blessed are they who are persecuted for the sake of righteousness,

for theirs is the kingdom of heaven.” 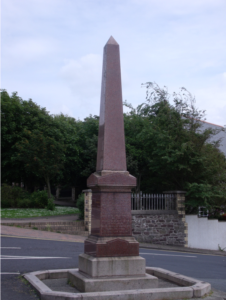