The Pembroke Royal Garrison Artillery was a unit of the Territorial Force, which was created to provide protection for the important Dockyards at Pembroke Dock and Milford Haven prior to the Great War. In 1914 the Pembrokeshire Royal Garrison Artillery (T.F.) was stationed at the Defensible Barracks at Pembroke Dock, the Commanding Officer being Lt. Col. R.V.L. Lloyd Phillips DSO. Many local men thus served with the unit, and at the outbreak of war, being already well-trained men, they were used to supply men to other Gun Batteries on the Western Front. The War Memorial to the men of the Milford Haven Company of the Pembroke RGA who died during the Great War takes the form of a marble plaque, which is situated at Milford Haven. Many thanks to Shaun Butler for locating and photographing the War Memorial to these gallant men. 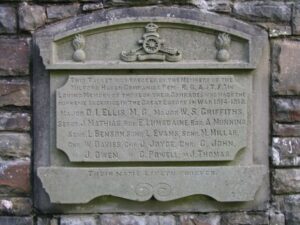 Lionel William Richard Benson, Gunner, 371219, Royal Garrison Artillery. Lionel was the eldest son of William Walter and Mary Anne Benson, of Gaspard House, Clarbeston Road, Tenby, and was a pre-war Territorial with the Pembroke RGA, before transferring to 68th Siege Battery, RGA. This Battery moved to France on 31 March 1916, as part of the 35th Heavy Artillery Group, and moved to positions north of the River Somme, in support of the 46th (North Midland) Division at Gommecourt. The battery fought throughout the Somme Offensive of 1916 before being moved north to take part in the Battle of Arras. Lionel was mortally wounded at Arras, when a German shell crashed into a dug-out occupied by himself and three other men, two of whom were from Milford and were killed in the explosion. Lionel was evacuated to the Military Hospital at Le Havre for treatment, but sadly died of wounds that same day, on 30 April 1917. He was 23 years old, and is buried at Ste. Marie Cemetery, Le Havre. 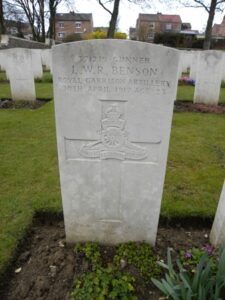 William Davies, Gunner, 447, Royal Garrison Artillery. William was the son of William and Ellen Davies, of Upper Road, Thornton, Milford Haven, and was a pre-war Territorial with the Pembroke RGA, before transferring to 68th Siege Battery, RGA. This Battery moved to France on 31 March 1916, as part of the 35th Heavy Artillery Group, and moved to positions north of the River Somme, in support of the 46th (North Midland) Division at Gommecourt. William sadly was not long in France though, as he was killed in action south of Arras on 25 May 1916. He was just 22 years old, and is buried at Fauborg D’Amiens Cemetery, Arras. 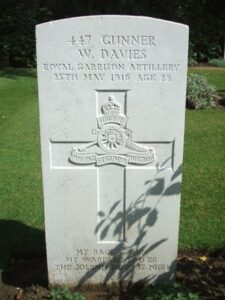 David Ithel Ellis, MC, Major, Royal Field Artillery. David was the son of Captain William Twigge Ellis and Jane Twigge Ellis, of Mill Bank, Trefriw, Carnarvonshire. He had worked as a Clerk at the L.C. & M. Bank, Milford Haven for three years prior to the war, and was mobilised with the Pembroke Battery in August 1914 as a Sergeant. He transferred from the Pembroke RGA into the 285th Brigade, Royal Field Artillery, attached to the 57th (West Lancashire) Division, stationed on the Western Front. David earned a Military Cross for his bravery while his battery was stationed at Ypres, taking part in the Passchendaele Offensive. David’s citation read ‘For conspicuous gallantry and devotion to duty when under an intense and accurate hostile bombardment of his battery. He worked incessantly throughout the night in order to keep his guns in action, by his splendid personal example and devotion keeping up the spirits of his men under circumstances of an exceptionally trying nature. On several occasions he has been the life and soul of his battery under the heaviest shell fire, restoring confidence and cheerfulness at a time when they were most difficult to maintain.’ David was killed while the division was stationed in Flanders during the German Spring Offensive, on 9 April, 1918. He was 24 years old, and is commemorated on the Ploegsteert Memorial, Belgium. 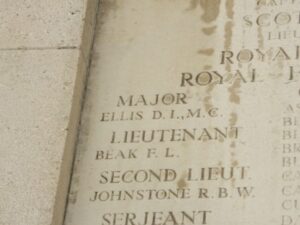 Leslie Evans, Gunner, 371230, Royal Garrison Artillery. Leslie was the brother of Nellie Warr, of 2, Hill Street, Hakin, Milford Haven. He had played football for Milford prior to the war, and was another man of the Pembroke RGA to join the 68th Brigade, RGA. Leslie was wounded during the latter stages of the Battle of Arras. Leslie was evacuated to the Base Hospital at Wimereux, where he sadly died of his wounds on 3 May 1917, aged 26. Leslie is buried at Wimereux Communal Cemetery, France. 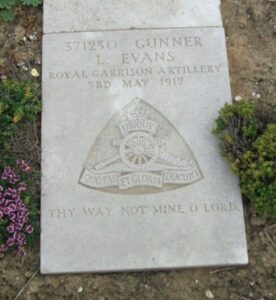 William Starbuck Griffith, Major, Royal Army Medical Corps. William was born at Milford in 1868, the son of Doctor George Griffith, and of Mary Anne Griffith (nee Starbuck). He followed in his father’s profession, and trained as a Doctor prior to marrying Ada Mabel Tweedie at Edinburgh in 1902. William also served as Medical Officer with the Pembroke Battery, Royal Garrison Artillery, and resided at Milford House, Milford Haven. William served with the Battery during the early months of the war, based at South Hook Fort, but was suffering from ill health, and took leave to attend a specialist clinic in London.  William died at a Nursing Home in Swansea on 23 July 1915, aged 47, and was buried with full military honours at Milford Haven Cemetery. 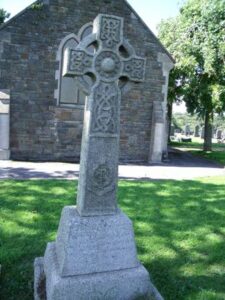 G. John, Gunner, Royal Garrison Artillery. There is no record of a G. John as having died during the Great War while serving with an Artillery Regiment, so presently this man cannot be identified.

James Frederick Joyce, Gunner, 371334, Royal Garrison Artillery. James was the son of Joseph and Emma Joyce, of Milford Haven. He had transferred into the 171st Siege Battery, RGA which formed at Pembroke Dock on 13 May 1916 comprised of all local men, and embarked with the Battery to Italy, where they fought on the Italian Front against the invading Austrian Forces. James was wounded while fighting on the Asiago Plateau in Italy and died there on 3 September 1918. He was 21 years old, and is buried at Barenthal Military Cemetery, Italy. 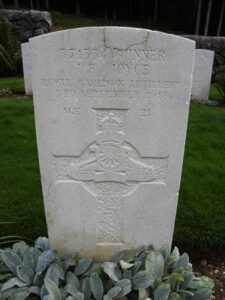 Edward James Lumsdaine, Corporal, 48, Royal Garrison Artillery. Edward was born in Cornwall in 1882, the son of James and Caroline Lumsdaine. The family had lived at Milford for many years prior to settling at 1, White Street, Swansea. Edward married Mary Daly at Swansea in 1902, and the couple resided at Milford, where Edward worked as a fish packer. He was a long serving Territorial soldier, having served since 1902, and was the holder of the Territorial Force Efficiency Medal. Edward served on home service at Stack Rock, but the conditions at the fort took a heavy toll on his health, and he was invalided to Pembroke Dock Military Hospital suffering from pains in his side. Edward was diagnosed as suffering from laryngitis, and returned to duty at Stack Rock, but his condition worsened, and he was sent to Newport Military Hospital, where he died of tuberculosis on 28 August 1916, aged 34. Edward is buried at Swansea (Danygraig) Cemetery. Two of his brothers also fell during the war. 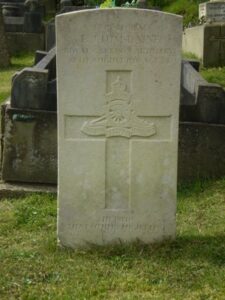 John Mathias, Sergeant, 45, Royal Garrison Artillery. John was the son of Thomas and Margaret Mathias, of Milford Haven. He was serving with the 1st Volunteer Battalion, Welsh Regiment when he enlisted at Milford in April 1908 into the Pembroke Company, Royal Garrison Artillery. John lived with his wife, Mary Mathias, at 175, Robert Street, Milford Haven. He was on home service at South Hook when he took ill with a gastric ulcer, and began to rapidly lost weight, which required him being hospitalised. John was returned home at the request of his family on 13 November 1915, and died of sickness at home on 18 November 1915, aged 41. John is buried at Milford Haven Cemetery. 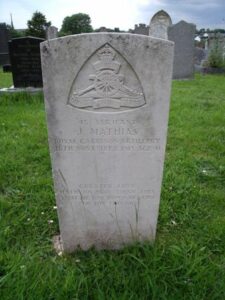 Maurice Miller, Gunner, 371383, Royal Garrison Artillery. Maurice was the son of George and Mary Ellen Miller, of 90, Charles Street, Milford Haven. He enlisted at Milford into the Pembroke Royal Garrison Artillery, and was posted to France with the 68th Siege Battery, RGA. Maurice was one of three Milford men killed when a German shell struck their dug-out during the Battle of Arras on 30 April 1917. Maurice was just 21 years old, and is buried at Ste. Catherine British Cemetery, Arras, France.

Arthur George Munning, Bombardier, 371111, Royal Garrison Artillery. Arthur was born at Gorleston, Norfolk, the son of Charles and Hannah Munning. By 1911 the family was residing at 12, Hakin Point, Milford Haven. Arthur enlisted at Milford Haven into the Pembroke RGA. He also served with the 68th Siege Battery, RGA, and survived the Battles of the Somme and Arras, before being killed in action during the German Spring Offensive on the Somme on 5 April 1918. Arthur is buried at Ribemont Communal Cemetery Extension, France. 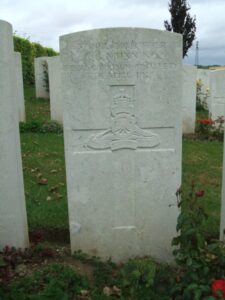 James Owen, Gunner, 371069, Royal Garrison Artillery. James was born at Steynton, the fourth son of John Owen. He enlisted at Milford into the Pembroke RGA. James transferred to the 68th Siege Battery, RGA, moving to France on 31 March 1916. James was one of three Milford men killed when a German shell struck their dug-out during the Battle of Arras on 30 April 1917. He is buried at Ste. Catherine British Cemetery, near Maurice Miller, one of the other men killed that day. 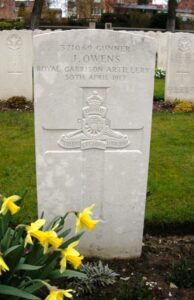 Cyril Powell, Gunner, 371234, Royal Garrison Artillery. Cyril was the son of George and Sarah Powell, of 184, Robert Street, Milford Haven. He transferred from the Pembroke RGA to the 354th Siege Battery, RGA which served as part of Z Corps, attached to the Australian Corps Heavy Artillery. During the summer of 1918 the Australian Corps launched a huge offensive near Villers Brettoneux; south of the River Somme, and on 8 August, 1918 captured the village of Villers Brettoneux from the Germans, beginning a drive which would ultimately win the war. Cyril was killed in action here while his Gun Battery was laying down a barrage in front of the advancing Australians, on 11 August 1918. He was just 19 years old, and is buried at Heath Cemetery, Harbonnieres, France. 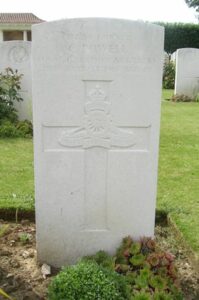 James George Thomas, Bombardier, 371331, Royal Garrison Artillery. James was born in 1897, the son of John and Elizabeth Thomas, of Fair View, Priory Hill, Milford Haven. He enlisted at Milford into the Pembroke RGA. He transferred to the 11th Siege Battery, RGA which was sent to France on 21 April, 1915, where it became attached to the Canadian Corps. James was with the Battery when it was firing the artillery barrage for the famous Canadian assault on Vimy Ridge in 1917. The Battle of Arras was the main battle that the assault on Vimy formed part of, and James was killed in action later in the battle, on 24 May 1917, aged 19. He has no known grave, and so is commemorated on the Arras Memorial, France. 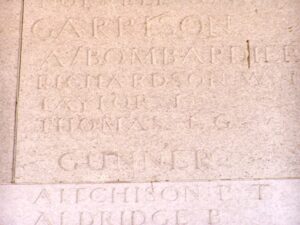