Together with Pembroke Dock, Milford Haven was a strategically important Royal Naval base during the Great War due to its location and capability of being used for a wide variety of vessels. The base, known as HMS Idaho, was home to a large number of patrol craft and Q-Ships, which were used on anti-submarine patrols, the most famous being HMS Prize, the ship commanded by William Sanders, VC. Among the craft based at Milford was a small patrol ship, PC 69, which had been built by Workman Clark at Belfast and launched in March 1918. She came to Milford under the command of Lieutenant Commander Guy Sully Owen. On 8 October 1918, just a month before the end of the war, PC 69 was at anchor in the Haven and a small party of men had gone ashore. At about 11.00 am the party boarded a tender and left the mackerel pier at Milford to return to their boat, but while half-way out capsized and sank. Another boat managed to rescue most of the men, but three men were drowned. Their bodies were recovered at various times after the disaster:

Francis Kirkpatrick Lever, Midshipman, Royal Naval Reserve. Francis was born on 7 July 1899, the son of Samuel Vernon Lever and Amy Lever, of 31 Cavendish Road, Blundellsands. His father was related to Lord Leverhulme, the famous politician and industrialist. Francis was granted a commission as Midshipman into the Royal Naval Reserve in 1916 and was posted to Milford Haven, where he served aboard HMS PC 69. Francis was the youngest of the three men drowned during the capsizing of their tender on 8 October 1918. The body of the 19-year-old was recovered from the sea two weeks later and he was buried in grave M. 216 in St. Helen’s Churchyard, Sefton, Liverpool. 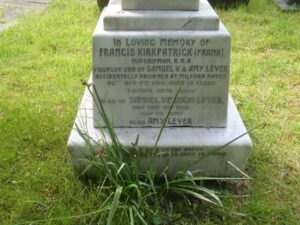 Thomas Andrew Palmer, Leading Seaman, J/787, Royal Navy. Thomas was born at Launceston, Cornwall on 19 November 1891, the son of John Andrew Palmer and Louisa Palmer. His father worked as a carpenter and joiner and moved his family to 9, Quarry Cottage, Honicknowle, Crown Hill, Plymouth. Thomas enlisted into the Royal Navy on 19 November 1909 and over the coming years served aboard a variety of craft, including HMS Donegal and HMS Iron Duke, the flagship of Admiral Jellicoe. On 7 May 1918 he was posted aboard HMS PC 69. Thomas was 26 years old when he drowned during the capsizing of the tender on 8 October 1918. His body was recovered from the Haven and he was buried in St. Budeaux Churchyard and Extension, Plymouth.

Percy William Strong, Able Seaman, J/22485, Royal Navy. Percy was born on 12 April 1897, the son of Albert Henry and Elizabeth Strong, of 47 Pike Lane, Shepton Mallet. He enlisted into the Royal Navy on 12 April 1915 and had served aboard a variety of ships, including the Pembroke Dock built HMS Warrior, before being posted to HMS PC 69 on 7 May 1918. He was 21 years old when he drowned during the capsizing of the tender on 8 October 1918. His body was recovered from the sea and buried in grave K.54. in the new extension in Shepton Mallett Burial Ground.