Middle Mill is a small village situated a mile north of Solva, on St. David’s Peninsula in Pembrokeshire. Within the village is the small Felinganol Baptist Chapel, the burial ground of which contains several war graves and memorials to local men who fell elsewhere. The majority of these men are commemorated on the Solva War Memorial. 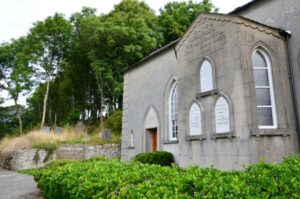 David Evans, Private, 27411, Welsh Regiment. David was the son of James and Martha Evans, of Pentop, Solva, and enlisted at Haverfordwest into the Welsh regiment. After training, he was posted to the 2nd Battalion, Welsh Regiment, which had been in France since August 1914, attached to 3 Brigade, 1st Division. The Division had been one of the first to arrive in France, fighting at the Battle of Mons, and taking part in the retreat to the Marne, where the Germans were stopped. They then fought at the Aisne, and at Chivy, before being moved north to Ypres. Here they fought at the First Battle of Ypres, where they again stopped the German Offensive, before wintering in Flanders, which is where David joined the battalion on 12 May 1915, just after the Battle of Aubers Ridge. David saw his first major action during the Battle of Loos on 25 September 1915, and the subsequent action at the Hohenzollern redoubt. During 1916 the division moved South to the Somme, where they took part in the Somme Offensive. David was killed on 24 August 1916, while the 2nd Welsh were consolidating positions west of High Wood. He was 23 years old, and is buried at Delville Wood Cemetery, Longueval, France. 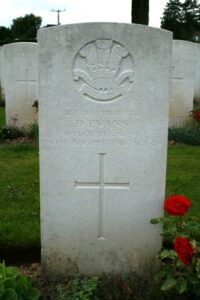 John Morris, Private, 33143, Welsh Regiment. John was the son of Lewis and Elizabeth Morris, of Willow House, Solva, and he lived at Caerau, Glamorgan before the war. John enlisted at Bridgend into the Welsh Regiment. John landed in France on 29 June 1915, joining the 1st Battalion, Welsh Regiment, which was attached to 84 Brigade, 28th Division. The battalion had seen heavy fighting that year, being practically annihilated during April and May 1915 during the Second Battle of Ypres. John joined the battalion at Ridge Wood, near Ypres, where it was rebuilding, in preparation for a move southwards. The Battle of Loos opened on 25 September 1915, and the 28th Division was moved south, taking up the line at Hulluch and Hill 70. John was killed when the battalion was moving into positions at the Hohenzollern Redoubt on 2 October 1915. He was 35 years old, and is commemorated on the Loos Memorial, France. 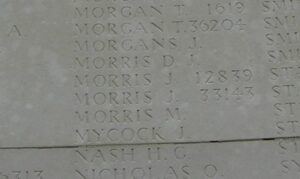 Benjamin Reynolds, Private, 41870, Royal Army Medical Corps. Benjamin was born in 1896, the son of William and Catherine Reynolds, of Wilcox Street, Solva. He was a school teacher prior to the war, and enlisted into the Royal Army Medical Corps at Haverfordwest on 18 October 1914. He served in France with 21 Casualty Clearing Station, RAMC from 26 November 1915 until 28 January 1916, when he was invalided home, suffering from Tuberculosis and Epididymitis. He was discharged from the army on 21 March 1916, and died on 28 May 1917, aged 21. His brother James was killed later that year. Benjamin was accepted for commemoration by the CWGC on Saturday 26 April 2014, as a result of my research. He is actually buried at Felinganol Chapelyard, but I need to get hold of a copy of the burial register in order to prove this to the CWGC. 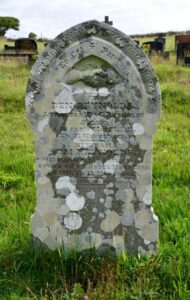 James Reynolds, Private, 28457, Welsh Regiment. James was the son of William and Catherine Reynolds, of Wilcox Street, Solva. He worked as a shop assistant at Haverfordwest prior to the war, and enlisted there on 13 April 1915 into the Welsh Regiment. After training, James was posted to the 18th Battalion, Welsh Regiment, which was attached to 119 Brigade, 40th (Bantam) Division. The Division moved to France during June 1916, and moved to the front near Loos. James was wounded on 6 July, and spent nine months in hospital before rejoining the battalion on the Hindenburg Line. In March 1917 the Germans withdrew to their shortened line, called the Hindenburg Line, and the 40th Division was one of the Divisions that followed the withdrawal. Later in the year they took part in the Battle of Cambrai, playing an important role in the attack on Bourlon Wood. James was killed at Bourlon Wood on 24 November 1917. He was 19 years old, and is commemorated on the Cambrai Memorial, Louverval, France. His brother Ben had recently died at home. 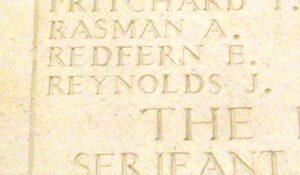 Henry Stephen Roach, Private, 28103, Welsh Regiment. Henry was the son of David and Phoebe Jane Roach, of Brynteg, Solva. He enlisted at Haverfordwest into the Welsh Regiment. After training, Henry was posted to the 18th Battalion, Welsh Regiment, which was attached to 119 Brigade, 40th (Bantam) Division. The Division moved to France during June 1916, and moved to the front near Loos. Late in 1916 they moved south to the Somme, and fought at the Battle of the Ancre, and remained in the area over the winter. In March 1917 the Germans withdrew to their shortened line, called the Hindenburg Line, and the 40th Division was one of the Divisions that followed the withdrawal. Later in the year they took part in the Battle of Cambrai, playing an important role in the attack on Bourlon Wood. They remained in the area over the coming months, but were caught here by the German Spring Offensive of 21 March 1918, and fought there at the Battle of St Quentin and retreating back westwards fought at the First Battle of Bapaume. Due to the terrible casualties suffered by the Division here they were sent north to Flanders to rest and rebuild, but in April the Germans launched an offensive in Flanders, and the 40th Division was caught up in the thick of it again, fighting at the Battle of Estaires. It was here that Henry was killed on 13 April 1918. He was 20 years old, and is commemorated on the Ploegsteert Memorial, Belgium. 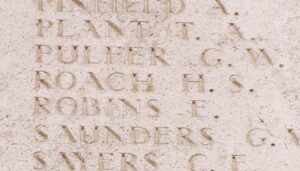 Vaughan Ninian Startin Davies, DSC, Lieutenant, Royal Naval Reserve. Vaughan was born at Solva in 1917, the son of Edward Vaughan Davies and Ruth Davies. Prior to the war, he married Joan Frances Gwendoline MacIntosh, of Levens, Westmoreland, and the couple had two children. Vaughan followed in his father’s footsteps, and volunteered to serve with the Royal Navy from 1935 onwards. Vaughan served aboard HMS Rodney, HMS Cossack and HMS Aurora, until volunteering to become a pilot with the Royal Naval Air Service in October 1940. He trained at HMS Daedalus, the RN Air Station at Lee-on-Solent, prior to becoming a pilot with 815 Squadron Fleet Air Arm, which was based at HMS Grebe, at Dekheila, near Alexandria, Egypt. Vaughan was then posted to 828 Squadron FAA, On 24 January 1942, Vaughan was flying a Fairey Albacore of 828 Squadron, when it went missing off Benghazi, during a flight from Benghazi to Malta. No more is known of his fate. Vaughan was 24 when he went missing that day, and he is commemorated on the Lee-on-Solent Memorial, Hampshire, and also on his parents grave at Middle Mill, Solva. He was posthumously awarded the Distinguished Service Cross ‘For sustained courage, skill and enterprise in many air operations by night and day, against the enemy in the Mediterranean’, which was presented to his wife. 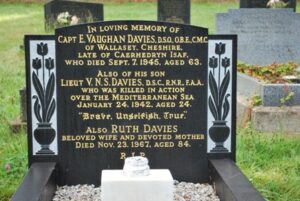 Edward Vaughan Richard Jenkins, Apprentice, Merchant Navy. Edward was the son of Elliot and Barbara Anne Jenkins, of Manor House, Llanrhian. He was an apprentice aboard the S.S. Llanwern, a London registered cargo steamer. On 26 February 1941 Llanwern was attacked and sunk west of Ireland by a German FW200 Kondor aircraft, with the loss of 27 of her crew. Edward was just 18 years old when he was killed in the bombing, and he is commemorated on the Tower Hill Memorial, London. 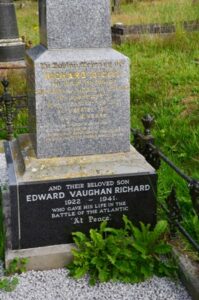 Ieuan Gwyn Thomas, Signalman, 191151, Royal Corps of Signals. Ieuan was the son of William W. Thomas and Mary Ann Thomas, of Solva. He married Violet M. Evans of Solva in 1941. He had served during the war with the Royal Corps of Signals, and died after the cessation of hostilities on 9 December 1945. Ieuan was 30 years old, and is buried at Felinganol (or Middle Hill) Baptist Chapelyard. 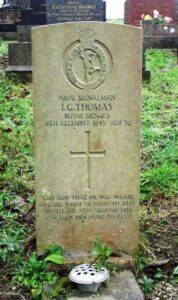