The tiny hamlet of Marros lies on the road between Pendine and Amroth. The War Memorial takes the form of an ancient pair of standing stones, paying homage both to the history of the area, and to the local men who served and died during the Great War. The memorial contains two bronze plaques, one holding the names of the fallen, another holding the names of those who served. Tommy Harries, the father of William Thomas Harries, and the brother in law of Frank James, built the War Memorial at Marros in commemoration of those lost in the First World War. The names of the men who served included eight relations. The stones weighed over one ton each and the work was done for free, the only cost being £25 for the plaques, which were funded by a concert which had been held at Tremoilet School. The stones were allegedly hauled from an ancient earthwork at Marros Mountain! 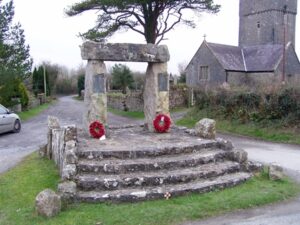 Henry John Lewis, Corporal, 56870, Welsh Regiment. Henry was born in 1895 in Underhill Farm, Marros, the fourth of eleven children of Thomas and Anne Lewis. Henry enlisted into the Pembroke Yeomanry on 29 November 1915, serving as a Private with the service Number 5038, before transferring into the 13th Battalion, the Welsh Regiment in September 1916. The 13th Battalion was attached to 114 Brigade, 38th Welsh Division, and had just been mauled at Mametz Wood during the Somme Offensives. The division was then sent to the Ypres salient, where it held the line at the Canal Bank at Boesinghe for almost twelve months, before taking part in the Battle of Pilckem Ridge, where they captured their objectives under terrible conditions, against the Prussian Guard Division. The 38th Welsh Division then moved back to the Somme sector of the allied lines. There they took part in the defence against the German advances of 1918, before the tide turned and the Allied armies began their great advances toward the end of the war. From 21 August 1918, the division fought their way from Albert to Bapaume, driving the Germans before them, and through to the previously untouchable Hindenburg Line. On 28 August 1918, whilst the 13th Battalion, Welsh Regiment were fighting in the area around Delville Wood, Corporal John Lewis was killed in Action. He was just 23 years old, and was buried in Bulls Road Cemetery, Flers. 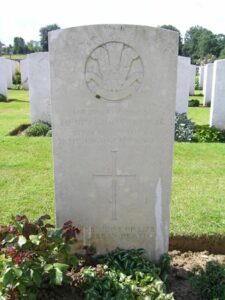 Peter McElroy, Private, 39794, Welsh Regiment. Peter was a Farm Labourer in Marros prior to the outbreak of the Great War. He enlisted on 11 November 1915 at Carmarthen, and served as a Private, number 39794, with the 9th Battalion, Welsh Regiment. Peter landed in France on 3 March 1916, and joined the 9th Welsh at Loos, where it was attached to 58 Brigade, 19th (Western) Division. He fought through the Somme Offensive throughout the summer of 1916, but after the severe winter of 1916/17, being relatively old for the rigours of military service, Peter became ill during December 1916, while stationed near Thiepval, and was evacuated via the 54th Field Ambulance to the 4th Northern General Hospital, and was diagnosed with tuberculosis in February 1917. He was discharged from the Army on 8 March 1917 as no longer fit for war service. His address at demob was given as 32, Bridge Street, Carmarthen and one of the Medical Boards was at Pembroke Dock. Peter died of Tuberculosis at his fathers home at Tregaron, aged 46, on 12 May 1918. He is buried at Tregaron (St. Caron) Churchyard Extension, Ceredigion. 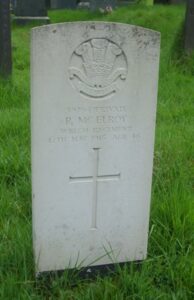 William Arthur Williams, Corporal, 6356, Cavalry. William was the grandson of Martha Richards, of the New Inn, near Marros. He appears to have been the illegitimate son of Martha’s daughter, Leah Jane Williams. William worked as a farm servant for William Ebsworth at Marros Farm before he moved to Ystalyfera and married Gladys Baber, of 22, Canal Street, Ystalyfera, in 1913. William enlisted into the 17th Lancers (Duke of Cambridge’s Own) prior to the war and landed in France on 19 October 1914, joining the 2nd Life Guards, which was under command of the 7th Cavalry Brigade, 3rd Cavalry Division. William joined up with the division in time to take part in the First Battle of Ypres, where the vastly outnumbered BEF stopped the German drive towards the Channel ports by holding the city of Ypres. The division wintered in the Ypres Salient and became caught up in another German offensive just months later, the Second Battle of Ypres, which was launched on 22 April 1915. The opening of the battle was heralded by the first use of poison gas when the Germans launched a gas attack against the French Colonial troops at Gravenstafel. Only brave fighting by the Canadians stopped a break-through, but the battle continued to rage. After weeks of continual fighting, by the second week of May William was in the front line with the 2nd Life Guards near Frezenberg Ridge. At 4 am on 13 May 1915 a heavy artillery barrage opened up on the British line around Ypres, and was followed by a massed attack by the German infantry. During a terrible day of fighting, the 3rd Cavalry Division lost over 90 officers and 1,500 men. William, who was 28 years old, was among those killed on 13 May. He has no known grave and is commemorated on panel 5 of the Ypres (Menin Gate) Memorial, Belgium. His widow Gladys later remarried and lived at 4, Emma’s Buildings, Hill Street, Hull. William does not appear to be commemorated locally, but is named on the Ystalyfera War Memorial.

The Marros War Memorial also lists the names of the men who served during the Great War, but survived:

Some of these men can be identified, with some having more detail than others, due to the availability of some service papers:

A. Bussell was a boy who was working on a local farm. He cannot be positively traced, but an Allen Bushell later lived at Tenby, and served with the Royal Engineers as a Corporal, with the number WR/502159.

Richard James Davies was the elder son of John and Mary Davies, of New Inn, Marros, and was born in Templeton in 1891. He served as a Private, number 20268, with the 15th Battalion, Welsh Regiment. Richard was one of the original members of the 15th Welsh, which was known as the Carmarthen Pals, and landed in France with them on 5 December 1915. He served with the battalion throughout the war, during the fighting at Mametz Wood, and the capture of the Pilckem Ridge, and was demobbed on 6 July 1919, Category Z.

John Thomas Davies was the second son of John and Mary Davies, of the New Inn, Amroth, and was born in Templeton in 1893. John served as a Gunner, with the number 161165, with the Royal Garrison Artillery. He was awarded the British War and Victory Medals for his service, and probably didn’t get to France until 1916.

William Thomas Harries was the son of Thomas Harries, of Pwll Green, Pendine. He served in the Welsh Regiment, was Gassed in France in March 1918 and recuperated in hospital at Woolwich.

S. Howells was probably Thomas, the brother of William Howells, and the son of James and Esther Howells, of Woodreef, Marros.

William Howells was the son of James and Esther Howells, of Woodreef, Marros, and was born in 1894. William served as Private, number 17734, with the 8th Battalion, South Wales Borderers. William arrived in France on 5 September 1915 with the battalion, and then moved from Marseilles to Salonika with them, serving there until the Armistice. He was awarded the 1914/15 Star, British War Medal and Victory Medal for his services.

Francis Lawrence Hughes, of Blackhall, Amroth, was born in Aberystwyth in 1886, the son of David and Mary Hughes, and worked as an Estate Agent. He enlisted at Great Yarmouth in February 1916 into the Royal Garrison Artillery, where he served as a Gunner, service number 72439. Francis attended a course at the Ordnance College, Woolwich, where he passed out as a skilled Fitter. Francis was hospitalised for a while before moving the France, and recuperated at Brimstone Bottom Hospital, which was midway between Tidworth and Ludgershall, Wiltshire. On 29 May 1917 he moved to France where he joined the 337 Siege Battery, RGA. He was wounded by mustard gas during the Battle of Cambrai in December 1917, and sent to the 12th General Hospital for treatment. After recovering he joined 36 Siege Battery, but took ill again soon after, being sent back to England in May 1918. Francis was demobbed on 20 August 1919, and returned to Amroth, where he lived with his sister Gwenllian.

Bertie, Frank and William Henry James were the sons of Margaret James, of The Coach House, Tavernspite;

Bertie James was born on 19 January 1899, and lived at Cabin Farm, Amroth. He served as a Private, number 76032, with the 4th Welsh Reserve Battalion, being too young to serve overseas. He died in 1971, and is possibly buried at Amroth church.

Frank James was born in 1895, and lived at The Cabin, Marros, and served as a Private, number 17736, with the 8th Battalion, South Wales Borderers. He later lived in Bevlin Farm, Llanteg. Frank served in the Home Guard in World War Two, and later died of weils disease, and is buried in Marros church yard.

William Henry James was born on 30 April 1893, and served as a Private with the South Wales Borderers. He later lived at Bevlin. William died in 1976, and is buried at Marros.

William George Lewis was the brother of Henry John Lewis, who was killed while serving with the 13th Welsh. William was 21 years old when he enlisted at Pembroke on 6 September 1914 into the Royal Field Artillery, and was given the number 9757. His occupation was given as Haulier, and his address as Under Hill Farm, Pendine, Laugharne. William attested the following day at Woolwich, and was posted to No. 4 Depot, Royal Field Artillery. On 9 January 1915 he was in France, attached to the 4th Brigade, Royal Field Artillery, and joined the 113 Battery, RFA in the Field on 16 January 1915. William survived the war, and was discharged Class Z on 22 June 1919. He was awarded the 1914/15 Star, British War and Victory Medals for his services.

Benjamin Thomas was the son of James and Margaret Thomas, of Farm Cottage, Marros, and was born in 1889.

David Thomas was the son of James and Margaret Thomas, of Farm Cottage, Marros, and was born in 1887.

Edward Thomas was the son of James and Margaret Thomas, of Farm Cottage, Marros, and was born in 1900.

James Thomas was the son of James and Margaret Thomas, of Farm Cottage, Marros, and was born in 1891. He married Martha Eleanor in Lampeter Velfrey on 18 March 1911, and the couple had two children, James Osbourne and Margaret Elizabeth. James enlisted at Carmarthen in September 1914 and was posted to the 11th Battalion, Welsh Regiment, which was the Cardiff Pals battalion. He served as Private, with the number 13832. James was discharged as being unfit for duty on 18 February 1915.  He later rejoined another Battalion of the Welsh Regiment, and was wounded in France in March 1918. He later lived at Cabin Farm with his family.

William Thomas was the son of James and Margaret Thomas, of Farm Cottage, Marros, and was born in 1895.