Maenclochog is a small village in north Pembrokeshire, close by the villages of Rosebush and Clynderwen, about ten miles north-west of Narberth. Tabernacle Chapel in Maenclochog was erected in 1847, and its three members who fell during the Great War are commemorated on a marble plaque which is located inside the Chapel. There is also a brass memorial plaque to Lieutenant Colonel Edward Denman Cropper, DSO, who had commanded the 9th Battalion, Imperial Yeomanry during the Boer War. The photographs of the memorials were kindly sent in by Mike Berrell. 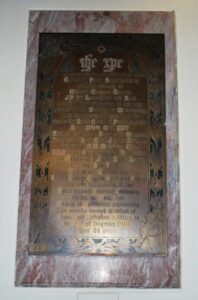 Edward Denman Cropper, DSO, Lieutenant Colonel, 30th (Pembrokeshire) Company, 9th Battalion, Imperial Yeomanry. Edward was the only son of Edward and Margaret Cropper, of Swaylands, Kent, and was educated at Eton. He served in the Zulu War of 1879, as orderly officer to Sir Evelyn Wood, and was present in the engagement at Ulundi, being mentioned in despatches in the London Gazette of 21 August 1879. Two years later he took part in the First Boer War as orderly officer to Sir Evelyn Wood, when he was again mentioned in despatches. He was awarded the Albert medal of the Second Class and the bronze medal of the Royal Humane Society for attempting to save a man by jumping overboard from the steamship “Idaho” on the bar off San Francisco on 6 August 1878. He obtained his commission as Captain in the Pembroke Yeomanry in June 1893, being subsequently granted the rank of Honorary Major, and since February 1900, had been a Captain in the Imperial Yeomanry, serving with the 9th (Col. Howard’s) Battalion, and was wounded by three bullets on 29 December 1900. He was advanced to the rank of Major and Honorary Lieutenant-Colonel in the Pembroke Yeomanry in January 1901. Edward was mentioned in despatches for his services during the Boer War in the London Gazette of 10 September 1901, and was granted the Distinguished Service Order, which was listed in the London Gazette of 27 September 1901, ‘In recognition of services during the operations in South Africa.’ Weakened by his wounds and service in South Africa, Edward died of pneumonia on 29 March 1901, at 29, Wimpole Street, at the age of 46. He is also commemorated on a memorial at Tabernacle Chapel, Maenclochog. 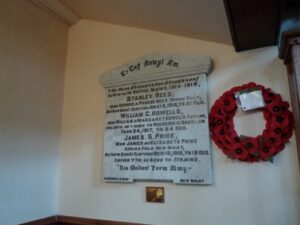 William George Howells, Private, 92196, Nott’s & Derby Regiment (Sherwood Foresters). William was the son of William and Margaret Howells, of Penuchardre, Maenclochog, and had enlisted at Maenclochog into the Army Service Corps, with the service number T/4/185988. He later transferred into the 9th Battalion, Sherwood Foresters, which was back on the Western Front, after fighting on Gallipoli, attached to 33 Brigade, 11th (Northern) Division. The Division then fought at the Battle of Flers-Courcelette during the Somme Offensive, and spent the winter on the Ancre. In June, 1917 the Division took part in the Battle of Messines, and then fought at the Battle of Langemarck during the Third Battle of Ypres. At the end of September they fought at the Battle of the Polygon Wood, then at the Battle of Broodseinde and the Battle of Poelcapelle, before moving south for the winter. William was killed on 25 November 1917 while his battalion was in the line at Loos. He was 24 years old, and is buried at Loos British Cemetery, France. 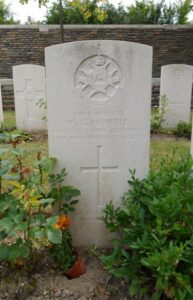 James Salisbury Price, Private, 32061, Welsh Regiment. James was born at Hope, near Leominster in 1897 the son of James and Elizabeth Price. His father was from Spring Field, New Moat, and James spent a lot of time back with his family during the coming years. By the outbreak of war the family was residing at Bristol House, 6, Queen Street, Nantyglo, and James enlisted at nearby Abertillery into the 13th Battalion, South Wales Borderers. James was then transferred to the 16th Battalion (Cardiff City), Welsh Regiment, which was in France attached to 115 Brigade, 38th (Welsh) Division. He probably joined the battalion after it had taken part in the Battle of Mametz Wood in July 1916. The Division had been decimated during its two attacks on the wood, and was transferred to a quieter sector along the Boesinghe Canal at Ypres to rebuild. The 16th Welsh first took up the line here on 19 August 1916, spending the coming weeks alternating between spells in the line and in reserve. James was wounded during these early days at Boesinghe, and was evacuated to Remi Siding Casualty Clearing Station, where he died of his wounds on 15 September 1916, aged 19. James is buried in Lijssenthoek Military Cemetery, Belgium. 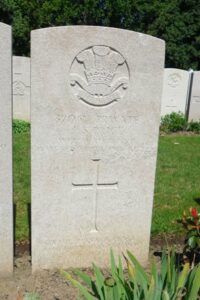 Stanley Rees, Private, 19856, South Wales Borderers. Stanley was the son of George and Phoebe Rees, of Spring Villa, Maenclochog, and enlisted at Tottenham into the 1st Battalion, South Wales Borderers. The Battalion was attached to 3 Brigade, 1st Division, and moved to France at the outbreak of hostilities, and saw its first action at the Battle of Mons, and taking part in the retreat to the Marne, where the Germans were stopped. They then fought at the Aisne, and at Chivy, before being moved north to Ypres. Here they fought at the First Battle of Ypres, where they again stopped the German Offensive, before wintering in Flanders. The following year saw them in action again at the Battle of Aubers, before moving South to Loos, where they fought during the Battle of Loos, and the action at the Hohenzollern redoubt. Again they were required for a major offensive, moving south to the Somme, where they fought during the opening of the Somme Offensive at the Battle of Albert, then at Bazentin, and at Pozières. Stanley was badly wounded at Pozières, and died of his wounds on 22 August 1916. He was 22 years old, and is buried at Flatiron Copse Cemetery, Mametz, France. 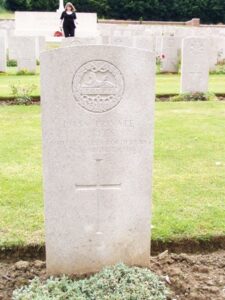