Ludchurch is a small village, situated some five miles south-east of Narberth. The area was well known for the quality of its limestone, which was worked locally. The men of the village of Ludchurch who fell during the Great War are commemorated on seven individual wooden shields, in the form of shields, which hang in the Church of St. Elidyr. These men are commemorated on this page, along with three other men known to have been born at Ludchurch, who for reasons unknown are not commemorated there. Recently these plaques have been moved to a more accessible and fitting location within the Church and are now more sensibly positioned. Photographs of the plaques in their original locations were supplied by Mike Berrell, but the photograph below, showing them in their new location, has been supplied by David Thomas, of Ludchurch. 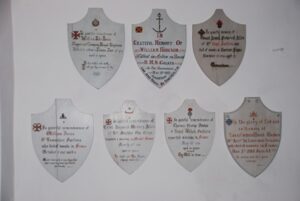 Edward Arnold Frederick Allen, Private, 6386, Royal Fusiliers. Edward was born at Foochow, China, the son of Edward Launcelot Baugh Allen and Blanche Adelaide Allen, of Blackhaldern, Narberth. He enlisted into the 10th Battalion, Royal Fusiliers, which were attached to 54 Brigade, 18th (Eastern) Division. The 10th RF were also known as the Stockbrokers Battalion, due to their main bulk being made up of City businessmen. They transferred to 111 Brigade, 37th (London) Division before moving to France at the end of July 1915, and saw their first major attack during the attack on Gommecourt, which was a diversionary attack for the main Somme Offensive. During the first couple of days of the Somme Offensive, another Division, the 34th, had suffered terrible casualties, and so Edward was transferred to the 34th Division temporarily, along with the other men of 111 Brigade. They then fought at the Bazentin, Pozieres and Flers-Courcelette, before returning to their own Division, when they fought at the Battle of the Ancre. Edward was wounded at the Ancre, and was transferred to the 11th Casualty Clearing Station at Varennes, where he died of wounds on 21 November 1916 aged just 22. Edward is buried at Varennes Military Cemetery. 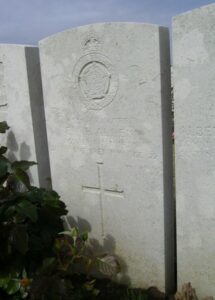 Lionel Raymond Whateley Allen, Lieutenant, South Wales Borderers. Lionel was the younger brother of Edward, and was born in China, the son of Edward Launcelot Baugh Allen and Blanche Adelaide Allen, of Blackadern, Narberth. Lionel had received a commission and served in the 9th Battalion, South Wales Borderers, which had been founded at Pembroke Dock in October 1914 and was used as a Training Battalion. Lionel was attached to a Battalion of the Machine Gun Corps in France, but as yet the unit is unknown. He was reported as wounded during the German offensive near Bapaume on 27 March 1918, and was left behind while his unit was retiring under heavy fire. He was never seen again. Lionel was 21 years old, and is commemorated on the Pozières Memorial, France. 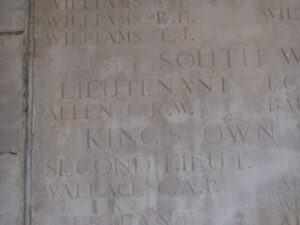 Thomas George Davies, Private, 57511, Royal Welsh Fusiliers. Thomas was born at Ludchurch, and had enlisted at Pembroke into the Welsh Regiment, with the service number 202921. After training, he was sent to France where he joined the 9th Battalion, Royal Welsh Fusiliers, which had been on the Western Front since July 1915, as part of 58 Brigade, 19th (Western) Division. The Division had then fought at the Battle of Loos in September 1915, and in 1916 played an important part in the opening of the Somme Offensive. During 1917 it fought at the Battle of Messines, and at Passchendaele later in the year, before settling down for the winter in the St. Quentin Sector. In 1918 they were caught up in the German Spring Offensive near St. Quentin, where they suffered terrible casualties, and fought at the Battle of Bapaume. They moved to Ypres, but were caught up in the German attack at Messines, and at Bailleul, and Kemmel. After suffering terribly again, they moved south to the quieter French sector to rebuild, but were caught up in the German offensive on the Aisne, and it was here that Thomas was killed on 14 June 1918. He has no known grave, and is commemorated on the Soissons Memorial, France. 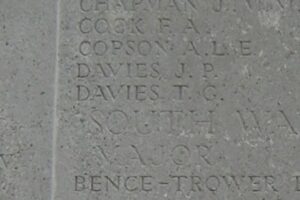 William Davies, Private, 307169, Lancashire Fusiliers. William was born at Bevlin, Llanteg, the son of Lewis Davies and Ann Davies (nee Parry), and resided at Abbey Stream, Ludchurch with his wife Sophia Maria Willday. He enlisted at Carmarthen as a Private into the 2/8th Battalion, Lancashire Fusiliers, with the regimental number 307169. The battalion was part of 197 Brigade, 66th Division. The Division assembled in France in March, 1917 and moved to the Flanders coast, until moved south to take part in the Battles of Third Ypres. They advanced against the German lines during the Battle of Poelcappelle, suffering terrible casualties, one of which was William, who was killed in Action on 9 October 1917. He is buried at Buttes New British Cemetery, inside Polygon Wood. 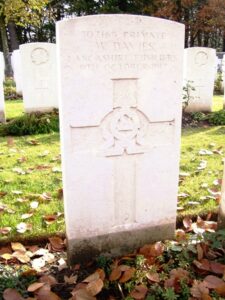 William Hodgson, Leading Cooks Mate, 347770, Royal Navy. William was born at Tenby on 18 May 1888, the son of Harriet Hodgson, and the Brother of Mrs. Ellen Thomas, of Mayfield, Longstone, Stepaside. He was a regular in the Royal Navy, serving aboard H.M.S. Goliath, which was a Canopus Class Battleship, which had been mothballed in 1913, joining the Pembroke Reserve at Pembroke Dockyard When war broke out, Goliath was sent to the East Indies, and undertook operations there against the Konigsberg. On 25 April 1915 the invasion of the Dardanelles took place. Goliath was one of the huge armada of ancient warships that the Royal Navy sent to offer artillery cover to the landing force, and she remained there, playing a vital role in firing her huge guns at the Turkish positions on the Peninsula, but her time was drawing to a close. On 13 May 1915 Goliath was hit by a torpedo from the Turkish torpedo boat Muavanet, and rapidly capsized and sank, taking 570 of her crew to the bottom. William was one of the men who died that day. He was 26 years old, and is commemorated on the Plymouth Naval Memorial. 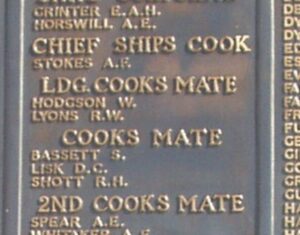 David Hughes, Corporal, 45078, Lancashire Fusiliers. David was the son of William and Mary Hughes, of Beacon, Ludchurch, and had enlisted at Narberth into the Monmouthshire Regiment. After training, he was posted to the 16th Battalion, Lancashire Fusiliers, which was in France attached to 96 Brigade, 32nd Division. The Division had been in France since the end of December, 1915, and the following year took part in the opening of the Somme Offensive, fighting at the Battle of Albert, the Battle of Bazentin, the Battle of the Ancre and the resulting Operations on the Ancre. They remained here over the winter, and in March 1917 followed the German Retreat to the Hindenburg Line. Their next major action was during the First Battle of Arras, after the Germans had launched their Spring Offensive on 21 March 1918. They then moved south, and took part in the Battle of Amiens, where a desperate defence was to prevent the Germans from capturing the vital railway town of Amiens. David was wounded during the fighting that resulted, and was evacuated to the Base Hospital at Etaples for treatment. Sadly he died of his wounds there on 5 May 1918, aged 35, and is buried at Etaples Military Cemetery, France, in Grave LXVIII. A. 35. 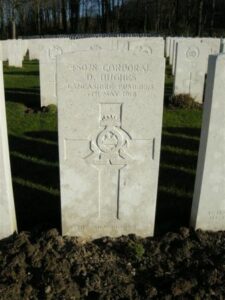 Henry Thomas Hughes, Sergeant, 371118, Royal Garrison Artillery. Henry was born at Ludchurch, and was the husband of Annie Hughes, of Lydstep Village, Penally. He enlisted at Tenby into the 114th Siege Battery, Royal Garrison Artillery. Henry became wounded during the Battle of Arras during spring, 1917, and was brought to the massive Military Hospital at Etaples, where he died of his wounds on 11 May 1917, aged 30. Henry is buried in Etaples Military Cemetery, in Grave XVIII. L. 10. He is not commemorated at Ludchurch, but is named on the Manorbier War Memorial. 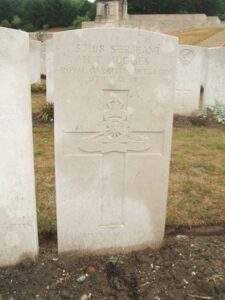 William Herbert Lewis, Lance Corporal, 103485, Royal Engineers. William was born at Ludchurch, the son of Thomas and Mary Ann Lewis. The family later moved to 2, Gwendraeth House, Saron, Ammanford, probably for Thomas to find work in one of the numerous coal mines in the area. William followed his father into the mines after leaving school, working at Pontllanfraith when he decided to enlist into the Royal Engineers on 15 June 1915. After training, William was posted to France on 16 October 1915, and  joined the 178th Tunnelling Company, Royal Engineers. The Tunnelling Companies had been set up in order to carry out the secretive and dangerous tasks of digging shafts beneath German positions in order to lay huge explosive charges, which could be blown at the launching of assaults, opening up large areas of the German front line where the British could then drive through in the hope of a breakthrough. 178th Tunnelling Company had formed on the Somme, where it carried out work in readiness for the Somme offensive of 1 July 1916. In 1918 it was involved in demolition work following the German offensives of March and April 1918, and was tasked with demolition of bridges and other vital activities. William was wounded sometime during this period, and died as a result on 28 May 1918, aged 33. William is buried at Bagneux British Cemetery, Gezaincourt, France, in Grave II. B. 13. For some reason William is not commemorated at Ludchurch. 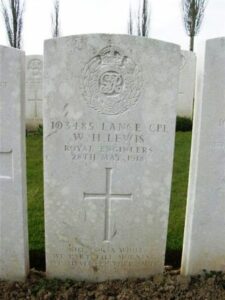 William John Lewis, Sapper, 108017, Royal Engineers. William was born at Llawhaden, the son of John and Mary Anne Lewis. The family resided at Blaencilgoed, Ludchurch prior to the war. William enlisted on 7 April 1915 at Haverfordwest into the Royal Engineers, and was posted to their 123rd Field Company, which was attached to the 38th (Welsh) Division. The Division had arrived in France during December, 1915 and had moved to the sector near Armentieres. They were to remain here until June, 1916 when they were sent to the Somme, charged with the capture of Mametz Wood. The initial assault took pace on the 7th July, but it was almost a week until the wood had been captured, and this was seen as a failure by the British High Command, who ordered the badly depleted Division out of the line. They moved to Flanders, where they were to take part in Third Ypres, and it was here that William was killed in Action, during the build up to the Passchendaele Offensive, on 18 June 1917. He is buried in Bard Cottage Cemetery, Belgium, in Grave II. F. 22. 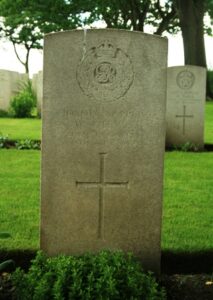 Sidney Vaughan Thomas, Private, 48409, South Wales Borderers. Sidney was born at Ludchurch on 23 January 1899, the son of Margaret Thomas. They later resided at 5, Wells Road Terrace, Narberth. Sidney enlisted at Swansea into the army, and was posted to the 6th Battalion, South Wales Borderers, who were Pioneers to the 25th Division. The Division had fought at the Battles of Arras, Messines and Passchendaele in 1917. November saw them move south again, where they took part in the Battle of Cambrai. They remained in the area over the final winter of the war, and were stationed near Gouzeaucourt when the German Spring Offensive hit the area on 21 March, 1918, at the Battle of St Quentin. Sidney was killed that first morning of the offensive, when he was struck by shell fragments. He was just 19 years old, and is commemorated on Bay 6 of the Arras Memorial, France. Sidney is not commemorated at Ludchurch, but is named on the Templeton War Memorial. 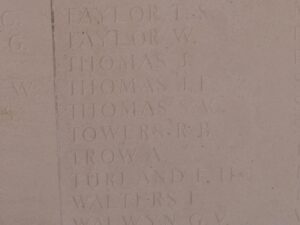