Llanychaer is a small rural village and parish in the community of Cwm Gwaun, situated about two miles southeast of the port of Fishguard. Glandwr Baptist chapel in the village was built in 1894, and contains in its grounds a war memorial, which commemorates two local men who were killed during the Second World War.

There are two other memorials in the immediate area: Cwm Gwaun (Jabes Chapel) Memorial; and Pontfaen (St. Brynach’s Church) Memorial. These are on seperate pages on the website. 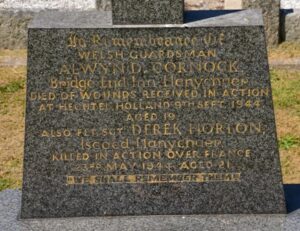 Alwyn Durrant Cornock, Guardsman, 2738554, Welsh Guards. Alwyn was the son of James and Eva Cornock, of the Bridgend Inn, Llanychaer. He served with the 1st Battalion, Welsh Guards, which was part of the 32nd Guards Brigade, Guards Armoured Division. After landing in Normandy in June 1944, the Welsh Guards fought during the break out from the beach-head, and in the drive through France and Belgium. By September the Welsh guards were fighting around Brussels. Alwyn was killed just after the liberation of the City, on 9 September 1944. He was 19 years old, and is buried at Brussels Town Cemetery, Belgium. 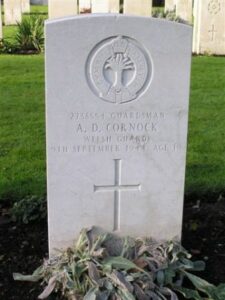 Edward Derek Horton, Sergeant (Flight Engineer), 1851892, Royal Air Force Volunteer Reserve. Edward was the son of Edward and Edith Horton, of Iscoed, Llanychaer. He enlisted into the Royal Air Force Volunteer Reserve and after training as a Flight Engineer was posted to 432 (RCAF) Squadron, RAF. The squadron was attached to 6 Group, Bomber Command, and was equipped with the Vickers Wellington and then the Lancaster II, before converting to the Halifax III and then Halifax VII in 1944 and was based at RAF East Moor. At just after midnight on 23 May 1944 Edward took off from East Moor aboard Halifax III, Serial MZ506, as part of a large force ordered to bomb the strategically important target of the railway terminals at Le Mans. The Wellington was hit by flak whilst approaching its target and crashed near Moncé-en-Belin, killing all eight of its crew. Edward and his fellow crewmen are buried in Le Mans West Cemetery, France. 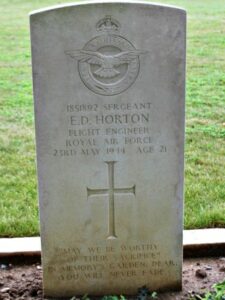