This page commemorates these men of the small village of Llanteg, which sits on the main road between St. Clears and Kilgetty. The village War Memorial is relatively new. As there was no memorial in the village to commemorate the War Dead, the History Group decided to create their own. This War Memorial was commissioned by the History Society in 2003 and designed and worked for free by Mrs Diana John of Ruelwall, being unveiled in February 2004. Thanks to Ruth Roberts for the photo of the Llanteg Memorial. 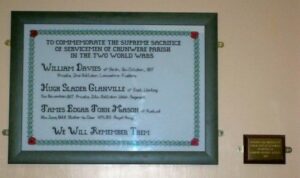 William Davies, Private, 307169, Lancashire Fusiliers. William was born in Bevlin, Llanteg, the son of Lewis Davies and Ann Davies (nee Parry). He married Sophie Maria Wilday in 1905, and the couple resided at Abbey Stream, Ludchurch. Sophie had been working locally as a domestic servant, and was from Devon. William enlisted at Carmarthen as a Private into the 2/8th Battalion, Lancashire Fusiliers, with the regimental number 307169. The battalion was part of 197 Brigade, 66th Division. The Division assembled in France in March, 1917 and moved to the Flanders coast, until moved south to take part in the Battles of Third Ypres. They advanced against the German lines during the Battle of Poelcappelle, suffering terrible casualties, one of which was William, who was killed in Action on 9 October 1917, aged 35. He is buried at Buttes New British Cemetery, inside Polygon Wood. 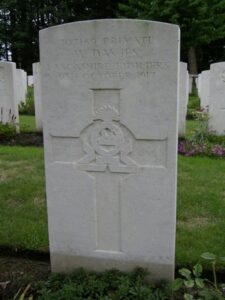 Hugh Slader Glanville, Private, 320299, Welsh Regiment. Hugh was the son of James Cox Slader Glanville and Anna Maria Glanville, of Llanteg. He enlisted at Carmarthen into the Pembroke Yeomanry, with the service number 4286. The Pembroke Yeomanry had formed in Tenby for Home Defence, as part of the South Wales Mounted Brigade. They arrived in Egypt in March 1916, and on 2 February, 1917 were disbanded, joining with the Glamorgan Yeomanry to form the 24th Battalion, Welsh Regiment, as part of 231 Brigade, 74th (Yeomanry) Division. Hugh’s service number then changed to 320299. The Division first saw action during the Second Battle of Gaza. Hugh was wounded during the Third Battle of Gaza, and Died of Wounds on 11 November 1917, aged 26. He is buried at Beersheba War Cemetery. His brother William Leslie Glanville served alongside him, and at the time of Hugh’s death was wounded and in Hospital at El Arish, Egypt. Fortunately William survived the war. A plaque commemorating Hugh has recently been removed from Crunwere Church and installed at Llanteg Memorial Hall. 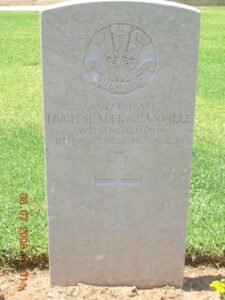 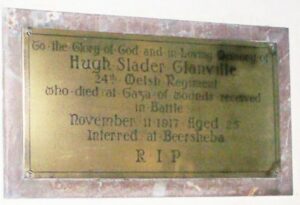 John Lloyd, Private, 101679, Canadian Pioneers. John Lloyd was born on 19 November 1873, the only son of Walter and Mary Lloyd, East Pool Farm, Eglwyscummin. He married Sarah Jane James of Crunwere in 1900 and the family eventually settled at Meline, Lampeter Velfrey. About 1910 John went to Alberta, Canada to work as a miner at a small, newly opened coal mine near Red Deer. On 22 February 1916 John enlisted at Edmonton, Alberta into the 66th Edmonton (Overseas) Battalion, and arrived in England on 7 May 1916. He was posted to 1st Canadian Pioneers and left for France on 5 July 1916. On 6 August 1916 he was posted to 1st Canadian Entrenching Battalion in the field. He paraded sick on 5 December 1916, suffering from exposure to shell fire on the Somme, and was hospitalised for 10 days with V.D.H. and epilepsy, before rejoining his unit. On 3 September 1917 John again reported sick at Vimy Ridge. He had severe pains in his legs and chest and was immediately sent back to base hospital. He had suffered with heart pain and palpitations for some months prior to this. After 12 days treatment at Etaples, John was evacuated to Bethnal Green Hospital for 12 days, then Bromley for 10 days, Buxton 2 months, and to Liverpool for 5 weeks. He then returned to Wetaskiwin, Alberta, Canada, where he received further treatment before being discharged from the service on 17 August 1918, with the intention to live at the GWVA (veterans home) in Edmonton. Sadly John died on Armistice Day, 11 November 1918. He is buried at Lovett, Alberta, Canada. Many thanks to the ladies of Llanteg History Society for identifying John, and for the details from his service papers which enabled me to get him commemorated. 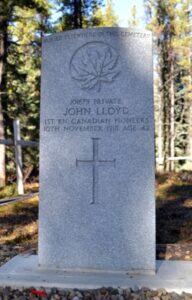 James Edgar John Mason, Stoker I, C/KX 143988, Royal Navy. James was the son of William and Catherine Mary Mason and the husband of Winifred Mabel Eileen Mason, of Ruelwall, Llanteg. He served in the Royal Navy as a stoker aboard the Royal Naval Vessel, H.M.L.B.O.6. The vessel was in fact a device that had been invented purely for the Normandy Landings, and was a Landing Barge, Oil. These Landing Barges came in a huge variety of different types, and were used for several purposes; defence, transportation, supply (of food, water and oil) and repair (fitted out with workshops). Little is known of what happened, but John is reported as having been killed during the continued Normandy Landings  on 14 June 1944, aged just 23. He has no known grave and is remembered on the Chatham Naval Memorial, Kent.