Llanhowell is a small parish about 4 1/2 miles from St. David’s, situated at the base of the St. David’s peninsula. The Parish War Memorial is located inside St. Hywel’s Church, is in the form of a brass plaque and commemorates one man who fell during the Great War and two brothers who fell during World War Two. There is also a separate memorial inside the church which commemorates two members of the Pringle family, one who fell during WW1 and one during WW2. 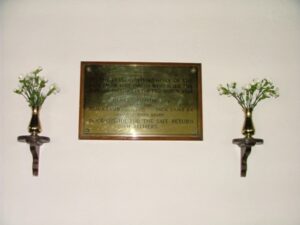 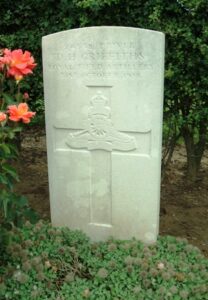 Norman Douglas Pringle, Captain, East Yorkshire Regiment. Norman was born on 16 April 1884 at Angelton, Bridgend, the third son of Doctor Henry Turnbull Pringle, and Jessie Isabella Pringle, of Hawtree, Ferndown, Wirnborne. He was educated at Linton House School, and the Universities of Cambridge and Edinburgh. Norman graduated BA on 6 July 1912, and MA on 30 April 1914. Norman was a member of the Oxford University Contingent of the Officer Training Corps prior to 1915, and was gazetted Captain in the 6th Battalion, East Yorkshire Regiment on 2 February 1915. The battalion was the Pioneer Battalion to the 11th (Northern) Division, and on 1 July 1915 sailed from Avonmouth for Gallipoli via Mudros, and landed at Suvla Bay on 7 August 1915. On the following day, the battalion was ordered to join 32 Brigade, near Chocolate Hill. Norman took command of C Company, and the battalion was order red to attack the Turkish lines at Tekke Tepe. Norman was killed in action during this assault on 10 August 1915. He has no known grave, and is commemorated on the Helles Memorial, Gallipoli. Norman is commemorated on an illuminated memorial at Llanhowell Church. 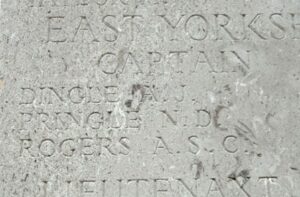 John Lamb, Able Seaman, P/JX 218994, Royal Navy. John was the son of William Main Lamb and Mary Ann Lamb (nee Harries), of Bank House, Croesgoch, Letterston. He served with the Royal navy aboard H.M.S. Hollyhock, a Flower-class corvette, which had been launched on 19 August 1940. On 9 April 1942, Hollyhock was east of Ceylon, in the Indian Ocean, when she was bombed and sunk by Japanese naval aircraft, along with the aircraft carrier H.M.S. Hermes, the Australian destroyer H.M.A.S. Vampire and two tankers. John was 25 years old when he died that day, and is commemorated alongside his ship-mates on the Portsmouth Naval Memorial, Hampshire. 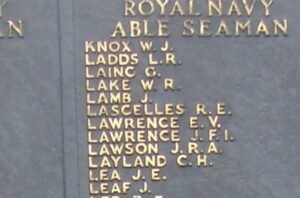 Thomas A. Lamb, Second Engineer, Fishing Fleet. Thomas was the son of William Main Lamb and Mary Ann Lamb (nee Harries), of Bank House, Croesgoch, Letterston. He served with the Fishing Fleet aboard the S.S. Ilfracombe, a Lowestoft registered trawler. Thomas was killed when his trawler was attacked by a German aircraft on 6 September 1940. He was 25 years old, and is buried at Llanhowell (St. Hywel) Churchyard. 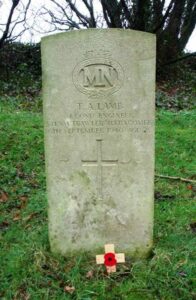 Henry Brian Despard Pringle, Flying Officer (Air Bomber), 134724, Royal Air Force. Henry was the son of Kenneth Douglas Pringle, and the nephew of Norman Douglas Pringle. He served as an Air Bomber with 115 Squadron, Royal Air Force, which was equipped with the Lancaster II, based at RAF Witchford. On the night of 27 January 1944, Henry was one of the crew of Lancaster LL668, which took off as part of a large force of 515 Lancasters and 15 Mosquitos, bound for Berlin. German night-fighters and anti-aircraft fire brought down 33 Lancasters during the raid, one of which was LL668. Henry is recorded as having been killed on 28 January 1944, when his Lancaster crashed at Steinberg, on the western fringes of the Frankenwald. He is buried at Durnbach War Cemetery, Germany, alongside his fellow crew-members, W.W. Ryder, G.W. Rawlinge, R.J. Rouse, H.B.D. Pringle, R.J.C. Iles, A.M. Miller, and P. Neil. Henry is also commemorated on an illuminated memorial at St David’s Cathedral. 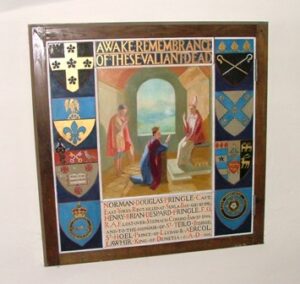